The stock has been stuck in neutral, but is it time to buy?

Shares of Twitter (TWTR 2.25%), much like its monthly active user base, have been stuck in neutral for the last 18 months. While market forces have pushed the stock price higher and lower in that time, shares trade for about the same price they did in April last year. Meanwhile, the market has moved more than 20% higher, and competitors like Facebook (META -0.76%) and Alphabet (GOOG -0.27%) (GOOGL -0.21%) have outperformed.

Some investors may see the relatively beaten-down price of Twitter stock and think it presents a buying opportunity. So let's take a closer look at the company and determine whether it's worth buying at this price -- around $17.50 per share. 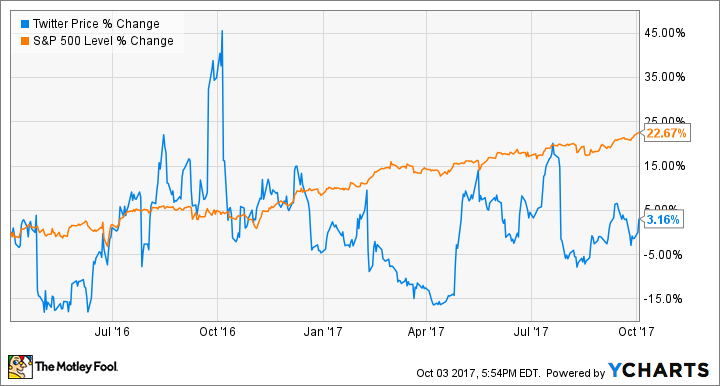 Twitter is a platform for sharing pictures, videos, links, and ideas in 140-character snippets. Users can follow whomever they find interesting -- their friends, their favorite movie stars, athletes, news pundits, or even the president of the United States -- on Twitter. This explicit declaration of interests by its users offers the company excellent data, which it licenses to other businesses and uses to target advertising on the platform.

But competitors like Google and Facebook have similar data sets. Google's interest data is perhaps even more explicit, as its users provide phrases every day to tell Google what they're looking for on the web. Facebook's data is a bit more implicit, as what people do on its app and website give Facebook plenty of information on its users' interests.

But Twitter has been unable to demonstrate the same network effect as Facebook, Google, or even Snap's (SNAP 0.30%) Snapchat. While those businesses continue to grow, Twitter's user growth has stalled. Since the first quarter of 2015, Twitter's monthly user base has increased from 302 million to 328 million. By comparison, Snapchat has grown its daily users to 173 million; last quarter Facebook surpassed 2 billion monthly users; Instagram has over 800 million monthly users; YouTube has over 1.5 billion viewers. Not to mention, the average time spent per user on all the aforementioned platforms is much, much higher than on Twitter.

As a result, Twitter hasn't been able to make much headway attracting the budgets of smaller advertisers; the bulk of its ad revenue still stems from direct sales to big-brand advertisers. Twitter isn't exhibiting any sales and marketing expense leverage, even as it cuts back on its less efficient ad products. While it's been able to attract a lot of advertisers, most of them aren't willing to commit a large portion of their budgets to Twitter when Facebook and Google present better options.

That said, Twitter absolutely deserves a lower valuation than its two larger competitors. Both Twitter's revenue and its adjusted EBITDA are moving in the wrong direction. Twitter expects a decline in both next quarter, and a contraction in adjusted EBITDA margin. Twitter isn't even a break-even company on a GAAP (generally accepted accounting principles) basis, although it expects to hit that mark by the end of the year.

By comparison, Facebook has exhibited strong margin expansion over the last couple years. And as Twitter's EBITDA shrinks, both Facebook and Alphabet continue to grow.

Even at a considerably lower valuation, Twitter does not look appealing as an investment. It doesn't have a competitive advantage compared to Facebook, Google, or even Snapchat, so to start to look interesting, it would need to trade even lower. Even then, it would be a speculative investment, as Twitter isn't in a strong position to grow earnings meaningfully over a long period of time.