Please ensure Javascript is enabled for purposes of website accessibility
Log In Help Join The Motley Fool
Free Article Join Over 1 Million Premium Members And Get More In-Depth Stock Guidance and Research
By Daniel Miller - Oct 6, 2017 at 8:32AM

Ford Motor Company (F 1.71%) delivered positive sales results to investors Tuesday when it bucked a three-month sales slide thanks to a recovery in the Houston market, as well as unusually strong sales of Ford's F-Series throughout September. Let's take a look at the sales figures as well as some key highlights from the September data.

Our September sales were strong across the board – including retail, commercial and government. We're pleased to say recovery in Houston and Florida is moving quickly, with all of our dealers in the area now back up. We couldn't be happier with the tireless effort from our dealers, employees and the countless first responders who are moving so quickly.

Strong across the board, indeed, as Ford posted an 8.7% gain in total vehicle sales to 222,248 during September. While that was driven in part by a 25.1% increase in fleet sales, the total increase was also driven in part by a a 4.4% gain in retail sales. The real MVP was Ford's truck segment, which has seen increased demand in recent years and continues to power total sales higher. Ford's truck segment posted a 19.9% sales gain last month compared to SUVs, which had a modest 1.8% gain, and passenger cars, which recorded a 1.3% decline.

Speaking of Ford's strong truck segment results, the F-Series posted a hugely successful September. Sales of the F-Series jumped more than 21% to 82,302 units last month. Keep in mind that any month the F-Series sells more than 50,000 units is considered a good month, and Ford has only recorded two other Septembers with better sales figures. Not only was it a strong September, but as you can see below it was one of the strongest months in recent years. 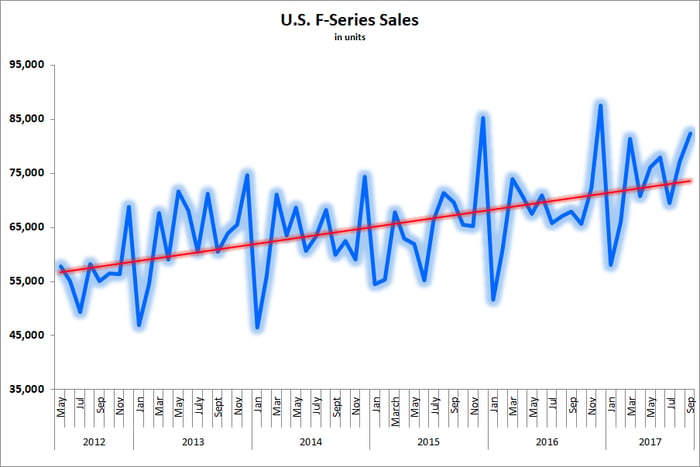 At first glance, investors could be forgiven for assuming Ford's jump in sales was solely due to its 25.1% increase in fleet sales compared to the prior year's September. While fleet sales did contribute, they made up less than a quarter of Ford's total monthly sales, which is better than the nearly 30% year-to-date percentage. Further, during September, Ford's fleet rental sales, generally a less desirable fleet channel, generated only 5.5% of total sales compared to 11.5% year to date. That points to a healthier sales mix for Ford. Lincoln's MKC turned in its best September sales result since its launch with a 17.7% gain compared to the prior year. The MKC, MKX, and Navigator all posted sales gains for the month and carried Lincoln's SUV segment up 10.6% compared to the prior year. Lincoln's Continental, which is having its first full year of sales in the U.S. market, will provide sales support to a weaker car segment, while Lincoln's SUVs can ride increased demand for larger vehicles. The two segments have so far combined to push Lincoln sales nearly 3% higher for the full year, and if the brand can hold on to those gains during the final two months of 2017 it'll be the fourth straight annual gain for Ford's rebounding luxury brand.

Ford posted a welcome jump in sales last month, so with the economy continuing to hum along, recovery demand in Houston, an improving fleet sales mix, and continued strength in its bread-and-butter F-Series, investors should feel optimistic about Ford finishing 2017 on a strong note.