Please ensure Javascript is enabled for purposes of website accessibility
Log In Help Join The Motley Fool
Free Article Join Over 1 Million Premium Members And Get More In-Depth Stock Guidance and Research
By John Rosevear - Oct 1, 2017 at 9:05AM

Ford is adding a new trim line, called Limited, to its Super Duty models for 2018. The price of entry for a Super Duty Limited model starts at just over $80,000 -- and yes, it can get close to six figures in a loaded-up F-450 Limited.

For most of us, a six-figure price tag seems surreal for what is still a Ford pickup truck, albeit a very big and very plush one. What is Ford thinking here? A truck for "boat captains to captains of industry"

As I said back in 2015, when Ford first added the top Limited trim to its F-150 pickup, what Ford is thinking here is simple: profit. Specifically, profit margin.

Pickups aren't just pickups anymore. For many buyers, a pickup is an everyday vehicle, not just a workhorse -- and many of those buyers have the desire, and the means, to buy a truck that's much more luxurious than the rough-riding vinyl-upholstered pickups of old. Those loaded-up trucks have become huge profit generators for Ford and its pickup-truck rivals.

The idea of a luxury pickup isn't a new one. General Motors' (GM -3.40%) Cadillac had one in a limited edition about 20 years ago, as did (briefly) Ford's Lincoln luxury brand. But the idea didn't join the pickup mainstream until 2001, when Ford launched the very first F-150 King Ranch. Ford kicked off the luxury-truck race with its first F-150 King Ranch model in 2001. Now, both of its Detroit rivals have luxury-pickup models as well. Image source: Ford Motor Company.

Ford discovered that some buyers would happily pay up for a truck with luxuries like leather seats and a nice stereo -- options that were very profitable for the Blue Oval. In time, that helped push average transaction prices on Ford's F-Series lineup well over $40,000: It was $45,600 in August.

What goes into these new luxury trucks?

First, we should note that Ford's Super Duty pickups come in three flavors, from the big and very capable F-250 to the really, really big and capable F-450. Each model ascends through several trim lines, becoming more luxurious as the price rises: XL, XLT, Lariat, King Ranch, Platinum -- and now, at the very top of the line, Limited. 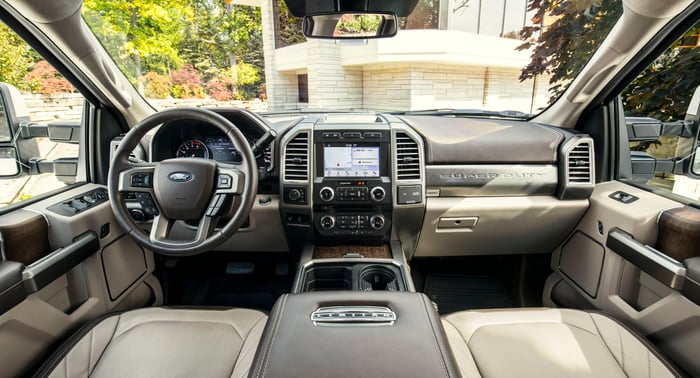 Note that in base trim, there's a significant leap from the F-350 to the F-450. None of the Super Duty models are small, but the F-450 is a long, large, heavy vehicle that is arguably more "truck" than "pickup."

So what do you get for all that money? Just about everything that Ford knows how to stuff into a truck:

That's all on top of the usual Super Duty features, which include serious hauling capabilities. And all of the Super Duty Limited models come with four-wheel drive standard. 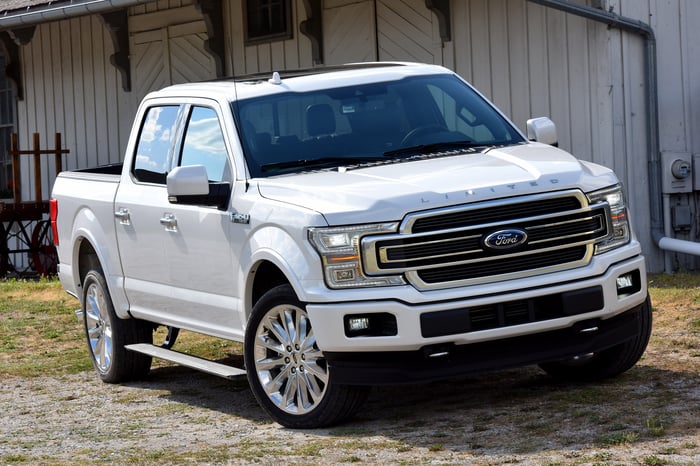 If a Super Duty is too big, Ford will be delighted to sell you a smaller-but-still-not-small F-150 Limited. It starts at just over $60,000. Image source: Ford Motor Company.

Who will buy these things?

I suspect that the Super Duty Limited models won't sell in huge numbers. It's possible that these are to some extent an experiment by Ford. They may be a step too far for many buyers.

But I think it's a safe bet that Ford will sell enough of these to make a tidy profit on whatever the company spent to develop them. There is a clientele for trucks like these: Buyers of heavy-duty luxury trucks tend to be well-to-do people who regularly pull horse or boat trailers, as well as successful entrepreneurs and senior executives in industries in which pickups are an everyday thing, like construction or oilfield exploration.

It's a safe bet that these new trucks will sell, at least as long as the economy remains strong. And if they sell especially well, there's another safe bet: That Ford will try an even-more-luxurious trim line in another few years.