Oil prices steadily climbing for almost two months, along with a big upgrade from an investment bank, have brought buyers back to Transocean.

September was a great month to own shares of Transocean LTD (RIG 2.09%), which gained a very strong 25.7% on the month. If we go back a couple of weeks further, Transocean's stock price jumped a remarkable 48% between August 18 and the end of September.

Two big catalysts have been behind the recent push by investors into the offshore-drilling contractor's stock: higher oil prices and a big vote of confidence by an investment-bank analyst who covers the sector.

Let's start with oil prices. At this writing, Brent crude futures are a little bit above where they were at the start of the year, but through mid-August, oil prices had fallen by almost 20%. Since then, they're up more than 14%.

If you've followed offshore-drilling stocks at all over the past several years, their stock prices have generally moved up and down with oil prices -- at least in the short term. The chart below shows how that has been the case for Transocean over the past six weeks: 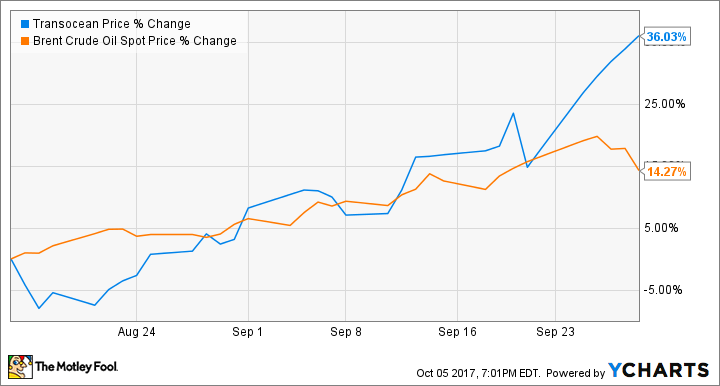 As you can see, Transocean's shares tracked pretty closely with oil prices recently, before diverging in a pretty big way in late September. The biggest catalyst for the gains later in the month came on September 25, when UBS upgraded shares of Transocean and four other offshore drillers.

Even after the recent gains, Transocean is a stock worth buying today, and for many of the same reasons that UBS' analysts stated in their upgrade. This includes expectations that offshore drilling is set to start recovering in 2018 after three of the worst years in the industry's history, which have pushed many drillers out of business, or into bankruptcy. It's pushed others -- including Transocean -- to scrap their oldest vessels in order to lower costs, and generally forced the industry to "right size" its global fleet to meet both current and expected future demand.

It's looking like demand may have bottomed out and could be turning back to growth in coming quarters. There has already been an uptick in bid activity this year, though much of the awarded business has been extensions of existing contracts, not new work for idle vessels. That's on track to change heading into 2018, as the decline in offshore oil output from current production will require new drilling simply to offset.

This should be a boon for Transocean, which has a high-specification fleet of vessels, a very strong balance sheet, and solid management that has led it through the downturn admirably. Even after the big run-up, Transocean's shares trade for less than 30% of book value -- a steep discount, even considering the company will likely scrap and write off more uneconomical vessels before year-end.

Why Transocean Stock Rallied This Week -- and Could Go Higher
376%