Please ensure Javascript is enabled for purposes of website accessibility
Log In Help Join The Motley Fool
Free Article Join Over 1 Million Premium Members And Get More In-Depth Stock Guidance and Research
By Keith Noonan - Oct 6, 2017 at 11:11AM

Fitbit's entry into the smartwatch space boosted the stock in September.

Shares of Fitbit (FIT) climbed 15.4% in September, according to data from S&P Global Market Intelligence. The jump in the company's share price can mostly be attributed to optimism surrounding the unveiling and launch of its Ionic smartwatch line.

Fitbit unveiled the Ionic smartwatch on Aug. 28, highlighting features including a four-day battery life, new health-tracking technologies, and contactless payments. Fitbit also announced a partnership with DexCom to bring glucose-monitoring technology to the Ionic line of watches. The Ionic is an important step for the company as it attempts to expand beyond activity trackers and get a bigger foothold in the broader wearables market.

Fitbit stock also got a lift following a Sept. 26 announcement that the company was one of nine that had been approved for a Food and Drug Administration program that will ease the regulatory approval measures for health and wellness apps, thereby speeding development processes. Faster development timelines could be significant as the company looks to build on the health and wellness functionality of its devices and develop an app ecosystem for its smartwatches. 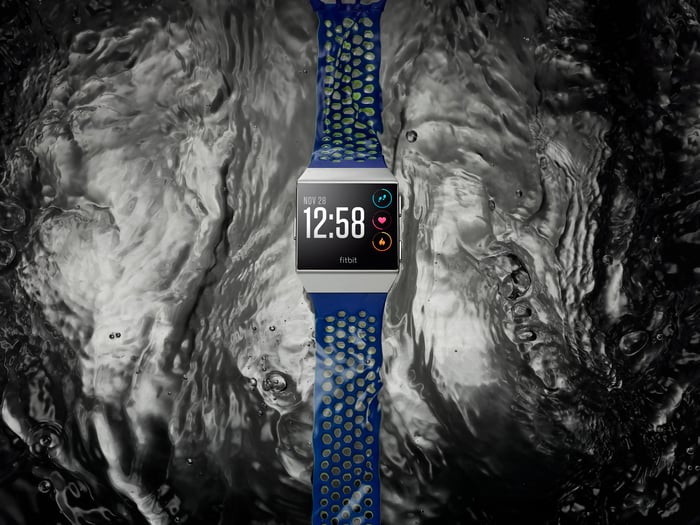 The Ionic smartwatch went on sale Oct. 1 at a retail price of $300. Rather than opt to use a third-party operating system such as Alphabet's Android, Fitbit has developed its own operating system for its smartwatches. This move gives the company greater control over the hardware platform, however it also means that there will be fewer apps available for the devices, which could ultimately impact consumer adoption.

Fitbit's sales have slipped by double digits in each of the last three quarters, and the company expects that revenue for the year will be down between 22% and 29% despite Ionic's fourth-quarter launch. The smartwatch will likely be the deciding factor in whether Fitbit can return to growth next year, so investors should keep a close eye on its performance.