Please ensure Javascript is enabled for purposes of website accessibility
Log In Help Join The Motley Fool
Free Article Join Over 1 Million Premium Members And Get More In-Depth Stock Guidance and Research
By Chris Neiger - Oct 9, 2017 at 11:10AM

The tech giant has long kept the integration of its software and hardware firmly in its own control.

Apple (AAPL -1.80%) has a long history of success that it has built around on the idea that it alone knows best how to integrate its hardware and software. That level of control is why its computers and laptops became a massive success, why its iPods did the same, and, most notably, why its iPhones are the powerhouse among smartphones that they are today.

But this strategy may not be so effective in the smart speaker space. Apple will officially enter this market when its HomePod starts shipping in December, but its chief competitors --  Amazon.com (AMZN -2.49%) and Alphabet's (GOOG -2.57%) (GOOGL -2.45%) Google -- are already firmly in the lead, and both have opened up their devices to developers and third-party partnerships. Apple is keeping the HomePod, along with its Siri virtual assistant, mostly closed to developers -- and that could be a huge mistake this time around. 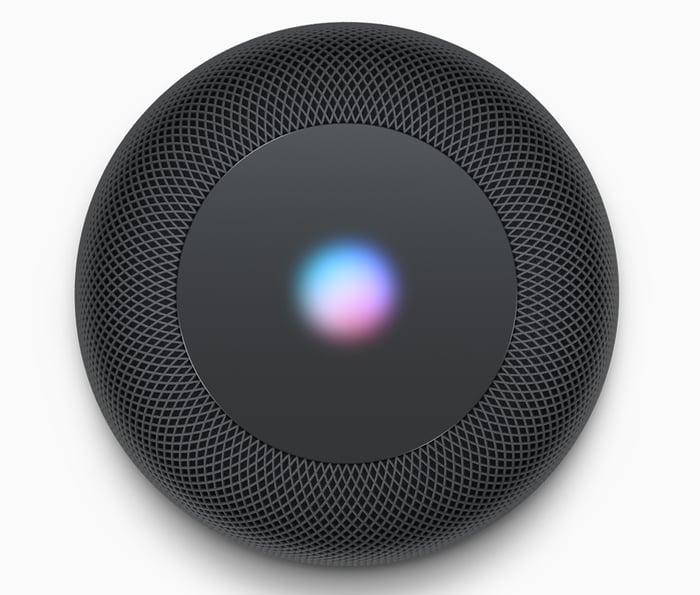 Apple technically opened up Siri to developers last year, but it won't let many third-party developers create apps for the HomePod.

By contrast, Amazon has made Alexa, the assistant at the heart of the Echo line, very open to developers and that approach is paying off. There are already more than 15,000 skills, or apps, available on the company's Echo devices. These skills allow users to do everything from ordering a pizza or an Uber to checking stock prices and buying products through Amazon.com.

Alphabet, while a bit more restrictive than that about letting third-party developers work with Google Assistant, is still closing in on 400 developer apps for Google Home.

Now, Apple's reticence about third-party integration may not seem like a big deal, but it's important to recognize that Amazon has more than 70% of the smart speaker market right now and Google takes a share just under 24%, according to eMarketer.

Essentially, Apple is entering a new market with a device that will be far less capable than its competitors, with only one defining feature setting the $350 device apart: Its sound quality will likely be better than the Echo devices or the standard Google Home. (Google just debuted a $400 Google Home Max that will likely rival the HomePod for sound.)

This isn't just about speaker sales

Let's assume for a moment that Apple's HomePod sales do fall short, and fail to steal significant market share away from Amazon and Google. The HomePod was never destined to be a huge revenue generator for Apple anyway, so why does it matter? Because the Echo is quickly becoming the leader in the connected home space. It's likely that whichever virtual assistant wins in the smart speaker space will also dominate the smart home space as well.

Amazon's latest device upgrades include a new Echo Plus speaker that integrates more easily with other connected home devices and even comes with its own smart light bulb. Google has also opened its Google Assistant up to more integration with connected home devices, and Alphabet's purchase of Nest a few years back means that the company already offers additional smart home hardware.

Apple does allow developers to work with Siri to create apps for controlling third-party devices through its HomeKit platform, but when it launched HomeKit a couple of years ago, it set too many requirements for device makers. As a result, many companies simply stopped trying to make devices that were HomeKit compatible.

Apple has since backed off of some of its stricter hardware requirements, but the damage was already done.

The HomeKit mistep, along with keeping HomePod mostly closed off to developers, could hurt Apple's attempt to win a significant share of the smart speaker market, which is expected to be worth $13 billion by 2024. And missing the smart speaker opportunity -- which is now thoroughly entwined with connected home devices -- could hurt Apple's ability to tap into the $53 billion (by 2022) smart home space as well.

Maybe it's not all doom and gloom for Apple. The company certainly has a way of proving skeptics wrong. But if it wants to be a leader in the connected home, it needs to open the HomePod's door wide to developers very soon.