Please ensure Javascript is enabled for purposes of website accessibility
Log In Help Join The Motley Fool
Free Article Join Over 1 Million Premium Members And Get More In-Depth Stock Guidance and Research
By Daniel B. Kline - Updated Oct 9, 2017 at 6:02PM

Just doing okay seems to be a big positive in this space.

In a market where retail has struggled and a number of chains have closed stores or even gone bankrupt, investors seem willing to reward companies that prove resilient to digital competition.

The furniture space has proven to be one market where the so-called retail apocalypse has not been too disruptive. There are, of course, online furniture players like Wayfair and the omnipresent Amazon, but it seems most consumers still want to touch couches, beds, or other furniture before buying.

In September, four furniture retailers -- Conn's (CONN 0.00%), La-Z-Boy (LZB 3.08%), Haverty Furniture Companies (HVT 2.16%), and Ethan Allen Interiors (ETD 1.63%) -- all posted strong gains in their stock prices. Only one of them, Conn's, reported any major news during the month; the other three rode the momentum of their most recent earnings reports. 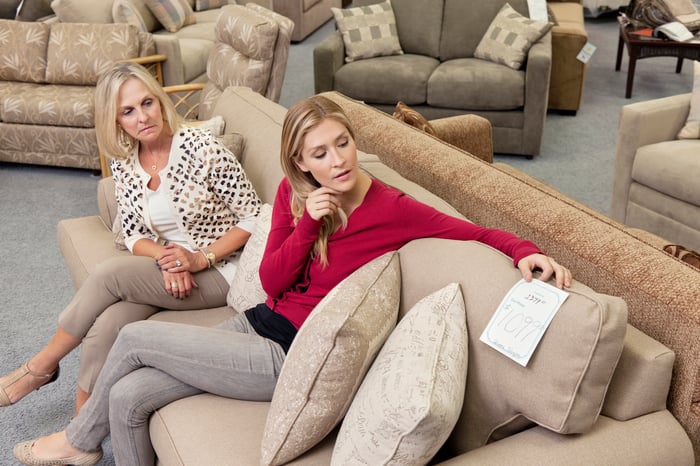 A number of furniture chains saw their stocks do well in September. Image source: Getty Images.

How big were the gains?

Only Conn's reported major news in September. The chain released its second-quarter earnings report on Sept. 7, and while its profit was small at $0.14 per share, making money at all was an achievement.

"I am pleased to announce that Conn's returned to profitability during the second quarter of fiscal year 2018," said CEO Norm Miller in the earnings release. "This achievement is the direct result of Conn's differentiated and highly profitable retail model, the initiatives implemented to turn around our credit business, and the talented and experienced team we have assembled."

Investors clearly loved the turnaround story. After closing August at $17.35, Conn's shares rose to $28.15 at the end of September, a stunning 62% increase, according to data provided by S&P Global Market Intelligence.

None of the other furniture retailers on this list had as impressive a gain, but all rode momentum from their most recent earnings reports. La-Z-Boy saw overall sales increase by 4.8% and same-store sales rise by 0.7% in its first quarter of fiscal 2018. Haverty's saw sales rise by 1.1% while comparable sales were nearly flat at -0.2%. And Ethan Allen actually saw overall sales fall in its fiscal fourth quarter, though it remained profitable; earnings per share came in at $0.42, down from $0.60 in the fourth quarter of 2016.

Ethan Allen, like Conn's, also issued a statement from its CEO, Farooq Kathwari, saying that its turnaround efforts were beginning to pay off:

[F]iscal 2017 was a "year of action" where we completed many initiatives and also launched major new initiatives. As we enter fiscal 2018 we are well positioned to grow with refreshed and relevant product offerings, a strong North American manufacturing, logistics and retail network, investments in technology, increased advertising and expanded marketing channels."

What's very clear here is that investors were looking for anything to be happy about. Conn's turned a slight profit and saw its stock climb dramatically, while Haverty's posted a 12% gain in September, and La-Z Boy climbed by 13% on modest sales increases. Ethan Allen saw its shares gain nearly 11% with negative results, but strong optimism from its CEO.

These gains are tenuous

For all four of these chains, investors are rewarding decent, but not great, performance. That leaves all of these retailers vulnerable: A slight downturn could create the impression that their businesses have faltered.

Furniture chains appear internet-resilient, but that's not a definite, and it's certainly not a permanent immunity. These are encouraging numbers, but these companies will have to post a series of strong quarters to re-instill real confidence in the space.