Wynn Resorts is building growth projects in the U.S. and Macau that will drive a decade of growth.

Most of the major gaming companies trading in the U.S. have been in expansion mode for most of the last two decades. MGM Resorts (MGM 3.63%), Las Vegas Sands (LVS 5.03%), and Caesars Entertainment (CZR) have been building or acquiring projects in Las Vegas and Asia, creating the behemoth companies we know today. But growth opportunities are few and far between right now, whether because of market saturation (Las Vegas) or limits on how many casinos the government will let a company build (Macau, Singapore).

One company that has a lot of growth ahead is Wynn Resorts (WYNN 2.11%). The company has quietly been adding growth projects in the U.S. and Macau, and over the next five years, I think it will grow more organically than any of its major competitors. 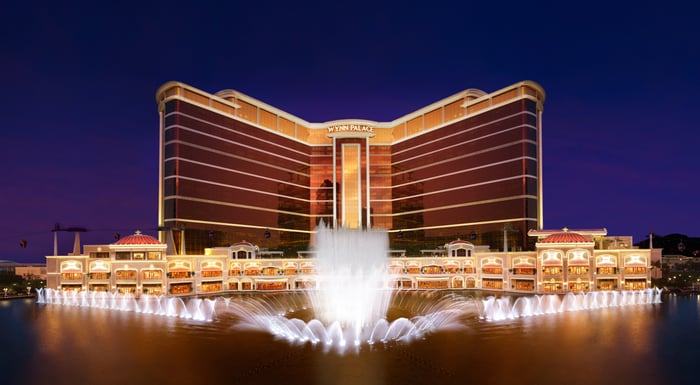 The expansion phase at Wynn Resorts

For most of the past decade, Wynn Resorts has been two resorts: Wynn Las Vegas and Wynn Macau. Last summer, the company opened Wynn Palace, a $4 billion resort in the Cotai region of Macau. In time, the property will likely be Wynn's biggest cash generator, potentially earning $1 billion in EBITDA annually.

Wynn Boston Harbor will be the company's fourth resort, under construction near downtown Boston. The $2.4 billion project is expected to open in mid-2019, opening a new market to Wynn. We don't know yet what kind of returns this project will generate, but MGM Resorts' National Harbor project is on pace to generate $700 million in revenue and $140 million in EBITDA in its first calendar year of operation. Given the location of Wynn Boston Harbor and the company's high-end clientele, I think it's safe to say Wynn will generate more in revenue and EBITDA than National Harbor.

The other big project Wynn has been discussing is the development of the golf course behind Wynn Las Vegas. Wynn is planning to develop a 450,000-square-foot addition that includes mostly convention space and a 28-acre lagoon in the middle of the desert. In the past, Wynn has even talked about a $25 fee to enter the development, which could be worth hundreds of millions in revenue each year. Whatever the final plans look like, Wynn hopes to break ground late this year or early next, putting another major development on the company's horizon.

In the last year, Wynn has generated $5.4 billion in revenue and $1.5 billion in EBITDA. When Wynn Palace is running at full steam, Wynn Boston Harbor is open, and Paradise Park opens they will drive significant growth, potentially enough to double the company's size.

Is more growth ahead?

Two more growth projects could be in the near future if Wynn gets approval to build them. The most likely is an expansion of Wynn Palace, which would include another hotel tower and more entertainment, shopping, and restaurant venues. It's not clear when that expansion could be built, but if Wynn Palace is anywhere near the success Wynn hopes it will be, we can bet he'll be pushing to expand in the near future.

Another potential expansion is in Japan, a license every major gaming company is hoping to win when bidding opens up. This is more of a long shot given the uncertainty in that country's gaming plans today, but this could be a top-three gaming market from the day it opens, and companies are clamoring to invest as much as $10 billion into a project there. And Wynn will certainly be a bidder.

Given the limited number of growth opportunities in gaming today, I think Wynn Resorts is easily the best growth stock. Revenue could double in the next five years as it opens these new developments, and if it wins the license in Japan, growth could be much higher than that. For a company that's already one of the biggest gaming operators in the world, that's a lot of growth to look forward to -- and it could lead to a great investment for shareholders as well.