If any company should be at the forefront of 21st-century agriculture, it's machinery giant Deere & Company (NYSE:DE). Staying true to its roots as a manufacturer of farm equipment, last month the company paid $305 million to acquire privately held Blue River Technology, a privately held California company that makes high-tech crop-spraying equipment.

Even for a Deere-sized enterprise, $305 million is a lot of green. Let's unpack the deal and see if it was worth the money.

California-based Blue River Technology was founded in 2011, with its stated goal "to make farming more sustainable through robotics and computer vision."

It has two products, both of which are basically big, high-tech devices that hook onto a tractor. The first is LettuceBot, which assists with the arduous process of lettuce thinning (removing inferior leaves to promote the growth of healthier ones). The second is See & Spray, a system that precision-spritzes pesticide onto weeds without affecting nearby crops. Both have machine-learning capability. 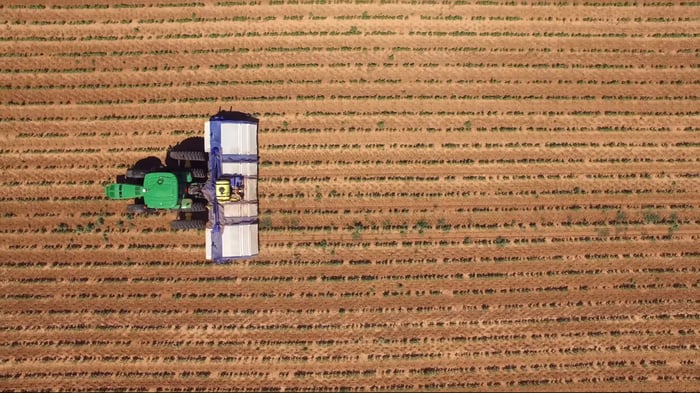 The benefits of this technology are obvious -- it automates processes that have been done by hand for years, saving on labor costs. And it eliminates waste in materials that can be pricey. According to Blue River Technology's estimates, on a global basis annual spending on pesticides is roughly $50 billion. The company says See & Spray utilizes up to 90% less herbicide (a category of pesticide) than traditional methods.

That potential is very appealing, but it doesn't seem to be the key attraction for Deere. The company strongly hinted that it was more interested in the technology underpinning the two products. In its press release heralding the deal, CIO John May said that "[m]achine learning is an important capability for Deere's future."

Since both machine learning and assisted and autonomous operation are at the edge of current vehicle technology, expertise in them is hard to come by, even for large and wealthy companies. That's why it's become the norm for automakers and tech-solutions providers to buy that knowledge rather than work it up in-house.

Just ask computer-chip giant Intel (NASDAQ:INTC), which this summer closed its deal for autonomous-systems specialist Mobileye. Or master of the transportation-sharing economy Uber: In 2016 it acquired Otto, a company that focuses on developing cutting-edge assisted and autonomous driving solutions for trucks.

Not to be outdone, earlier this year Ford (NYSE:F) bought a majority stake in Argo AI, an early-stage robotics and artificial intelligence company, in order to bolster its efforts in the autonomous sphere.

None of these deals came cheap. Intel spent over $15 billion to put Mobileye in its portfolio. Ford's Argo AI investment will ultimately total $1 billion. Uber got a relative bargain with the Otto deal, but it was still pricey at around $680 million. Anyone who wants to play in the autonomous and machine-learning games has to pay, and dearly.

Does the deal make sense?

Deere and Blue River agreed to their arrangement in September, and it closed in the same month. Deere said it intends to keep its new asset headquartered in California's Silicon Valley, specifically Sunnyvale. The deal was not subject to regulatory or shareholder approval.

Blue River's current technology is harnessed only to a pair of very specialized agricultural functions, so it makes sense that it costs less than Intel, Ford, and Uber paid in their recent deals. But the brains of Blue River's machines can theoretically be modified by Deere's best and brightest in order to help automate the company's many other vehicles -- and perhaps even pioneer new types of functionality.

Of course, the ultimate impact of Deere's latest acquisition will depend on how quickly and effectively the company can accomplish at least some of this. We'll see how that goes. But what Blue River has is full of potential, and dovetails nicely with its new owner's core strength and expertise. Looked at from that angle, it's a pretty good deal, despite the nine-figure price tag.