A creepy clown helped put the movie tech company back in the market's good graces.

Shares of IMAX (IMAX -1.19%) surged more than 25% last month, according to data provided by S&P Global Market Intelligence. The entertainment technology company received a boost from a surprisingly popular horror flick that boosted attendance at theatres across the country.

After a brutal start to the year as its stock price plunged as much as 40% by mid-August, IMAX's shares rebounded off their lows after It -- a silver screen adaptation of Stephen King's novel -- crushed opening weekend records for horror films and movies debuting in September. That's particularly good news for an industry that had just suffered its worst Labor Day holiday sales since the year 2000, and helped to quell fears that ticket sales were falling off a cliff. 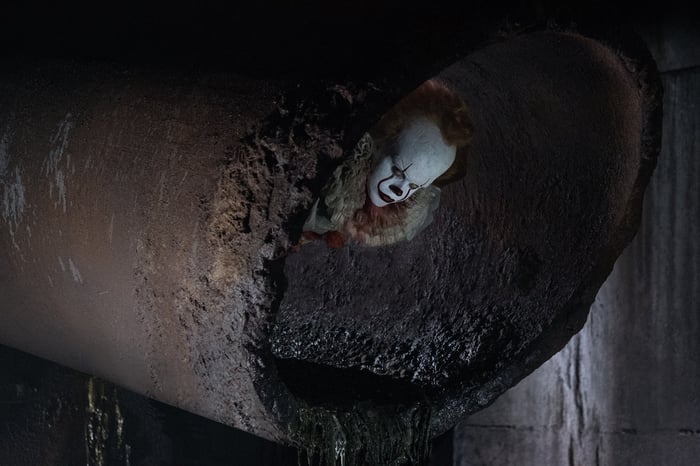 The movie theatre industry has been at the losing end of the growth of online streaming video. As the stay-at-home trend continues to gain steam, movie theatre attendance and profits are likely to remain under pressure.

To remain relevant in this changing consumer environment, IMAX is investing in virtual reality technology and forging valuable partnerships with other innovative tech leaders. That's vital, because IMAX -- and the movie theatre industry as a whole -- will need to do all it can to create a distinctive movie-watching experience if it hopes to lure people away from an increasingly seductive array of stay-at-home options. And while it's too early to tell who will win this war, one thing is certain: the battle for movie-watchers' attention is about to intensify.