Based on yield, payout ratio, and dividend growth, this bank stock would make a solid addition to any income-investor's portfolio.

One of the appeals of bank stocks is that they tend to pay generous and growing dividends. You could even say that it's an inherent aspect of a bank's business model, since most banks can't responsibly reinvest all of their earnings each year.

While banks, as a whole, tend to pay out a larger share of their earnings than other types of companies, not all bank dividend stocks are created equal. There are three variables, in particular, that investors should assess.

Take JPMorgan Chase (JPM 2.02%), as an example. If you wanted to know if it's the best big-bank dividend stock, the first thing you would want to check is its dividend yield. This is calculated by dividing a bank's dividend per share by its share price. The higher the yield, the larger the quarterly distribution relative to the price of the stock.

In terms of being among the best big-bank dividend stocks, this weighs in JPMorgan Chase's favor.

The second variable that dividend investors should analyze before buying a particular bank stock is the dividend payout ratio, which offers a hint about how much and how quickly a bank might be able to raise its dividend in the future. The payout ratio is calculated in a similar way to the dividend yield. It's the quotient of a bank's dividend per share over its earnings per share.

As a general rule, the typical bank will pay out a third of its earnings by way of dividends. This equates to a payout ratio of 33%. The remaining two-thirds is then split between share buybacks and retained earnings. The payout ratio is especially important for large banks because the Federal Reserve had threatened to closely scrutinize banks with more than $50 billion in assets that distribute more than a third of their earnings via dividends, and effectively caps banks that size from paying out more than 40% of earnings. In JPMorgan Chase's case, its payout ratio over the past 12 months has been right at 33%. That's right in line with the general rule, and slightly below the 34% average among the two dozen stocks on the KBW Bank Index.

The nation's biggest bank by assets accordingly has an edge with respect to this variable, as well, as the lower the payout ratio, the greater the growth potential for future quarterly distributions.

The final variable that should be taken into consideration when hunting for the best big-bank dividend stock is the growth rate of a bank's quarterly dividend per share. Ideally, you want to buy into a bank that has a growing payout.

As a general rule, most banks will increase their dividend by a mid- to high-single-digit percentage each year. But there have been multiple notable exceptions to this rule over the past few years -- namely, Bank of America (BAC 1.64%) and Citigroup (C 1.90%). 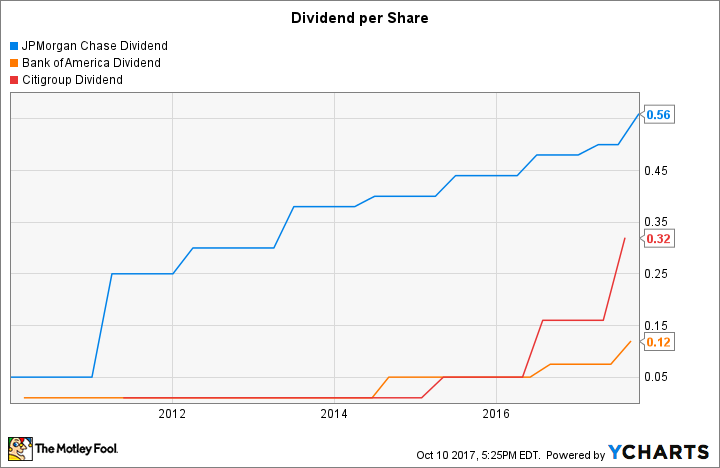 Bank of America and Citigroup both ran into serious problems during the financial crisis, causing them to slash their dividends to $0.01 per share. Since then, they've each raised their dividends three times, roughly every other year, on average. They've been reluctant to do so annually out of fear that the Fed would veto the move, as it's done with both Bank of America and Citigroup in the past.

When it comes to JPMorgan Chase, however, the New York-based bank has carved out a clear history of raising its dividend annually since the financial crisis. This doesn't guarantee that the bank will continue doing so in the future, but it does bode well for the prospect.

This third variable thus similarly weighs in favor of JPMorgan Chase's strength as one of the best big-bank dividend stocks in the market today.

In sum, on all three variables that matter most to dividend investors, JPMorgan Chase proves to be a solid addition to any income-investor's portfolio.