Please ensure Javascript is enabled for purposes of website accessibility
Log In Help Join The Motley Fool
Free Article Join Over 1 Million Premium Members And Get More In-Depth Stock Guidance and Research
By Keith Noonan - Oct 10, 2017 at 6:19AM

Do sell-offs point to a buying opportunity in this Chinese social media company?

Momo Inc. (MOMO 4.95%) stock lost 18.7% of its value in September, according to data from S&P Global Market Intelligence. The Chinese social media company's seemingly impressive earnings release in August was followed by sell-offs that carried through to September as investors weighed slowing growth against the stock's premium valuation.

The chart below tracks Momo stock's performance over the last three months. 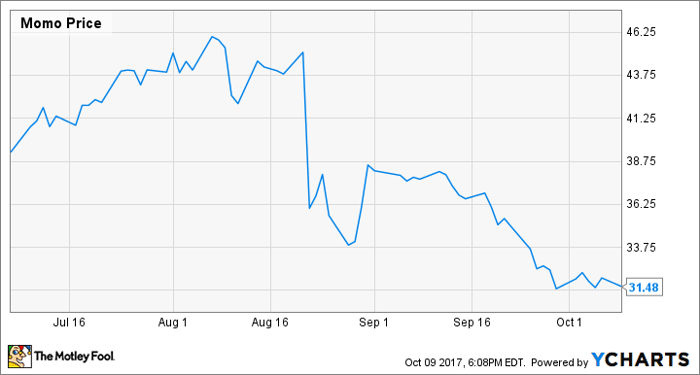 Hosting and serving videos is cost intensive, so indications that Momo is having trouble expanding its paying user base, along with comments from management that overall engagement was roughly flat, could signal a substantial growth slowdown in the near future. The company's operating expenses have already grown faster than sales in its last two quarters, further complicating the picture.

On the other hand, paid subscriptions are not the company's only, or most important, revenue stream. Even without paid-user growth, the company's average revenue per monthly active user increased nearly 160% year over year last quarter.

Momo shares trade at roughly 19 times forward earnings estimates. Given the company's impressive growth, that's a valuation that could point to a buying opportunity for investors who are willing weather potential volatility with the stock. Looking at another metric, the company's forward price-to-earnings-growth ratio is roughly 0.15 -- another indicator that suggests the stock could be a good buy at current prices.