The bank’s earnings should rise, though not as quickly as investors may have hoped.

Earnings season is upon us, with all four of the nation's biggest banks set to report third-quarter results this week. JPMorgan Chase (JPM -1.75%) and Citigroup (C -2.19%) will kick things off on Thursday, followed by Bank of America (BAC -2.23%) and Wells Fargo (WFC -0.97%) on Friday.

Here's what to expect from Bank of America's performance in the three months ended Sept. 30, 2017. 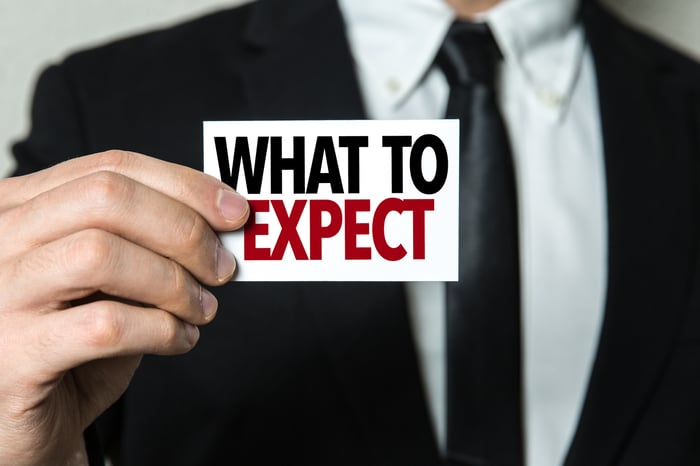 Generally speaking, Bank of America's earnings are expected to rise. In the third quarter of last year, the nation's second-biggest bank by assets earned $0.41 per share. The consensus estimate for the just completed quarter, by contrast, pegs the bank's earnings per share at $0.46, which would translate into a 12% increase.

Anytime earnings grow by a double-digit percentage, it's obviously a positive sign. However, over the past few weeks, analysts have nevertheless begun to temper their expectations for Bank of America's performance in the third quarter.

Analysts at Keefe, Bruyette & Woods, for instance, recently dropped their estimate for Bank of America's third-quarter earnings from $0.49 per share down to $0.47 per share, which is still slightly above the consensus estimate. 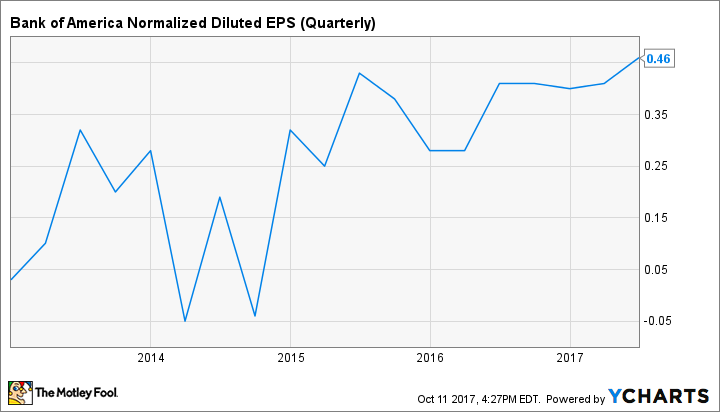 It's worth keeping in mind that trading revenues at banks are notoriously volatile, so the drop shouldn't set off investors' alarms. On top of this, while Bank of America generates a considerable $3.2 billion in revenue from trading each quarter, that nevertheless equates to only 16% or so of the bank's top line.

The second reason cited by KBW for lowering big bank earnings estimates was that it expects loan growth to continue to decelerate in the quarter. Given that loans are the principal product most banks sell, this trend would be felt on banks' top lines.

Analysts expect loan growth at big banks to have dropped last quarter for the fourth time in a row, coming in at only 1.8% compared to more than 6% for most of 2016. It's widely believed that the uncertainty in the economy right now around tax cuts and regulatory relief in particular has caused businesses to delay making investments until there's more clarity around these issues. Finally, while the Federal Reserve increased the Fed funds rate at the end of the second quarter, the interest rate environment continues to present a challenge for banks, which make more money when interest rates are high. Long-term rates have been particularly disappointing, trending downward for most of the quarter until only recently.

In Bank of America's case, the Charlotte, North Carolina-based bank says that a 100-basis-point increase in short- and long-term rates should produce an added $3.2 billion worth of net interest income. That's auspicious, but there's no telling when rates will actually climb that much.

In sum, investors in Bank of America can expect the bank to continue heading in the right direction. Its earnings per share should rise, though not as quickly as many analysts and investors had previously hoped.