Giant auto industry supplier Magna International (NYSE:MGA) has stepped into the self-driving fray. Magna said that it has signed on to an existing partnership led by BMW AG (OTC:BAMXF), Intel (NASDAQ:INTC), and Intel subsidiary Mobileye that aims to develop a self-driving vehicle "platform" by 2021.

What Magna and BMW said about the deal

Magna, a longtime BMW supplier, said that it is joining the BMW-Intel-Mobileye partnership as a "Tier 1 technology integrator" that will help automakers "industrialize and customize" the self-driving control system developed by the partnership.

Many of the autonomy challenges the industry is facing can't be handled in isolation. I am confident that the many strengths brought forward by each partner will contribute to the delivery of a self-driving platform the market can leverage. We are extremely excited to be one of the early integrators bringing our unique capabilities to the platform.

To sum up: Magna is going to help the partners bring their new system to market. 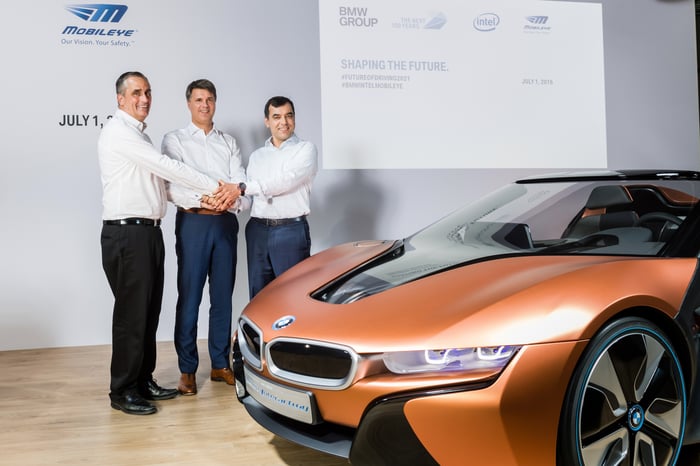 What is this partnership?

Back in July 2016, BMW, Intel, and Mobileye announced a technology partnership that would aim to bring a fully autonomous vehicle platform to market by 2021. The goal, the partners said at the time, would be to develop a system that would allow for varying levels of automation, from a partial "Level 3" system to a full-blown "Level 5" system that can do anything a human driver could. (Learn more about the "levels" of self-driving technology here.)

Other companies have since joined the effort. Delphi Automotive (NYSE:DLPH), which last year announced a separate effort to develop a Level 4 system with Intel and Mobileye by 2019, joined the BMW partnership in May. Fiat Chrysler Automobiles (NYSE:FCAU), which isn't known to have a self-driving development effort of its own, signed on in August.

And now Magna has joined the effort.

What it means for Magna

Assuming that the development effort is successful, it means that in about four years, Magna will have a ready-to-go self-driving system available to offer to its automaker customers.

BMW, Intel, and Mobileye have said that their system will target fleet customers, at least at first, most likely those engaging in car-sharing, ride-hailing, or (possibly) cargo delivery services. Many analysts see urban ride-hailing services as the likely first adopters of self-driving vehicle technology on a large scale.

It's not likely that Magna will build its own self-driving vehicle, though it does have some limited vehicle manufacturing capacity of its own. More likely, Magna sees this as a way to work with automakers around the world that may be interested in supplying fleet customers with self-driving vehicles.

The upshot: Magna is now a self-driving player

Magna has done some work around autonomous vehicle technology and might have been able to develop its own system, in time. It may still pursue that research, but this deal will give it a credible system to offer to its clients in 2021, which is likely a few years sooner that it could have achieved on its own.

Long story short: This deal ensures that when self-driving vehicles start to hit the market in a few years, Magna will have a piece of that business.