Crude oil rebounded this week after taking a quick breather. For the week, the price of the U.S. oil benchmark WTI was up 4.4%, closing at around $51.50 a barrel. One of the catalysts driving crude higher were comments by President Trump that he refused to certify Iran's compliance with an agreement to cease working on its nuclear program in exchange for relief on economic sanctions. Because that deal allowed the country to resume oil exports, they could be in jeopardy if Trump calls for new sanctions.

But despite the rise in oil prices, oil stocks were mostly quiet this week. In fact, according to data from S&P Global Market Intelligence, most of this week's biggest movers were to the downside. 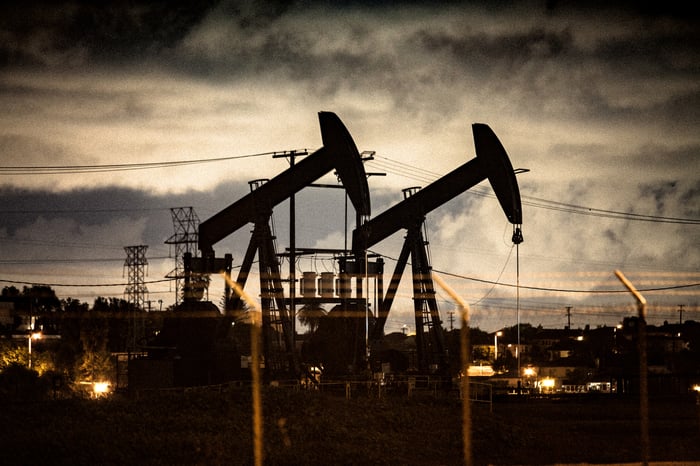 Tthere was one notable exception: Shares of Helix Energy Solutions (NYSE:HLX) rocketed more than 18% this week after The Wall Street Journal reported that the offshore services company was "exploring strategic alternatives." The report said Helix has already hired bankers who are working on a potential sale. However, it just recently began the process, which might not lead to a transaction -- although investors certainly seem optimistic that Helix Energy Solutions would find a buyer, given the stock's reaction to the news. Driving that view is that by merging with Helix, a rival would increase its scale and have the opportunity to capture cost synergies that could boost profitability

Heading in the opposite direction was EP Energy (NYSE:EPE). Shares of the driller dove almost 12% this week, after the company provided an operational update following Hurricane Harvey. EP Energy noted that none of its facilities sustained any damage from the storm and that it was able to continue drilling. The only impact was a short-term reduction in sales volumes because of some issues with downstream infrastructure, which will result in the loss of about 900 barrels of oil equivalent production per day during the third quarter, though the company reaffirmed guidance for the quarter and full year. Apparently, investors reacted to the slight impact on EP Energy's production from the storm as increasing the likelihood that output would be toward the lower end of guidance, rather than the fact that the company would still be within its forecast range.

Shares of Apache (NASDAQ:APA) also slumped this week, falling by double digits at one point before closing 8% lower. Fueling the sell-off was the revelation that Apache will outspend cash flow by $1 billion this year, with another large gap projected for 2018. The company had initially said it wanted to try to live within cash flow but would supplement that with non-core asset sales because it needed oil to average $50 this year and $55 next year -- and that has proved to be optimistic. In addition to that budget-busting revelation, the company reduced its production guidance for the second half of the year because of the impacts from Hurricane Harvey as well as some issues in its international operations. These issues didn't sit well with investors, who want to see the company turn its Alpine High discovery into a growth engine at current oil prices. However, that's difficult to do right now, because it needs to invest heavily in building the midstream infrastructure to support the development.

The most noteworthy move this week was Apache, which got thumped because of some temporary setbacks. Even so, the company appears to be sitting on a treasure trove of oil and gas in its Alpine High play, which is proving to be a game-changer for the company. This week's sell-off therefore looks as if it could be an excellent time for investors to take a closer look at Apache.