The chipmaker faces a huge fine in its third largest market.

Qualcomm (QCOM 3.14%) was recently hit with a NT $23.4 billion ($774 million) fine by the Taiwanese Fair Trade Commission (FTC), which claims that the chipmaker unfairly manipulated prices and intentionally hampered its competition. This represents the commission's highest ever fine since its inception in 1992, and marks a big setback for the company in Taiwan, its third largest market after China and South Korea.

The FTC claims that Qualcomm holds a monopoly over the chip market with its baseband technologies; it either refused to license that tech to rival chipmakers or charged them unfavorable licensing fees. The commission is ordering Qualcomm to terminate its unfavorable contracts with competitors, along with exclusionary deals with OEMs that include rebates or discounts. 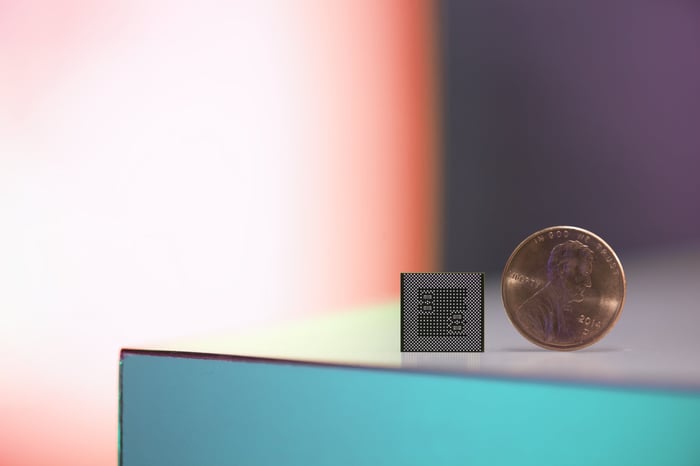 Qualcomm claims that the fine "bears no rational relationship to the amount of Qualcomm's revenues or activities in Taiwan," and that it "will appeal the amount of the fine and the method used to calculate it." Last year, 12% of Qualcomm's revenues, or $2.8 billion, came from Taiwan. The commission claims that Qualcomm has been violating antitrust laws for "at least" seven years.

Another day, another headache for Qualcomm

Together, revenues from China, South Korea, and Taiwan accounted for 86% of Qualcomm's top line last year. Qualcomm has now been fined by regulators in all three countries over similar charges about its patent licensing practices.

In 2015, Qualcomm agreed to pay a $975 million fine in China over antitrust violations, and lowered its licensing fees for Chinese OEMs. Last year, the South Korean FTC fined Qualcomm 1.03 billion won ($910 million) over similar charges. The chipmaker continues to appeal that fine. Including the new Taiwanese fine, Qualcomm has been fined nearly $2.7 billion across its top markets in just two years, which is equivalent to nearly 12% of its projected revenues for the current year.

Unfortunately, the fines probably haven't ended yet. Qualcomm still faces ongoing antitrust probes in the US and Europe.

Qualcomm also faces a growing revolt among OEMs, many of which argued that the chipmaker's cut (up to 5%) of the wholesale price of every smartphone sold worldwide was too high. The most vocal critic is Apple (AAPL 2.62%), which suspended all royalty payments to Qualcomm earlier this year. That bold move inspired a second major OEM (most likely Huawei) to halt its payments as well. Those developments prompted Qualcomm's lawyer to dramatically declare that the company's "house is on fire" during a court hearing in August.

If the "house is on fire," shouldn't investors get out?

All these government probes and lawsuits target Qualcomm's licensing business, which generates the lion's share of its pre-tax profits. In previous years, that high-margin business supported its lower-margin chipmaking business, which was more vulnerable to the cyclical demand of mobile devices.

Analysts expect the ongoing pressure on its licensing business to cause its earnings to fall 6% this year and another 18% next year. If more governments fine Qualcomm and OEMs follow Apple's lead and suspend their royalty payments, those bleak estimates could still be too optimistic. That bottom decline could eventually cripple its dividend, since its payout ratio soared as its earnings fell: 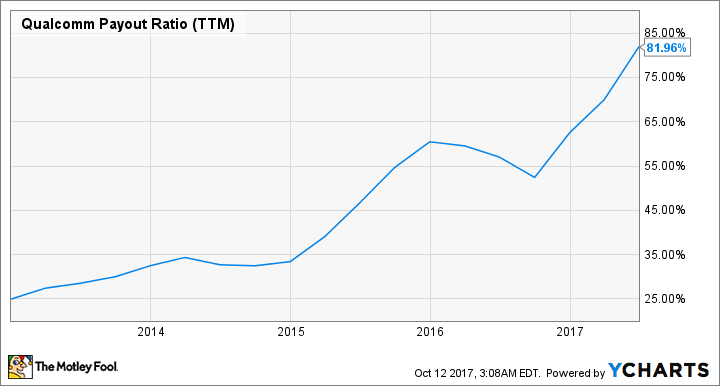 Therefore, two common reasons for buying Qualcomm -- its "low" forward P/E of 16 and its high forward yield of 4.4% -- aren't compelling if its earnings keep falling and its payout ratio keeps rising. The constant stream of probes and fines could also endanger Qualcomm's planned takeover of NXP Semiconductors (NXPI 5.22%), which still hasn't been approved by NXP's shareholders or the European Commission.

If Qualcomm can't seal the NXP deal, it can't diversify its chipmaking and licensing businesses away from mobile devices -- which means that the ongoing war against its licensing business could cripple its long-term growth.

It's hard to see Qualcomm winning its appeals in South Korea and Taiwan. It will likely need to pay those fines, agree to the terms set by the commissions, and reduce its licensing fees. Until it does that and offers investors a clearer picture of its future, I'd steer clear of this besieged chipmaker.