Here's a quick look at why these stories matter. 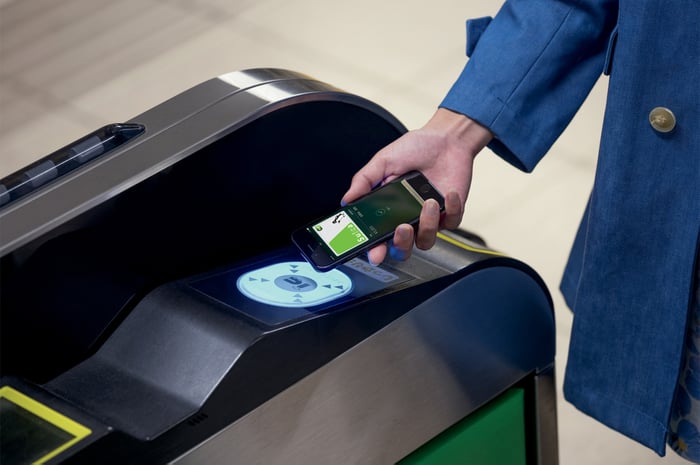 "According to Forrester, by 2021, mobile payments volume in the U.S. will triple," said Wells Fargo's (NYSE:WFC) lead of virtual channels, Jim Smith, last week. "Our customers are increasingly using mobile to manage their finances and make payments, which makes it ever important for Wells Fargo to provide our more than 20 million mobile banking and mobile wallet customers with a seamless mobile authentication and access experience at our ATMs, online, and in our branches."

To this end, Wells Fargo announced it is rolling out near-field communication (NFC) functionality at 5,000 of its ATMs across the U.S. By 2019, the company plans for all of its 13,000 ATMs to support the technology. The technology will work with Apple Pay, Android Pay, and other major mobile wallets.

The move is a major endorsement for Apple Pay, the world's leading NFC-based payment technology. Already accounting for 90% of NFC transactions on mobile, this will help increase Apple Pay's rapid adoption globally.

Ahead of its third-quarter earnings report this week, and following an analyst upgrade on the stock, PayPal stock climbed 4% last week. The stock's gain during the week brings PayPal stock's total year-to-date return to an incredible 74%.

PayPal's soaring stock price brought the mobile-payments company's market capitalization to about $82.6 billion by the end of the week, notably ahead of credit card company American Express' $81.1 billion market cap. The milestone highlights the success of mobile payments and the Street's increasing bullishness on fast-growing financial technology platforms. 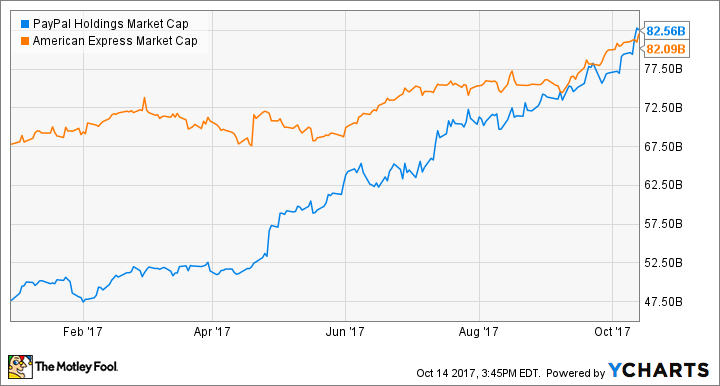 In PayPal's most recent quarter, the company reported an 18% and 27% year-over-year rise in revenue and earnings per share, respectively. Investors will be looking for strong growth to persist when the company reports earnings on Thursday.

Facebook closed out the week with a surprising announcement that it's rolling out the ability to order food for takeout or delivery on iOS, Android, and desktop across all of the United States. Facebook said that by offering this as a feature within Facebook, the company is taking the next logical step after enabling users to read reviews of nearby restaurants and to see what their friends are saying about them.

Facebook is approaching food delivery with a partnership strategy instead of trying to reinvent the wheel. The company will use existing food-ordering services, including EatStreet, Delivery.com, Door, and Dash.

The service builds on the company's efforts to make Facebook much more than a place to communicate, but also a place to connect with businesses and make transactions.

Check back at the end of the week for more updates on the top tech stories.