These facts may surprise you.

Apple (AAPL 1.62%) is beloved by many, despised by some, and respected by most. The company has become an icon of American capitalism, technological innovation, and shareholder wealth creation.

Yet despite the fact that more than 30 investment firms cover the stock's every move -- and millions of investors around the world follow the company every day -- there are some aspects of Apple's history of which many people are not aware.

Here are five interesting things about Apple you may not yet know. 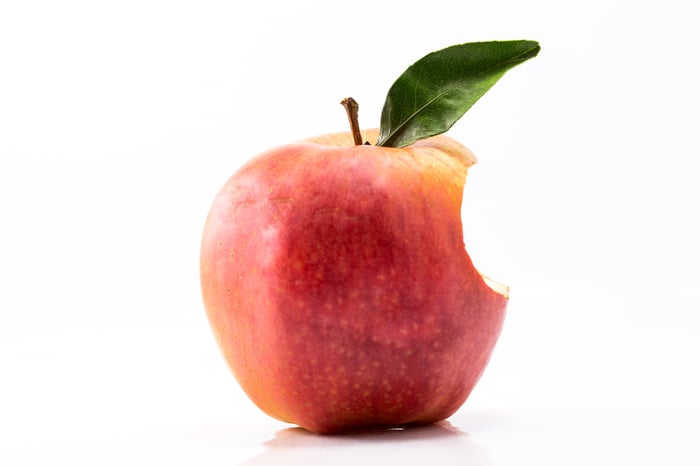 Steve Jobs chose the name Apple Computer for a few reasons. He was on a fruitarian diet at the time and thought the name would make computers sound less intimidating and more fun. Additionally, he wanted Apple's name to be ahead of Atari -- the game company at which Jobs previously worked -- in the phone book.

2. Steve Jobs and Steve Wozniak were not Apple's only founders

Ronald Wayne was the third co-founder, and he has the unfortunate distinction of selling his 10% share of the company back in 1976 for only $800. It's unclear as to whether Wayne's stake would have subsequently been diluted if he'd held onto it, but 10% of Apple would be worth more than $80 billion today. Perhaps most surprisingly, Wayne claims he has no regrets about selling his Apple stake.

In early 1996, Apple was almost bought by Sun Microsystems, the computer systems and software maker that designed Java. Sun's former president, Ed Zander, later said the companies were "literally hours away" from completing a deal. However, the deal fell apart. Apple would go on to buy Steve Jobs' NeXT Software within the next year, and it was Sun that was later acquired by Oracle in 2010.

Microsoft (MSFT 1.07%) invested $150 million in Apple in August 1997 shortly after Jobs' return. The two companies signed a patent cross-licensing agreement, Microsoft promised to support Microsoft Office for the Mac, and Apple agreed to make Internet Explorer the default web browser on its computers. Most importantly, Apple received the cash it needed to avoid bankruptcy.

Microsoft would go on to earn a tidy profit on the Apple shares it received as part of the agreement. But it was Apple that ultimately benefited most from the deal: It became the world's most valuable technology company when its market cap exceeded that of Microsoft's in 2010.

5. It's incredible how much things have changed for Apple in the past two decades

In October 1997, just months after Steve Jobs had rejoined Apple, Michael Dell of rival computer company Dell said that if he were running Apple, he would "shut it down and give the money back to the shareholders."

Twenty years later, Apple is now the most valuable company in the world, with a market capitalization of more than $800 billion. Incredibly, even more good times likely lie ahead for Apple and its shareholders.