Please ensure Javascript is enabled for purposes of website accessibility
Log In Help Join The Motley Fool
Free Article Join Over 1 Million Premium Members And Get More In-Depth Stock Guidance and Research
By Eric Volkman - Oct 18, 2017 at 6:32AM

It's a great time to be in the card payment business. Out of the famous trio, here's which card stock is the best investment.

Over that time, many an investor has pondered which of the Big Three is the best stock buy for the money. Here's which one I think is the champ right now. 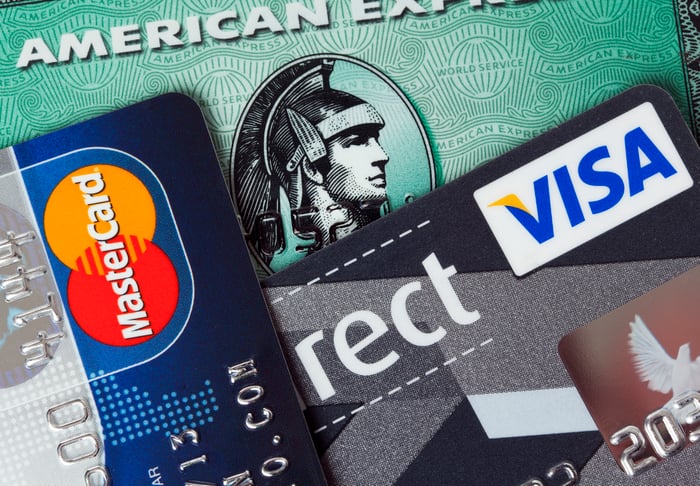 First, let's take a top-down look at the payment-card industry. There are two types of operators -- open-loop and closed-loop. In the first, the card company is merely the facilitator of transactions; another company extends the credit, typically a bank or other sort of financial institution. Visa and Mastercard both fall under this category; they are card brands but provide no credit themselves.

Closed-loop companies generally function as both the creditor and the payment processor; this is the case with AmEx and smaller peer Discover Financial Services.

The game with open-loop companies, since they're essentially middlemen taking a cut of every transaction on their network, is volume. The more payments effected with their brands, the more money they make, all things being equal. Credit risk is someone else's problem.

Yet it's also someone else's opportunity, at least as far as AmEx is concerned. As a closed-loop operator, it also pockets those per-transaction "swipe" fees, but unlike Visa and Mastercard, it rakes in interest income from the credit it extends to its cardholders as well as annual membership fees from those customers.

This is why AmEx's revenue is well higher than that of both Visa and Mastercard. However, since AmEx's costs of being a money lending, one-stop shop are proportionally much higher, its margins are significantly thinner. 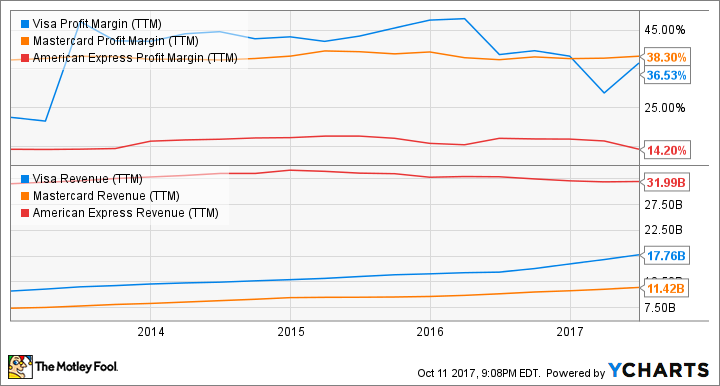 It also has a smaller footprint -- at the end of last year there were around 47.5 million AmEx cards in circulation, according to data from WalletHub. That number is well under Mastercard's estimated 200 million, and Visa's 335 million (again, volume is key for the open-loopers).

The world is quickly moving away from cash to alternatives such as plastic and digital. According to Euromonitor International, transactions made by card overtook those by cash for the first time last year.

One forecast from the Nilson Report predicts that the number of payment cards in circulation will rise by 16% from the end of 2015 to 2020 -- a trend that favors the volume guys, rather than closed-loop operators, since they necessarily have to be more careful and cautious about issuing cards.

Meanwhile, Mastercard and Visa have gotten more deeply involved in 21st-century payment processing. Visa in particular has done a good job inserting itself into this segment, forming a partnership with one-time antagonist PayPal Holdings, and another with Europe-based online payments specialist Klarna.

Analysts have a rosy view of the future of both open-loopers. According to Zacks Investment Research, prognosticators have collectively forecast earnings growth averaging 16.3% annually over the next five years for Visa, and 15.5% for Mastercard. AmEx's figure for same is a good-but-not-quite-there 10.3%.

All of this means that, for me, the ultimate choice for investors is between Visa and Mastercard -- even though I have long been an AmEx bull and remain so.

So which of the pair takes the crown? In my view, it's Visa, which is giving every indication that it's well armed and very ready to expand its lead in the payment-card space. The company's recent results have been nothing short of stellar, and those smart strategic partnerships, plus the recent consolidation of Visa Europe into its business, position it very nicely for the future.

Both Visa and Mastercard have, justifiably, seen run-ups in their stock over the past few months as investors realize just how explosive their potential is. These days, Visa trades at a very high trailing 12-month P/E of over 40, while Mastercard floats a bit north of 36. Looking toward the future, though, the two stocks' P/E-to-growth rates are roughly equal at around the 1.9 level.

For the aforementioned reasons, I think the bigger company has scope for bigger share-price gains. If anything, analysts are underestimating Visa's potential. It's the clear winning stock for me at the moment.