China has been a critical component of Ford Motor Company's (NYSE:F) growth story following the past recession, and it will hopefully become a second pillar of revenue strength next to North America. Detroit's second-largest automaker has done quite well increasing its sales annually in the world's largest automotive market, but one thing is clear: Some of the low-hanging fruit is gone, and management sees the need to adapt its strategy. Let's dig into Ford's September sales result in China and what management plans to do going forward.

One bright spot was found in Ford's luxury Lincoln portfolio. Despite accounting for a small percentage of Ford's total sales, Lincoln continues to grow rapidly in China. Last month, Lincoln sales jumped 79% to more than 5,700 vehicles, and that trend held true for the third quarter, which recorded almost 16,000 units for 83% growth, compared to the prior year. 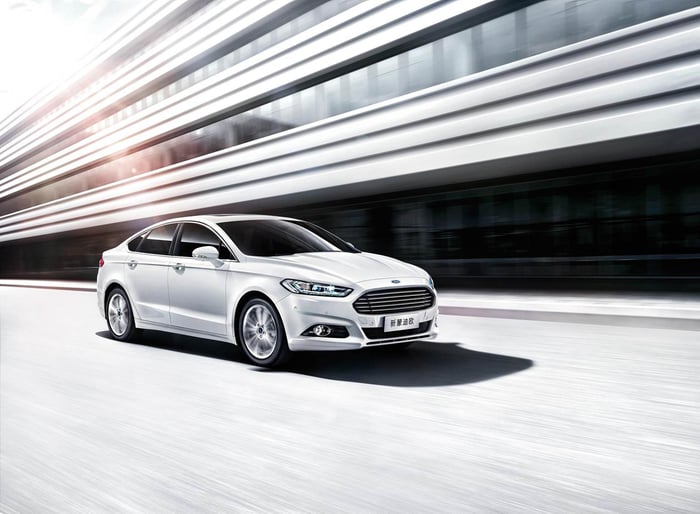 In addition to Lincoln, other highlights sprinkled Ford's September data in China. Mondeo (Fusion) sales jumped 19% in September and notched almost 29,000 units sold during the third quarter -- great news as many sedans have recorded weaker sales globally this year. Ford's Kuga (Escape) continues to rebound and recorded a healthy 42% spike in sales last month. The Kuga's third-quarter sales grew 4% and topped 24,000 units. But the bright spots in Ford's sales data weren't able to boost its total sales enough for even a modest year-over-year gain, and management is showing signs of changing its strategy.

Management now acknowledges that the "One Ford" strategy that fueled the companywide turnaround starting roughly a decade ago may now be outdated in certain markets, especially in China. A high-ranking company insider spoke anonymously to Reuters about the strategic issue: "One big issue at Ford China is that our decision-making process is too slow," one of the knowledgeable insiders said. "We try to manage everything, all aspects of the business under One Ford."

One example of Ford moving away from the "One Ford" strategy is the company preparing its truck-making Jiangling Motors joint venture to jump into electric commercial vans, rather than continuing to push only its Ford and Lincoln portfolio. While it's a new strategy, it's one that could prove worthwhile as more of China's massive cities reduce gas and diesel trucks and vans and turn toward electrified solutions.

China will continue to be a critical part of Ford's business, and it's clear that after years of low-hanging fruit and double-digit growth, it's time to adjust the strategy, speed up the company's decision-making process, and prepare for China's upcoming need for electrified solutions. If Ford can execute on those objectives over the next few years, it could certainly stoke sales growth in China and continue turning that market into a second pillar of revenue.