Venmo, the social network for transactions, is finally going to earn some real money for its parent, PayPal Holdings.

Two days ahead of its third-quarter 2017 earnings report, which will be released after the closing bell on Thursday, PayPal Holdings Inc. (PYPL -0.91%) announced that it's extending its popular social payment app Venmo to over 2 million retailers in the U.S. According to a blog post by Chief Operating Officer Bill Ready, this will allow Venmo users to check out in-store wherever PayPal is accepted.

Venmo has grown virally since Chicago-based Braintree, now a subsidiary of PayPal, acquired the then-fledgling company in 2012. Last quarter, Venmo booked $8 billion in total payments volume, or TPV, a measure of the dollar volume transacted on a given payments platform. This accounted for no less than 7.5% of PayPal's total TPV during the quarter.

Yet monetization has been slow, as Venmo's initial focus has been on scaling its user base. Millennials in particular have proved rapid adopters of the platform, which allows friends to split checks at restaurants or transfer obligations like rent money to each other in a social network setting without a fee.

As Venmo rolls out to PayPal's entire U.S. retail merchant base, the app will begin to meaningfully contribute to PayPal's take rate, or the amount of transaction fee revenue PayPal generates from its TPV. 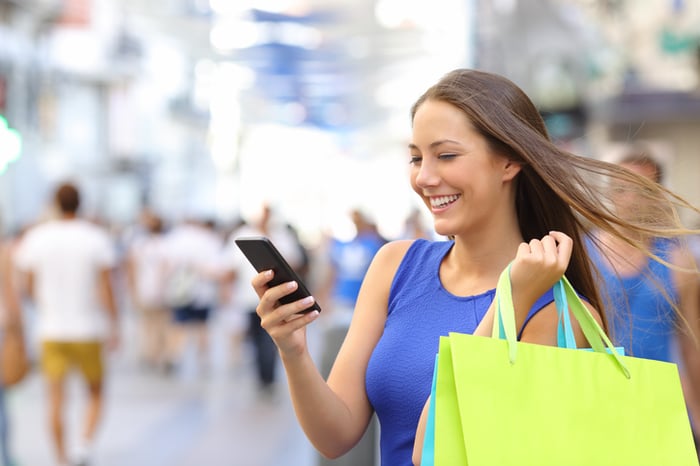 Opening up Venmo to merchants illustrates PayPal's long-held advantage over both entrenched competing payment processors, and companies, like Apple, that are attempting to gain a slice of the payments market via their own apps and digital wallets. PayPal's edge is that it functions both as a merchant and user platform. Innovations like the "One Touch" feature, which allows PayPal users to purchase goods online without having to log in to the service, also help merchants increase revenue by increasing sale conversions. This ultimately benefits PayPal's TPV and take rate.

Similarly, Venmo facilitates ease of use and opportunities for both parties in a transaction, and the implications for potential sellers are intriguing. As Ready described in his blog post yesterday:

With Venmo, merchants can reach a new audience of shoppers, many [of] whom skew millennial and engage with Venmo multiple times throughout the day. And the Venmo social feed represents an entirely new way for merchants to increase awareness and open new purchase opportunities. We're seeing in some instances that the appeal of Venmo has prompted some of the largest and most influential U.S. merchants to expand existing or begin new processing relationships with PayPal.

In recent years, retailers have engaged with customers on leading social media platforms in the hope that meaningful interactions will lead to increased loyalty and sales. But a social payments platform is potentially a much more direct tool for lifting sales, with a higher return on investment for the marketing effort.

With the retail shift, Venmo is also addressing vulnerabilities. It's firing back at Zelle, a new app developed by a consortium of big banks and credit unions, which aims at one of Venmo's shortcomings. While person-to-person transfers can be made instantly in Venmo, funds actually take a few business days to settle.

Zelle, however, allows for money transfers within minutes -- if both sender and receiver bank at one of the 35 participating consortium members. To protect its turf, Venmo also announced this week that it's implementing near-instant money transfers for a flat fee of $0.25. Apparently, PayPal's management has wagered that Venmo's devoted users, attached to its stylish, emoji-rich interface, will find this a reasonable toll for faster fund transfers.

A social payments app in the earnings spotlight

The announcement of Venmo's extension to retail merchants two days before PayPal's third-quarter report will heighten attention on the app's volume growth. Last quarter, Venmo's $8 billion in TPV was a 103% jump over the prior year's comparable period. In addition to assessing other important metrics this quarter, investors will be keen to begin making back-of-the-envelope calculations on the impact Venmo's current growth rate could have on earnings.

As an example of this rough math, PayPal's overall take rate has hovered around 3% over the last several quarters. So as Venmo's TPV continues to expand, and a portion transitions from peer-to-peer (no fee) to consumer-to-merchant volume at 3%, it's not unreasonable to assume that net profit from the app could reach into the hundreds of millions of dollars within a few years.

For context, PayPal has generated $1.5 billion in net income over the last 12 months. So the contribution could be significant, and the organization will naturally exhort merchants to vend more with Venmo. We'll fill you in on any details and guidance management provides on this increasingly important revenue stream in our recap of Thursday's earnings.