Drones could be big business for NVIDIA, but the chipmaker isn't alone in exploring this space.

Slowly but surely, drones are on their way to gaining mainstream adoption, thanks to their applications in a variety of fields. From delivering goods to taking aerial photos and videos, drones are being trained to serve in many roles.

Not surprisingly, consumer drone shipments are forecast to grow at an annual pace of over 31% through 2021, according to BI Intelligence. Meanwhile, enterprise drones are expected to clock a faster annual growth rate of over 51%. The drone market's terrific growth potential has encouraged a number of tech companies to jump on the bandwagon, and NVIDIA (NVDA -1.51%) is among them.

The tech specialist has been making steady moves to cut its teeth in this market, using its artificial intelligence (AI) expertise to make drones better. But can NVIDIA become a big name in the drone race, when tech giants such as Qualcomm (QCOM -0.91%) are already trying to make a dent? Let's find out. 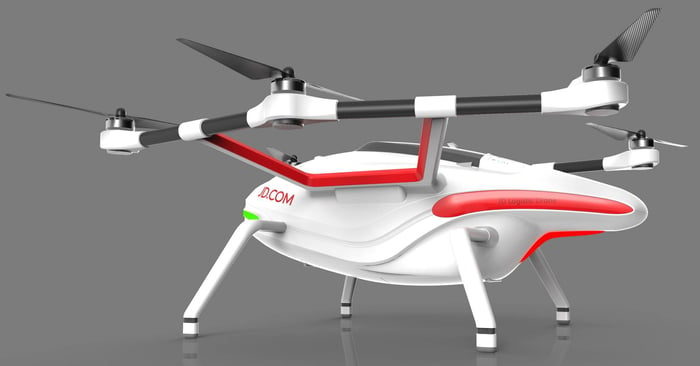 In June this year, NVIDIA revealed that it is leveraging its AI know-how to help drones fly without the need for global positioning system (GPS) satellites. Using its Jetson TX1 embedded AI supercomputer, NVIDIA relied on deep learning and inputs from computer vision to demonstrate that drones can fly themselves in remote areas where GPS connectivity is an issue.

Initially, the chipmaker focused on using the technology on forest trails, to find lost trekkers or to spot fallen trees, but is now testing it in indoor settings as well. NVIDIA took a consumer drone, equipped it with the Jetson supercomputer, and added two GoPro cameras to help the drone navigate on its own using visual recognition.

NVIDIA is already developing autonomous drones along similar lines. It has demonstrated a self-driving car that uses surrounding vision and deep learning to drive on its own, without any prior training in recognizing road markings, signs, or obstacles. It won't be surprising if the company decides to use the data gathered from its self-driving car program to accelerate autonomous-drone development.

The good news for NVIDIA is that its autonomous-drone tech is gaining credibility. In September, GE Ventures company Avitas Systems (a subsidiary of General Electric (GE 1.90%)) announced that it had partnered with the chipmaker, using NVIDIA's graphics processing units (GPUs) and AI expertise to train drones for industrial inspection.

Avitas aims to provide robot-based industrial inspection across multiple sectors. Solutions in which drones and robots carry out industrial inspection can gain a lot of traction in the long run since they can reduce costs and time due to increased operational efficiency while improving safety at the same time. Not surprisingly, Technavio forecasts that the use of robots in the inspection market will grow 17% a year until 2021.

So NVIDIA has found its way into a fast-growing niche in the drone market, backed by big industrial company GE. But the chipmaker isn't restricting itself to just the industrial space; its recent partnership with JD.com (JD 5.00%) indicates there are bigger possibilities ahead.

The e-commerce specialist's innovation lab, JD X, has announced that it is tapping NVIDIA's AI-enabled navigation technology. The two companies have developed a couple of new robots as a part of this initiative -- JDrone and the JDrover. The JDrone is being trained to serve a variety of purposes, ranging from delivering food and medicines to spraying pesticides.

The drone's payload capacity of 66 pounds (which might go up to as high as 440 pounds) and a top speed of 62 mph could help the two companies make a big dent in the logistics space, providing their execution remains strong.

Already JD.com is reaping the benefits of NVIDIA's AI technology: It has been able to reduce its logistics expenses by 70% when making deliveries to remote Chinese communities. It also has an ambitious plan to roll out 1 million drones in the next five years. Meanwhile, the JDrover, a ground-based robot using NVIDIA tech, is already being used to make last-mile deliveries on several university campuses in China.

It's clear that NVIDIA has made tangible progress in the drone space this year, thanks to its AI expertise. But will these moves translate into top-line gains in the long run, especially with Qualcomm working on a similar technology?

Sizing up the Qualcomm threat

NVIDIA isn't the only company developing drones that can learn about their surroundings and fly on their own. In January 2017, chipmaker Qualcomm demonstrated its Snapdragon Flight drone platform, which relies on machine learning to help drones fly autonomously. Like NVIDIA's, Qualcomm's drone doesn't need GPS for navigation.

Instead, its platform allows a drone to identify any obstacle that it faces in mid-air and instantly create a flight path, making drones suitable for cluttered indoor settings such as a warehouse or a factory. What's more, Qualcomm's drone platform delivers a complete package of hardware and software solutions that can be used by developers and original equipment manufacturers (OEMs) to create drones for application-specific tasks such as aerial photography.

Qualcomm is currently selling this kit for $675, but developers have to wait until next month to get their hands on it: It is currently sold out. This indicates that Qualcomm's drone tech has gained popularity in the developer community, which might make it the platform of choice for drone OEMs in the long run.

But NVIDIA investors shouldn't get alarmed about Qualcomm's presence, as NVIDIA has already landed impressive partnerships. Moreover, NVIDIA can leverage its autonomous vehicle experience to improve its drone tech, which could help it grab a bigger slice of the pie in the long run.