With the holidays coming up, toy and game shopping is about to heat up.

Toy and game retailers start ramping up inventory this time of year to prepare for the seasonal rush. In an industry with an estimated worth $26.5 billion, retailers like Toys "R" Us generate 40% of sales and 70% of operating profit during the key holiday quarter.

In recent years, the industry has attracted competition from the likes of Amazon.com (AMZN 0.73%) and Barnes & Noble (BKS), the latter of which has diversified into toys and games in order to prop flagging book sales. However, Toys "R" Us' recent bankruptcy indicates that all is not well for brick-and-mortar toy retailers, who may be looking forward to this holiday season even more than American kids.

According to research firm NPD Group, these are the top-selling toy properties for the first half of the year. 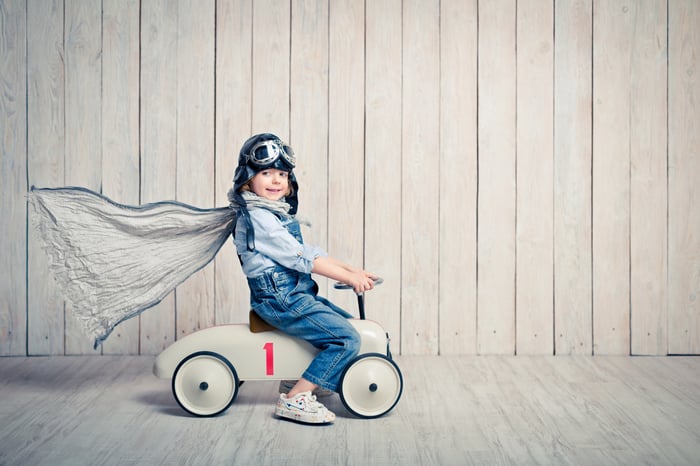 With Disney (DIS -1.13%) pushing the annual release of Star Wars movies, Star Wars toys are likely to remain popular as the franchise has long been a hit with kids as well as fans of the originals. Similarly, Legos have become a classic, so it's not surprising to see the combination of the two on the list. Among the iterations of this co-branding arrangement are video games, figurines, and buildable battleships like the Millennium Falcon.

The popular animated Nickelodeon show about six rescue dogs that launched in 2013 lends itself well to toy merchandising. Among the selection of Paw Patrol-branded items are plush toys, patrol vehicles like trucks and boats, and action figures. With the show's growing popularity, Paw Patrol toys could be on the list for years to come.

Another entry with a foothold in the animation world, Shopkins toys is a series of collectible figures based on grocery store items such as Apple Blossom, Cheeky Chocolate, and Kooky Cookie. Launched in 2014, the concept has branched off into a animated movie, web series, trading cards, and other related items.

The long-popular brand of children's toy vehicles remains popular. Little Tikes sells a wide variety of plastic wagons, tricycles, and other toys, like mini playgrounds, play kitchens, and a hot dog cart. Its toys are targeted at children from less than 1 year to preschool ages.

Another classic, Mattel's (MAT -0.93%) Hot Wheels continues to ring up sales with matchbox cars, track sets, collector items, and video games. In its most recent earnings report, Mattel said Hot Wheels' performance this year has been strong, as the brand is one of its three most important along with Barbie and Fisher Price.

The popular DC Comics hero finds itself halfway up the list despite underwhelming reviews for the most recent Batman movie, 2016's Batman vs. Superman: Dawn of Justice. Among the Batman toys available are figurines, a Batcave playset, and a Batmobile. Batman-related Halloween costumes are also popular this time of year.

Not surprisingly, Barbie finds itself on the list. The classic doll has been a favorite since it was introduced in 1959, with more than 800 dolls in the Barbie family sold since then. It's been a billion-dollar brand since 1993. Today, Barbie comes in a number of iterations, including fashion dolls, fantasy dolls, career dolls, and dreamhouses, though that hasn't helped pump up Mattel's growth.

NPD categorizes Star Wars toys separately from the LEGO offshoot, explaining the second appearance from the planetary fantasy franchise. Hasbro (HAS 0.04%) currently owns the license to manufacture Star Wars toys, recently taking it from rival Mattel, and the marketing muscle of it and Disney have made the collection a popular set. Among the top-selling Star Wars toys are action figures, blasters, lightsabers, vehicles, and droids.

Another Hasbro brand, Nerf's collection of eponymous foam toys has long been a kids' favorite. Nerf has been a staple of indoor play since its introduction in 1969, and it's become one of Hasbro's biggest brands since it acquired it from Tonka in 1991. Today, the brand may be better known for guns and blasters than the traditional balls adults associate with it, as its website largely features shooting devices.

The brand that started in the 1990s with playing cards and video games exploded in popularity again with the release of the augmented reality game Pokemon Go last summer, which momentarily catapulted Nintendo stock, though the game proved to be mostly a passing fad. Today, the most popular Pokemon toys are of the plush variety, and you can also buy Pokemon trading cards, figurines, and related board games and video games.

The number of legacy brands on the list shows that despite the upheaval on the retail side of the business, popular children's toy brands tend to endure from generation to generation. That's good news for companies like Hasbro and Mattel, which control much of the toy manufacturing business, and also Disney, which has created cash cow from licensing toys based on its popular movie franchises.