Please ensure Javascript is enabled for purposes of website accessibility
Log In Help Join The Motley Fool
Free Article Join Over 1 Million Premium Members And Get More In-Depth Stock Guidance and Research
By Ashraf Eassa - Updated Oct 20, 2017 at 7:50AM

A faster processor, richer display, and better cameras should make Apple's next low-cost iPad a winner.

Back in March, Apple (AAPL 1.62%) introduced a new, low-cost iPad with a 9.7-inch display. The device offered solid specs in an affordable package (the tablets started at $329 for Wi-Fi-only models with 32GB of storage). Unsurprisingly, that iPad helped to spur solid unit growth for Apple's iPad business. iPad unit shipments rose 15% year-over-year during the first full quarter that the new tablets were available.

Considering the obvious success of this product, it's only natural that Apple will want to update it when spring rolls around to keep the iPad sales momentum up. Let's go over three of the improvements that I expect with Apple's next-generation low-cost iPad. 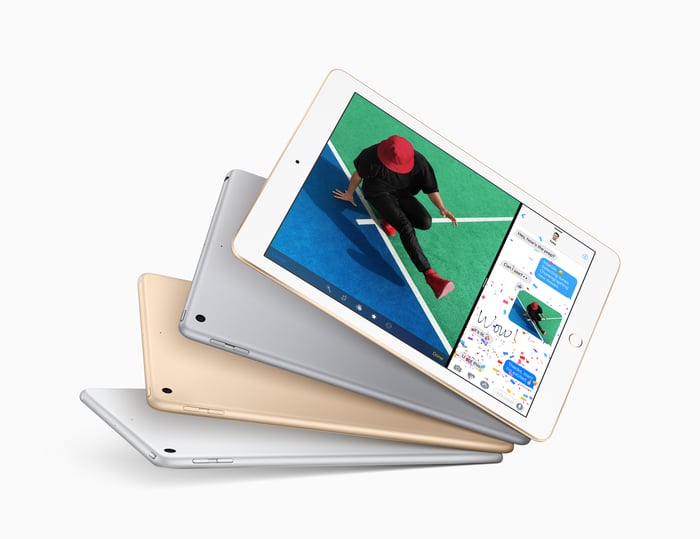 The current low-cost iPad uses an Apple A9 processor. Although the A9 is a zippy chip that can handle just about anything this iPad would be used for (web surfing, video playback, mobile gaming, and social media), more processing power generally translates into a snappier, richer user experience.

A new processor is also an easy way to market a new device to customers.

The 9.7-inch iPad Pro introduced in early 2016 included a wide color display. In a nutshell, a display with wide color capability can display a wider range of colors, which can make images designed for wide color displays appear more vivid.

Since then, Apple's iPhone 7 and iPhone 8 series devices, as well as current 10.5-inch and 12.9-inch iPad Pro tablets have all adopted wide color displays.

The current low-cost iPad, however, doesn't have a wide color display.

I think the main display upgrade that Apple will bring to the next low-cost iPad will be a wide color display. At this point, since the technology is so widely adopted across Apple's product lines and is therefore mature, it'd probably be relatively easy to include this technology in a low-cost iPad.

The current low-cost iPad has a 1.2-megapixel front-facing camera, or, as Apple refers to it, FaceTime HD camera.

Considering that an important use case for tablet buyers is likely video calling/video conferencing, upgrading the front-facing camera to, say, a 5-megapixel sensor could have a significant and positive user experience impact without driving up Apple's manufacturing costs by too much.

Additionally, I expect that Apple will update the rear-facing camera in the low-cost iPad to the same 12-megapixel camera found in the iPhone 6s.

Although I doubt that many iPad customers care that much about the quality of the rear-facing camera for the sake of photography or video capture (such activities are better suited for smartphones), Apple does seem to have very large ambitions to build iOS into the premier augmented reality platform.

Right now, only the iPhone 6s and newer iPhones, as well as the iPad Pro tablets, support apps built using Apple's augmented reality tool ARKit. I suspect that this is because these devices all have 12-megapixel rear camera sensors.

To that end, to enable support for ARKit apps in the next low-cost iPad, I expect the new low-cost iPad to come with the same 12-megapixel rear-facing camera subsystem that the iPhone 6s had.