It's been a banner year for defense stocks, as a favorable political climate coupled with an increase in geopolitical risk has caused shares of defense giants to outpace the S&P 500's 13% year-to-date gain. Raytheon (NYSE:RTN) and General Dynamics (NYSE:GD) have both enjoyed strong stock performances, up 33% and 24%, respectively.

Defense spending shows no signs of tapering. At these valuations, though, investors need to be picky about what they buy. Here's a comparison of Raytheon and General Dynamics to try to determine which is the smarter pick right now.

There are no bargains to be found among large-cap defense suppliers. Raytheon is currently trading at 25.97 times trailing 12-month earnings, compared to 21.10 times for General Dynamics. Both companies' multiples are higher than they have been for a decade. On a price-to-sales basis, both companies are again trading at levels unmatched in recent history. Both have similar dividend yields and each has a history of growing that dividend over time.

Despite the highs, it isn't hard to justify those valuations. Coming off near-constant budget battles during the Obama years, which culminated with sequestration and a freeze to spending growth, last November's election results and the prospect of single-party control of both the White House and Congress raised levels of optimism in the sector. Tough talk against Russia, China's expansion in the South China Sea, and saber-rattling in North Korea have only added to the call to boost defense spending, and as expected most of the debate between the White House and Congress is over how big the Pentagon budget boost will be.

While both companies look healthy, General Dynamics wins the battle of the balance sheet. The company had just $3.98 billion in long-term debt at the end of the second quarter, well less than Raytheon ($5.05 billion), and has a sector-best debt to equity ratio.  General Dynamics has significant flexibility should it see an opportunity to expand -- perhaps follow in the footsteps of Northrop Grumman's $7.8 billion purchase of Orbital ATK -- or wish to distribute more capital to shareholders.

Raytheon has outperformed General Dynamics in part because it generates significant revenue from areas of particular Pentagon interest right now; namely missiles, missile defense, and intelligence. Years of conflict in the Middle East have left the military short of armaments including Raytheon's Tomahawk missiles, and the company's Patriot missile defense system is a counterbalance to the risk of a rogue state firing on an ally.

General Dynamics meanwhile has more of a mixed bag in its portfolio. Like Raytheon, it has strong cyber and intelligence businesses, and its role as a major shipbuilder puts it in position to benefit from an ongoing U.S. Navy refresh. But elsewhere General Dynamics is out of step with Pentagon priorities. GD has a large combat systems group, producing battle tanks, tracked combat vehicles, and light armored vehicles, which was rolling during the Gulf War but which has slowed in the years since. 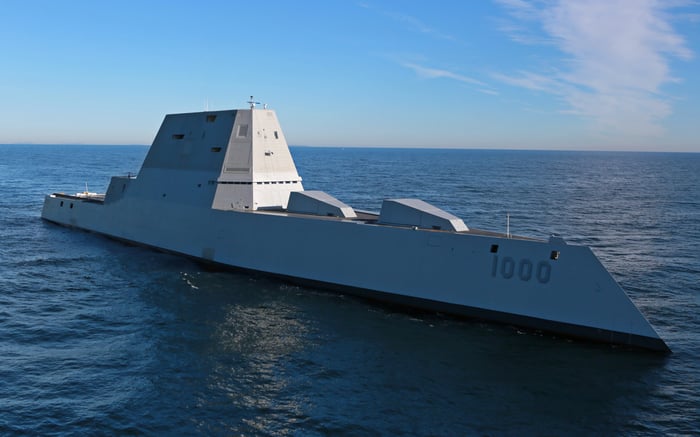 General Dynamics also owns business jet maker Gulfstream, a unit and an industry that was hit hard by the 2009 recession and has been slow to recover. A glut of nearly new planes delivered prior to the downturn has caused demand for new models to sag. The industry shipped 661 business jets worldwide in 2016, according to the General Aviation Manufacturers Association, down from 1,313 units in 2008. Gulfstream sold 115 jets in 2016, down from 156 in 2008, according to the same data.

There is some hope that the worst might be over for the sector. Deliveries were up slightly in the first six months of 2017 compared to the year prior, and a quarterly survey conducted by investment bank UBS released this month found the number of young, used inventories available for sale is finally nearing pre-financial crisis levels. Any uptick from Gulfstream would be a boost for General Dynamics going into 2018.

Go with the general

Raytheon is a solid company well-positioned for the future, and investors holding shares should sleep well at night. But when deploying new money it is hard to look past how far the company's shares have come in such a short amount of time and wonder even in a strong environment how much more room there is to run.

General Dynamics isn't cheap either. But the potential for a rebound in the business jet market, coupled with the flexibility provided by its best-in-sector balance sheet, gives the company some potential catalysts. For now, at least, General Dynamics is the better buy.