Find out why CEO Kevin Plank believes the company has all the tools it needs to double revenue.

Under Armour (UAA 2.04%) (UA 1.19%) has been on the ropes for some time now with growth slowing and a difficult retail environment in the U.S. Shares are down over 50% in the past year. 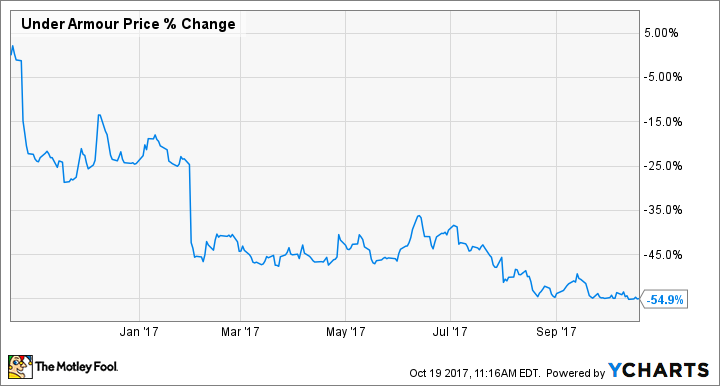 CEO Kevin Plank and CFO David Bergman sat down last month at Goldman Sachs' 24th Annual Global Retailing Conference. During the discussion, they shared what they believe will be key to doubling revenue for the company.

Plank set the stage with these comments:

And so I feel like we've accomplished that and a lot of people I think focused on the things that we don't have versus the things that we do have as a company or as a brand. And to be clear, I think you've heard me say the phrase now that we're out of acquisition mode and into activation mode. We have enough, in order for us to be an authentic brand ...

In 2016, Under Armour reached almost $5 billion in annual revenue, and the company started turning its sights to the next growth milestone of $10 billion. In conference calls, management talked about investing to sustain growth, but that tone has changed in recent months. At the company's annual meeting, Plank emphasized that the company was in "activation mode" -- to execute with its current set of assets.

So does Under Armour really "have enough"? Let's take a quick look at what the company can activate:

All that's left is execution

Given that company leadership believes they have all the assets they need to grow the company, all that's left for the company is to execute. And Plank knows this (emphasis mine):

And so what I think you'll see us focused on is ... we've got enough distribution, we just need to become excellent everywhere we do business -- and ensure that it is segmented, the product is differentiated, there is a reason for the consumer to go there.

In the same interview, Bergman talked about ensuring that the company has a "more complete product assortment" to sell, regardless of the weather this holiday season. That's a good plan for the upcoming quarter, but in the end, as Plank has written on the whiteboard in his office, the company just needs to "sell shirts and shoes". As a longtime shareholder of the company, I couldn't agree more.