Please ensure Javascript is enabled for purposes of website accessibility
Log In Help Join The Motley Fool
Free Article Join Over 1 Million Premium Members And Get More In-Depth Stock Guidance and Research
By Keith Speights, Matthew DiLallo, and Timothy Green - Oct 22, 2017 at 7:32AM

Real estate, fast food, and pharma could give investors some protection when the next crash comes.

Nearly a decade has gone by since the last market crash. No one knows when the next one will come, but it will happen sooner or later. But while some stocks plunge dramatically during a market crash, not all of them do. 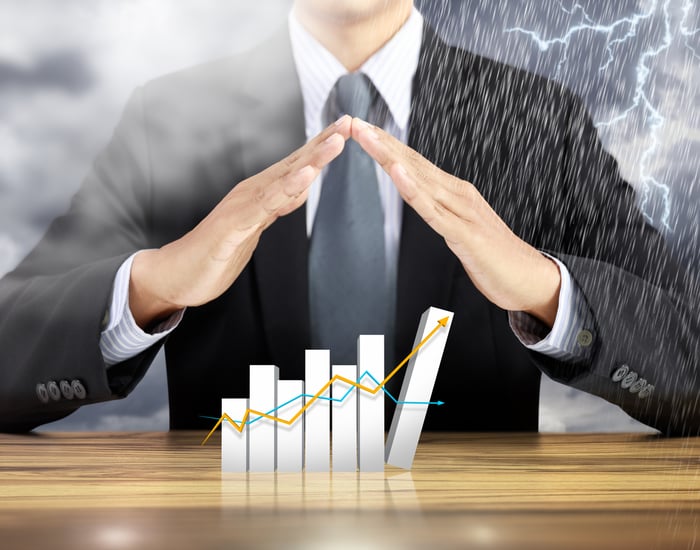 Matt DiLallo (W.P. Carey): Three factors make W.P. Carey an excellent high-yield stock to hold when markets grow turbulent. First, the real estate investment trust (REIT) should generate stable income no matter what's going on in the market. Supporting this view is the fact that the company owns nearly 900 properties in the U.S. and Europe that boast 99.3% occupancy, which it leased to more than 200 tenants that have an average remaining term of almost a decade.

In addition to that, the company has an investment-grade balance sheet backed by low leverage metrics. For example, the company has 62% equity in its assets when most commercial property owners are comfortable with less than 50%. That's one of the reasons why W.P. Carey recently won a credit-rating upgrade. Further, long-term, fixed-rate debt makes up the bulk of its borrowings, which limits its exposure to rising interest rates.

Finally, W.P. Carey has a conservative dividend payout ratio for a REIT of 76% this year, which is an improvement from 80% a few years ago.

Because of these factors, the company should have no problem continuing to pay investors during a market meltdown. In fact, it should be able to keep growing its payout, which is something it has done every year since 1998 despite several market crashes. That's why investors will want to have W.P. Carey in their portfolios before the next one comes because it will allow them to rest easy knowing that its 5.9% yield will continue flowing into their brokerage accounts.

A dividend with a side of fries

Tim Green (McDonald's): Fast-food giant McDonald's has enjoyed a soaring stock price over the past year. The downside for dividend investors is that the yield isn't all that high any more. McDonald's' stock yields about 2.3%. Most people may not consider that high-yield territory, but with the S&P 500 sporting a dividend yield below 2%, McDonald's' dividend looks generous in comparison.

Given that McDonald's is a restaurant chain focused on providing value to its customers, it's capable of thriving even if the economy takes a turn. The company's recent initiatives, like all-day breakfast, its mobile app, and online ordering and delivery, have helped reinvigorate its sales. During the second quarter, global comparable sales soared 6.6%, while U.S. comparable sales jumped 3.9%. If the market crashes, McDonald's has some momentum behind it.

The payout ratio is about 61% based on trailing-12-month earnings. It's been higher at times in the past, so there's some room for McDonald's to boost the dividend absent earnings growth. The good news is that earnings have been surging recently, with a 36% jump in earnings per share (EPS) during the second quarter. That pace will be tough to maintain, but even slow earnings growth will be enough to drive the dividend higher.

If you're looking for a dividend stock that won't pull the rug out from under you in a market crash, McDonald's is a good bet.

A stock that's never tanked in a market crash

Keith Speights (AbbVie): AbbVie is one stock that's never gone down during a market crash. There's a good reason why: It has yet to endure a market crash. AbbVie was spun off from parent Abbott Labs (ABT -0.56%) in 2013. The market has been a bullish investor's dream through most of the nearly five years of AbbVie's existence as a stand-alone company.

However, I think there are several reasons to think that AbbVie would fare quite well if the market plunges. For one thing, Abbott Labs performed nicely during the last market crash. While the S&P 500 index plummeted by nearly 38% in 2008, Abbott stock only dropped 4%.

Also, the nature of AbbVie's business should make the stock less likely to nosedive. Market crashes typically are associated with major global crises or deteriorating economic conditions. Neither should impact the demand for AbbVie's products, which include top-selling autoimmune disease drug Humira and cancer drug Imbruvica, which is on course to become one of the top five best-selling cancer drugs in the world.

Generally speaking, dividend stocks perform better during market downturns than do stocks that don't pay dividends. AbbVie ranks as one of the better dividend stocks around, with a yield of 2.82% and a track record of increasing its dividend for 45 consecutive years (counting the time it was part of Abbott Labs). There's no guarantee that AbbVie stock won't take a hit during a market crash, but I'd say it's a safer bet than most stocks.