Please ensure Javascript is enabled for purposes of website accessibility
Log In Help Join The Motley Fool
Free Article Join Over 1 Million Premium Members And Get More In-Depth Stock Guidance and Research
By Brian Withers - Oct 22, 2017 at 11:47AM

Find out when management is projecting getting back to 20%-plus top-line growth.

Investors aren't expecting year-over-year revenue growth from athletic apparel company Under Armour (UA 1.19%) (UAA 2.04%) when it reports third-quarter earnings on Oct. 31, as the company has projected a flat figure. But perhaps more important will be what management has to say about the upcoming holiday season.

In last quarter's earnings call, the company backed off its full-year growth targets, from a range of 11% to 12% down to a range of  9% to 11%, leaving investors wondering about the future of this onetime Wall Street darling. When the company reports earnings this time, I'll be watching for what happens in the company's largest region, how its growth engines are doing, and for an update for the all-important holiday quarter.

The challenging North American region made up 76% of Under Armour's total revenue last quarter. This marketplace has been a difficult one for sports apparel retailers and manufacturers since Sports Authority went bankrupt in early 2016. To give you an idea, in Dick's Sporting Goods' most recent quarterly report, the company posted barely positive same-store sales, and is projecting full-year same-store sales to be flat to a decline in the low single digits. Dick's is Under Armour's largest wholesale partner.  After posting 6% year-over-year North American revenue growth in Q4 2016, Under Armour lost 1% in Q1 2017 and only managed to break even in Q2.

This year, the company has brought on Kohl's to open up its wares to a potentially new set of customers. Under Armour hasn't shared any specifics about the Kohl's partnership, other than that the initial launch "exceeded expectations." 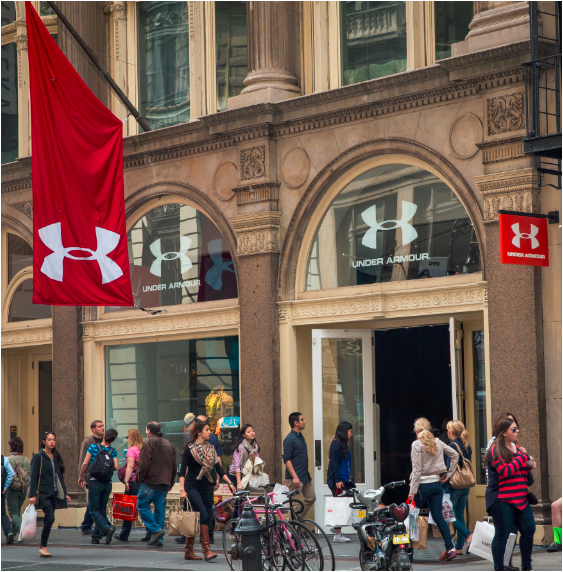 While I won't be surprised if the company posts negative numbers in North America, I'll be looking for comments on the health of the Kohl's partnership and indications on how the company plans to get back to growth in this important marketplace.

Checking on the growth engines

International and direct-to-consumer are two bright spots for the company, as recent growth trends have been stellar, with the segments accounting for 22% and 35% of revenue, respectively, in the most recent quarter. Year-over-year international revenue growth has been 55%, 52%, and 57% over the past three quarters, while direct-to-consumer growth has come in at 23%, 14%, and 20%.

Given those numbers, it may be no surprise that Under Armour has targeted 80% of its company-branded stores to be outside the United States. If there's a marked slowdown in this region, it could signal that the company is losing brand cachet, and that would be a bigger concern for investors.

Looking ahead to Q4

In Q4 2016, the company's 26-quarter run of 20%-plus growth came to an end. CFO David Bergman projects growth for this year's Q4 to be back in the "low to mid-20s percentage," and there's plenty of pressure to make it happen. In a recent interview with Goldman Sachs analysts, Bergman laid out the reasons the company would be successful despite the headwinds in the brick-and-mortar space. "We're going to have a more complete assortment ... to meet the needs of any change in the weather, being able to make sure that we've got more newness and more freshness on the floor," he said.

Later in the same interview, Bergman noted that the fourth quarter would be the "easiest comp" of the year. If the company backs off its full-year revenue target again during its third-quarter report, the stock will likely get punished even more than it has. I'll be watching for signs that Under Armous is still confident on its forecast for the fourth quarter.

While this quarter is not a make-or-break moment, investors are looking for signs that the company is on track to solid, consistent growth. The results and management comments due on Halloween will give investors insight on how things are going.