Please ensure Javascript is enabled for purposes of website accessibility
Log In Help Join The Motley Fool
Free Article Join Over 1 Million Premium Members And Get More In-Depth Stock Guidance and Research
By Reuben Gregg Brewer - Oct 24, 2017 at 8:16AM

Shell has a bigger yield, but that doesn't mean it offers investors a better value than Exxon in the oil industry today

Income investors who take a quick look at Royal Dutch Shell plc's (RDS.B) 6% dividend yield might be tempted to think it offers a better value than ExxonMobil Corporation (XOM 2.23%) with its 3.7% yield. There are good things taking shape at each of these integrated oil majors -- but when you look past the dividend yield, Exxon appears to be the better value. Here's why.

During the worst of the oil downturn that started in mid-2014, Shell agreed to acquire BG Group. That move, which cost roughly $50 billion, helped increase the company's debt level by over 50% in 2016. Investors were clearly concerned, pushing shares down to the lowest price to tangible book value ratio they had seen in a decade at the start of 2017. 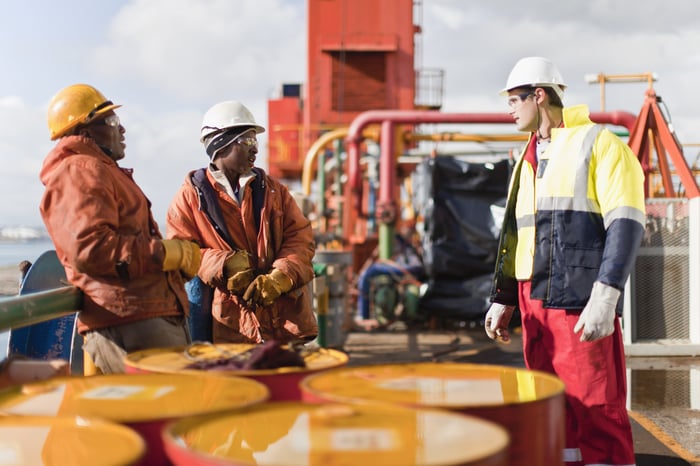 But Shell has been working quickly to reduce that debt, having already agreed to or completed the sale of $25 billion worth of assets (out of a $30 billion target). And its return on invested capital, which has been hampered over the years by large profile misses like arctic drilling, has started to move higher too. Management believes it can get that number up to 10%, even if oil prices are in the $60 a barrel range. That's a higher return than Shell managed between 2013 and 2016, when oil averaged $90 a barrel.

Add in oil prices that have solidified in the $50 a barrel range and investor concerns about Shell appear to have waned. The company's price to tangible book value is back up toward the top of the range it has traded in for most of the past decade. I wouldn't call it expensive, per se, but it appears to be fairly valued at present.

Bottom line: investors have clearly already rewarded Shell for the improvements it's made.

More value for the buck

Then there's Exxon, which, despite the lower yield, could offer income investors a better value proposition. This energy giant's price to tangible book value, for example, is up from its lows but still near the lowest levels of the past decade. That might make you think that Exxon is struggling to deal with headwinds that Shell has easily surmounted. But that's not the case. 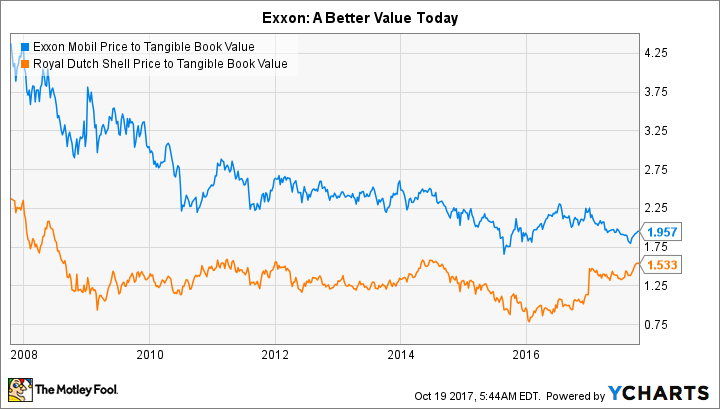 For example, Exxon took on debt during the downturn to support its dividend and capital spending, as most oil majors did. However, it didn't take on a giant acquisition like Shell. Repairing the balance sheet, which remains quite strong despite the added leverage, isn't as worrying an issue.

Meanwhile, Exxon has long been an industry leader when it comes to return on invested capital. It has proven year in and year out that it is among the best-run oil companies in the world. Yes, returns took a hit during the energy downturn, but like Shell they are starting to turn higher again. Note in the graph below that Exxon's returns remain higher than Shell's even today. 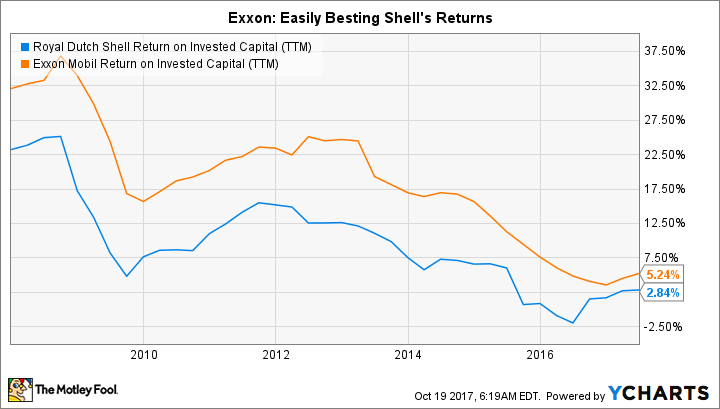 And then there's the future. Exxon has two sizable catalysts for production growth:  the Permian Basin in the United States and an offshore field in Guyana. These opportunities don't appear to be priced into Exxon's valuation today.

Exxon's yield may be materially lower than Shell's, but that doesn't tell the whole story. Exxon has long been one of the best operators in the oil business, has a solid balance sheet, and has notable production growth opportunities ahead of it. But investors remain unimpressed.

Meanwhile, investors have rewarded Shell for its efforts to dig itself out of a balance sheet hole and for improving its lagging capital investment results. That's not to suggest that Shell is a bad company or even a bad investment: if you are searching for a high yield, it appears fairly valued today. But if you want a high yield and a good value, Exxon looks like the better opportunity right now.