Please ensure Javascript is enabled for purposes of website accessibility
Log In Help Join The Motley Fool
Free Article Join Over 1 Million Premium Members And Get More In-Depth Stock Guidance and Research
By Daniel Sparks - Oct 24, 2017 at 10:01AM

Can Chipotle's queso save the day? Can iRobot keep up its surging growth?

Earnings season is here. And every day there are some stocks moving double-digits in either direction as companies under and outperform expectations. This volatility will likely continue this week.

Two stocks worth checking on when they report earnings this week are iRobot (IRBT -0.53%) and Chipotle (CMG 1.34%). Both companies are scheduled to report their third-quarter results after market close today. And both stocks could see big swings. 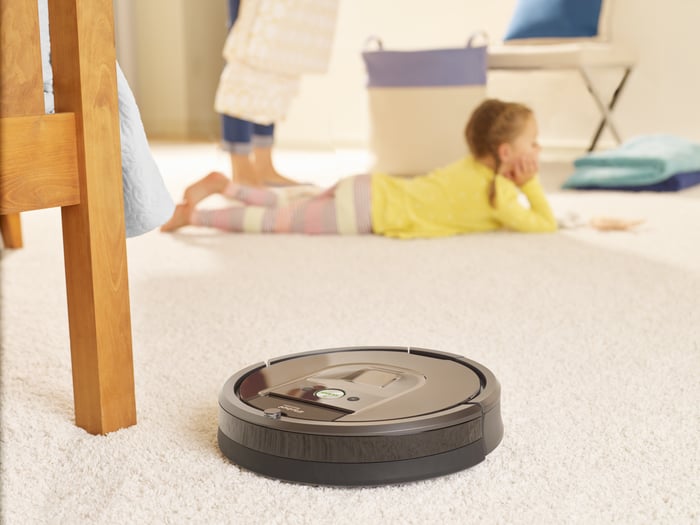 Chipotle: Can queso save the day?

Chipotle is still caught up in the middle of recovery mode. While its second-quarter comparable restaurant sales increased 8.1% year over year, Chipotle's two-year stack of comparable store sales (the sum of the last two years of same-store sales for a given period) were down 17.4%, highlighting how Chipotle still has a long way to go before same-store sales return to their pre E. coli levels.

In Chipotle's second quarter, CEO and founder Steve Ells said the company was seeing encouraging signs of a turnaround but acknowledged that there was still "a lot of opportunity to improve our operations and deliver the outstanding experience our customers expect."

Investors are hoping Chipotle's new queso product, launched at all U.S. restaurants in the U.S. on Sept. 12, will provide a nice boost to the quarter. According to management, queso has always been the most requested menu item. But Chipotle avoided adding it until September because it wanted to find a way to make a compelling queso without using additives.

iRobot: Can it keep up its massive growth?

Unlike Chipotle, iRobot is very much in growth mode. Shares are up 68% in the past twelve months as revenue and earnings soar. The question headed into iRobot's third-quarter results, therefore, is whether the company can keep up its surging growth.

In iRobot's second quarter, revenue increased 23% year over year and exceeded management's expectations. As a result, management increased its outlook for the full year significantly. iRobot said it now expected revenue of $815 million to $825 million for the full year when excluding expected incremental revenue from its acquisition of Robopolis. Previously, management had expected full-year revenue to be between $780 million to $790 million.

For iRobot's second quarter, analysts expect iRobot to report quarterly revenue of about $205 million, up about 21% from the year-ago quarter.

Any upside or downside surprise on iRobot's revenue is not only possible, but likely. Management has said in the past that estimating revenue is difficult in Q3 as it's challenging to discern the revenue split between Q3 and Q4 since the periods include unpredictable shipments of consumer products for the holiday season.

One key metric investors may want to pay particularly close attention to is iRobot's consumer revenue in the U.S. In iRobot's second quarter, it was up 45% year over year, helped by Amazon's Prime Day and the introduction of Roomba 890 and 690 wi-fi connected vacuums in the U.S. While the segment's blistering growth is unlikely to remain this high in Q3, it will be interesting to see whether it decelerates significantly or not.

Stay tuned at The Motley Fool for follow-up analysis on both of these companies' earnings reports.