Shares of Knoll, Inc. (NYSE:KNL) jumped as much as 20% in early trading Tuesday after the company reported fiscal Q3 2017 earnings last night that easily beat Wall Street's estimates. Analysts had projected that Knoll would earn $0.35 per share in Q3 on sales of $277.4 million, but the company actually reported earnings of $0.39 per share on sales of $291.3 million. 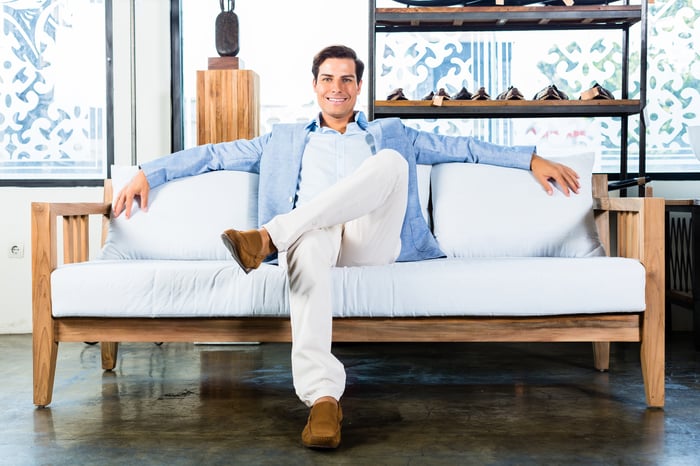 Knoll's earnings have been declining over the last few quarters, so the furniture maker's earnings beat today came as something of a surprise to investors -- perhaps for more reasons than one. As the company explained in its report, sales were down a fraction of a percent in comparison to last year's Q3, while operating profits declined 15% and earnings per diluted share were down 11%.

Nonetheless, the results were better than Wall Street had anticipated. Adding to investors' enthusiasm was the fact that Knoll CEO Andrew Cogan says that the company has reached "an important inflection point" and that its sales have "stabilized."

Knoll management declined to provide earnings guidance in its report, but analysts who follow the stock believe that both sales and profits will rise sequentially in the current fourth fiscal quarter. By year-end, Wall Street is looking for Knoll to earn $1.38 per diluted share on sales of $1.1 billion.

If that's the way things play out, Knoll stock appears to be selling for about 16 times this year's earnings -- not a bad price for a stock that Wall Street expects to grow at 16% annually over the next five years (and that pays a 3% dividend). If Knoll can repeat Q3's feat in Q4 as well, today's buyers will be glad they jumped back on board when they did.