The automaker's product renaissance continues -- but it's being cautious with its electric-car investments.

At the Tokyo Motor Show on Wednesday, Honda (HMC 0.25%) unveiled its new Sports EV Concept, the second in a series of electric vehicles that the automaker could bring to market within a couple of years. 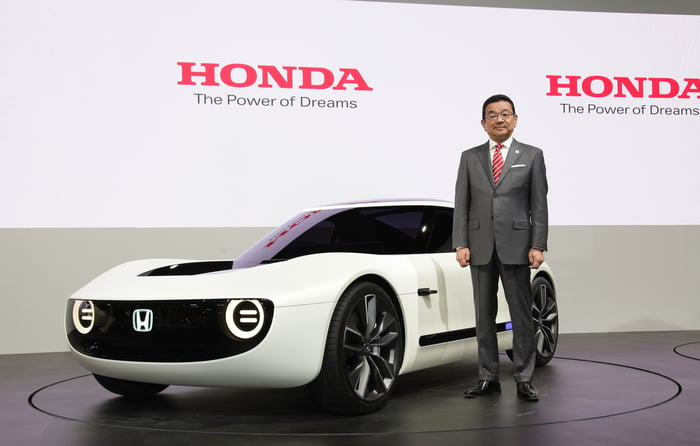 About the Honda Sports EV Concept

"This Sports EV Concept is a new proposal from Honda," CEO Takahiro Hachigo said. "[Honda is] a company which always, regardless of the requirements of the times, wants to provide its customers with the joy of driving, at the will of the driver, with a sporty and exhilarating driving experience."

The new vehicle builds on the ideas introduced by Honda's Urban EV Concept, which it unveiled in September. It uses the same platform, an all-new architecture that Honda created specifically for smallish, affordable electric vehicles.

Compared to the Urban EV Concept, which is intended as a fun urban runabout, the Sports EV Concept has a lower center of gravity to improve handling -- and, obviously, sleeker coupe styling. 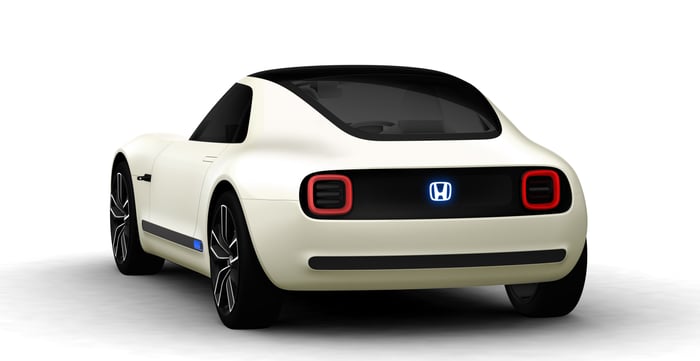 That said, it's very possible that one is in the works.

An update on Honda's electric-car strategy

After a period of advancing in fits and starts, Hachigo has clarified that Honda is making a big move into battery-electric vehicles. The company expects that by 2030, two-thirds of its global sales will come from electric vehicles and advanced hybrids -- and it expects to hit that goal earlier in some markets, like Europe. 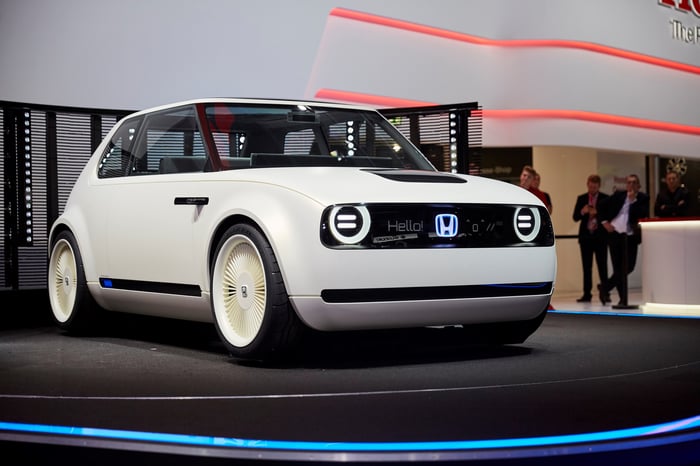 Hachigo said last month that the production version of the Urban EV Concept will go on sale in Europe in 2019. In Tokyo on Wednesday, he announced that Honda will begin selling compact electric vehicles in Japan in 2020. But, he said, the still-high costs of batteries made it unlikely that Honda would launch its new compact electric cars in the U.S. in the near term.

Since he took over as CEO in 2015, Hachigo has mostly impressed  with his vision for Honda. Already, with the latest Civic and Accord, it's clear that the automaker is putting more passion into its product designs than it has in many years.

The design of the Urban EV Concept, a futuristic riff on the earliest 1970s-era Honda Civics, clearly comes from the same place: It's drawing on the much-loved products of Honda's past to create new vehicles that owners will bond with in the same way.

That may sound a bit mushy, but it's good for hard-headed business reasons: All other things being equal, more compelling products sell at stronger prices and generate better profits. That will continue to be true as electric vehicles become mainstream.

The news that Honda isn't likely to bring its new compact electrics to the United States in the first wave will disappoint some potential buyers. But battery costs are expected to drop sharply over the next several years. If the new vehicles are well-received elsewhere, there's a good chance that they'll be offered in the United States as well, in time.