The era of mind-boggling losses is coming to an end at the social media company. But that doesn't mean the stock is a buy.

Between 2013 and 2016, social media company Twitter (TWTR -0.98%) reported $2.2 billion of cumulative net losses. That's nearly equivalent to Twitter's annual revenue. Revenue growth ground to a halt this year, so the only path toward profitability was to dramatically slash costs.

Twitter's third-quarter report showed some serious progress on that front. Revenue declined by 4% year over year, but operating expenses were reduced by so much that the company produced a positive GAAP operating profit for the first time in its history. A GAAP net profit is possible during the fourth quarter if Twitter hits the high end of its guidance, something that looked out of reach as recently as last year. 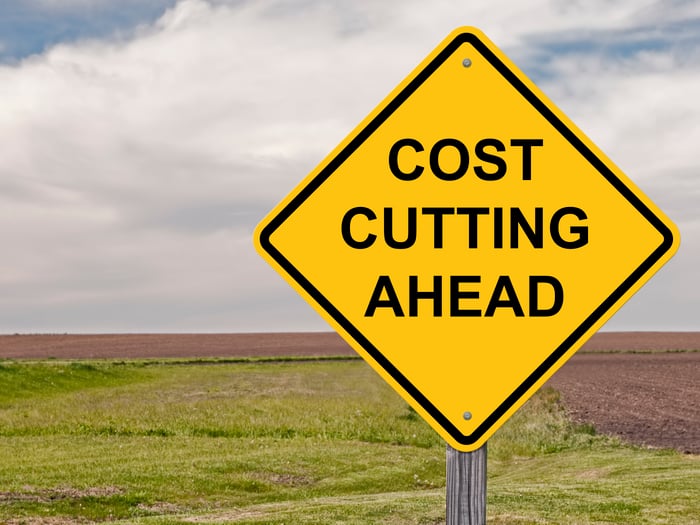 Twitter's march toward profitability is a welcome sight for investors. But with revenue moving in the wrong direction, the stock still looks awfully expensive.

Twitter's GAAP expenses, which includes cost of revenue as well as operating expenses, dropped by 16% year over year to $582 million during the third quarter. Research and development spending dove 23% to $136 million, while sales and marketing spending dropped by the same percentage to $173 million.

Twitter is finally bringing it under control. Stock-based comp declined by 36% year over year during the third quarter, dropping from $159 million during the prior-year period to just $101 million. For the fourth quarter, Twitter sees it falling to a range of $90 million to $100 million.

Besides reducing GAAP losses, cutting back on stock-based comp lowers the dilution suffered by Twitter shareholders. The diluted share count rose by just 3.3% year over year during the third quarter. Between the end of 2014 and the end of 2016, the share count soared 16%.

This cost-cutting led to a positive GAAP operating profit of about $7.3 million during the quarter. Twitter still posted a small net loss of $17.5 million, with interest on its debt knocking down the bottom line. But that's up from a net loss of $96.3 million during the third quarter of 2016. Pushing into the black on an operating basis is a major accomplishment for a company that has a knack for producing staggering losses.

Twitter doesn't provide straight earnings guidance. It instead provides an estimate for adjusted EBITDA, a mostly useless number. But the company sees GAAP net income turning positive if it hits the high end of its adjusted EBITDA guidance. Twitter's first truly profitable quarter could be just around the corner.

The stock is still expensive

Twitter investors should be thrilled that the company is on the cusp of turning a profit. With the stock jumping following the third-quarter report, Twitter's market capitalization is up to about $15 billion. That's far below Twitter's peak of around $38 billion reached soon after its IPO in late 2013, but it's still excessive given the company's fundamentals.

Twitter will produce roughly $2.4 billion of revenue this year, putting the market capitalization at more than six times sales. Given that Twitter is no longer growing revenue, that seems way too high. Revenue growth could return down the road, but there's no sign that the current trend is shifting.

Once Twitter becomes profitable, investors better hope the stock doesn't start being valued based on earnings. The company would need to produce hundreds of millions of dollars in net income annually to justify the valuation, and even then, it would sport a nose-bleed price-to-earnings multiple.

Twitter is doing the right thing by cutting costs, turning its business into a sustainable enterprise instead of a bottomless money pit. But even with real profitability on the horizon, the stock price bakes in far too much optimism.