When it comes to banking, few things are more important than operating efficiently. And when it comes to efficiency, few banks measure up to JPMorgan Chase (JPM 1.28%), which has one of the lowest cost bases in the industry, especially among the nation's biggest banks. 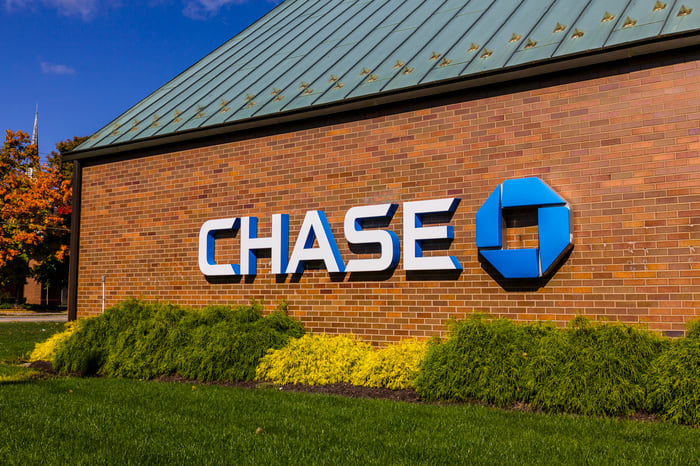 You can see this by looking at JPMorgan Chase's overhead ratio, more commonly known as the efficiency ratio. This reflects the percent of revenue a bank spends on operating expenses. It's calculated by dividing noninterest expenses by a bank's net revenue.

As a general rule, banks strive to maintain an efficiency ratio at or below 60%, a threshold that Bank of America (BAC 1.38%) recently crossed for the first time since the financial crisis, reporting a ratio of 59.5% for the three months ended Sept. 30, 2017.

JPMorgan Chase, by contrast, has consistently come in below the 60% threshold over the years, a testament to chairman and CEO Jamie Dimon's notorious cost consciousness. Its efficiency ratio in the third quarter was 55%.

Not all of JPMorgan Chase's units contribute equally to the bank's laudable efficiency. You can see this in the table below, which breaks the bank down into its four operating segments and provides the associated overhead/efficiency ratios.

The least efficient of JPMorgan Chase's operating segments is its asset and wealth management division. This is ironic because this also happens to be its most profitable, turning in a 29% return on equity in the third quarter, which handily exceeded the runner-up segment, consumer and community banking, which earned a 19% return on equity.

Sitting in the middle is JPMorgan Chase's corporate and investment bank. You can think of this as the bank's Wall Street operations, which is subject to notoriously high salaries and compensation costs. Despite these costs, though, at 56%, the segment's efficiency ratio is impressive in its own right.

This leaves JPMorgan Chase's commercial banking unit as its most efficient, with a ratio of only 37%. Why is this so low, particularly compared to its other traditional banking operations?

The reason is that this unit deals with fewer but bigger clients. In its consumer bank, JPMorgan Chase must staff thousands of branches with tellers, managers, and personal bankers, all of whom serve clients with comparatively modest resources. That costs a lot of money relative to the revenue each of these customers produces for the bank.

But the equation is reversed in the bank's commercial banking operations, where each client and transaction is larger, thereby producing more revenue relative to the expenses needed to service the client. It's this scale that's naturally built into JPMorgan Chase's commercial banking segment and that explains why it's the bank's most efficient segment.