One of EA's most anticipated games is going through a dramatic rework.

Right in time for the Halloween season, Electronic Arts (EA 0.89%) has delivered news that has given some shareholders a fright. The publisher announced on Oct. 17 that it would be closing Visceral Games, a studio within the company that had been working on a big-budget Star Wars game. The title will be picked up by a new team but will undergo a substantial change in direction and is now likely years from release.

With the company's shares down roughly 4% following the news, it's worth taking a look at whether the closing of Visceral is merely a near-term setback or a potential indication of more serious problems at EA. 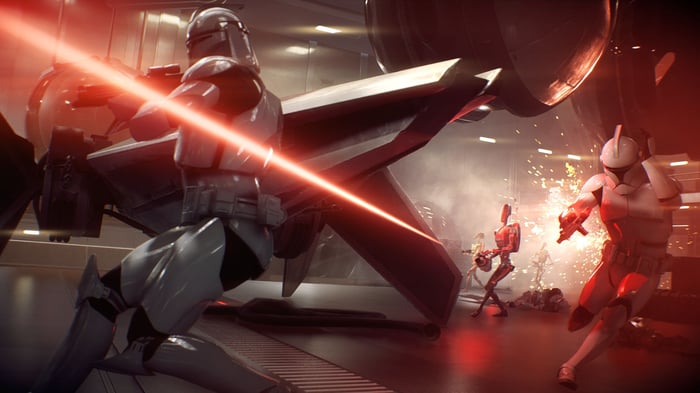 EA's Star Wars Battlefront II will still be launching this November, but one of the company's other in-development games based on the famous sci-fi series appears to be in trouble. Image source: Electronic Arts.

How bad is the fallout?

The closing of a video game studio is rarely cause for celebration so it makes sense that news of a faltering developer and project would be accompanied by a stock sell-off. At a basic level, the closure is an admission that something wasn't working within the Visceral team and that EA no longer saw the unit as a smart use of resources. This sort of thing is not uncommon in the industry.

Game development is expensive, and the studio had reportedly been working on the untitled Star Wars game for roughly three and a half years. Opting to shutter Visceral and dramatically rework the game is not a decision that was taken lightly, and it will be difficult to recoup production costs even if the title is completed and winds up being sales hit.

That said, shutting down a studio is not necessarily dire news for long-term investors. As with any business, there will be units that underperform. Having the flexibility to address these issues and reshuffle to better fit the needs of the overall company is a necessary part of operational success.

To put the closing of Visceral in perspective, it's worth taking a look at another high-profile studio shutdown from recent years.

Following the release of Take-Two Interactive's (TTWO 1.90%) Bioshock Infinite in 2014, the company opted to close down the title's developer, Irrational Games. This was a studio that was responsible for well-received titles that had sold millions of units but was still going over budget and creating a questionable value proposition for the company. Opting to shut down a studio that was responsible for some of its most critically acclaimed titles might have seemed like a worrying move at the time, but Take-Two's overall performance has only improved in subsequent years.

That's not to say that these two situations are perfectly analogous, but closing one development team and shifting much of its talent to other units probably isn't a big deal for a company of EA's size.

Visceral's Star Wars project was intended to be a story-focused adventure that would deliver cinematic gameplay set in the galaxy far, far away. By most accounts, the game was primarily a single-player experience -- a characteristic that would have put it out of step with today's best-performing titles.

If you think of a video game as being similar to a sandbox, adding new multiplayer content is like adding a new accessory to the box that can be experienced by numerous users simultaneously. Creating single-player expansion content is like building an entirely new offshoot environment to play in, but it can only be used by one person at a time and is more expensive and less likely to increase total play time. Put simply, the economics of the video game market are not favorable to single-player focused experiences at the moment.

If Visceral's project wasn't coming together after more than three years in development, the decision to change the game's direction is probably a sensible one. EA has been a well-managed company under CEO Andrew Wilson, so shareholders can be reasonably confident that the company is making the right move disbanding the studio.

The future of Star Wars games

EA signed a 10-year deal with Disney (DIS 1.84%) for exclusive video game rights to the Star Wars franchise in 2013. If additional projects wind up running into production difficulties or underperform upon release, Disney might seek to find a new partner for the license when the deal expires. That's probably an unlikely outcome, however. EA's 2015 release Star Wars Battlefront sold more than 14 million copies, its sequel Battlefront II is expected to match or exceed that figure, and mobile release Galaxy of Heroes has been a solid performer.

So, while news of Visceral shutting down and a big change in direction for the studio's former title is a setback, it probably won't have a major long-term impact for shareholders. It's unfortunate that the Star Wars project didn't come together under Visceral, but investors should view the studio closure as a bump in the road on EA's long-term growth path and not a major sign of weakness in the broader business.