Please ensure Javascript is enabled for purposes of website accessibility
Log In Help Join The Motley Fool
Free Article Join Over 1 Million Premium Members And Get More In-Depth Stock Guidance and Research
By Travis Hoium - Oct 28, 2017 at 10:32AM

Investors and analysts often conflate Tesla's (TSLA -0.47%) position in the auto and energy industries with Silicon Valley's position as a disruptive force in business. It's easy to talk about the way companies like Facebook (META 0.23%), Alphabet (GOOG -1.65%) (GOOGL -1.57%), Apple (AAPL -1.19%), and Amazon (AMZN -2.01%) have upended traditional businesses like retail, TV, music, and advertising and think Tesla will be able to do the same in the auto industry. That tech association is one reason Tesla has a valuation of $57 billion, more than most other major automakers despite its much smaller manufacturing output.

The problem is that Tesla isn't anything like traditional technology companies. It's a manufacturing company at its core, and its manufacturing prowess will determine whether it succeeds. Yet manufacturing is expensive and simply doesn't generate the returns tech companies are normally used to seeing.

Tesla's manufacturing business is very different from the asset-light business models of Facebook, Alphabet, Apple, and even Amazon. I'll start with the sheer amount of assets the company has on the balance sheet -- even before it's fully built the Gigafactory or completed its build-out of Model 3 manufacturing capacity. 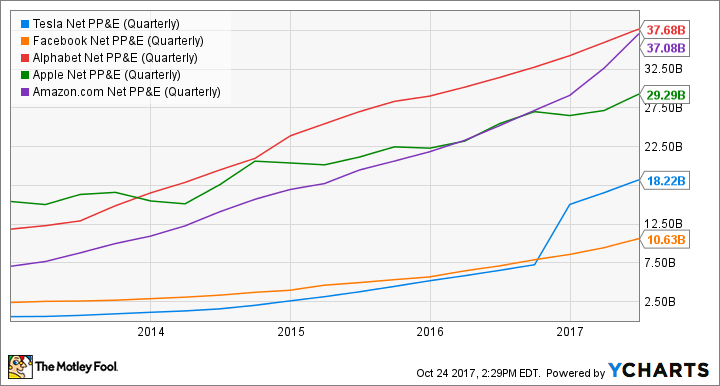 You can see that Tesla has spent nearly half as much on property, plants, and equipment (PP&E) as Amazon, the retail and cloud behemoth. Other tech companies have more PP&E, but they also generate many times more revenue than Tesla.

The goal of building PP&E is to generate a return on assets. The return on these assets for Tesla is troubling. You can see that Tesla is the only company with a negative return out of this group of companies. 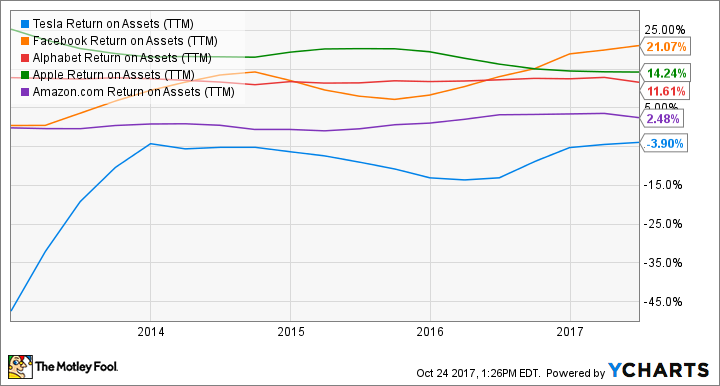 Another thing tech companies usually have in common is that each incremental dollar of revenue is very high margin. They have fixed expenses like engineers and other overhead, but as they grow they can generate high profits as revenue grows because they have high margins. Tesla is at the bottom end of the margins of these comparable tech companies. 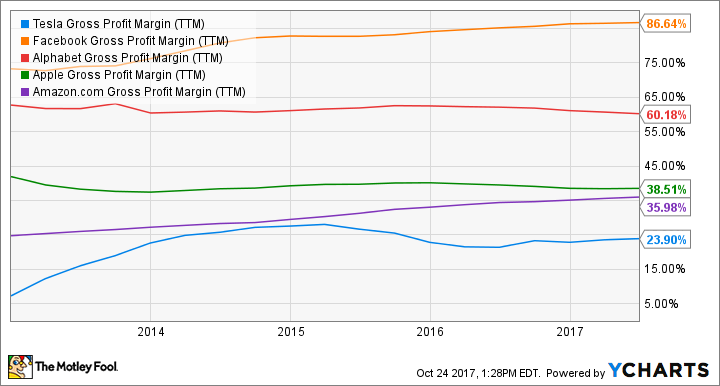 Tesla not only doesn't have high margins on incremental sales, it would have to invest billions more in factories if it grew beyond current capacity limitations.

There's no lock-in at Tesla

The other factor that's driven tech valuations through the roof is the lock-in tech companies have. Once everyone is using Facebook it's virtually impossible to start and grow another social network. Alphabet has made all other search engines irrelevant with its size and power, growing stronger and smarter simply because it's the biggest search engine in the world. Apple's platform includes the App Store, iTunes, iCloud, and other services that work seamlessly and make it easy to add more Apple devices and hard to begin using competing products. Add Amazon and tack on streaming TV, music, cloud, virtual assistance, and anything else it wants because it's the go-to place for e-commerce. The switching cost to leaving these platforms is very high, making their businesses very valuable.

Where is Tesla's lock-in? If I own a Tesla, does that make me more likely to buy another Tesla? Maybe, but that's likely because of brand loyalty more than product lock-in. Would I be more likely to buy a Tesla-branded solar system? Not necessarily, because a solar system that costs $10,000 or more would have its own set of pros and cons for buyers.

You can see where companies like Facebook, Alphabet, Apple, and Amazon have a recurring revenue stream once customers are locked into their platforms. There's not the same kind of powerful lock-in at Tesla, and if another automaker or solar company makes a product consumers find compelling, they could easily switch with little to no switching cost.

Tech companies get unusually high valuations in comparison to revenue and earnings in part because their models are asset light, high margin, and come with an extremely strong lock-in. Tesla doesn't have any of those things going for it, yet investors are pricing it like a tech stock. I think that makes the stock a high-risk investment because any misstep will be magnified given Tesla's need to invest billions in its manufacturing business. And Tesla doesn't have any history of showing that those investments will pay off for investors.