Strong dividends and business models built to last for the long run make these stocks great picks for investors with retirement in view.

Some say that 60 is the new 40. Maybe so, but your attitude toward investing can be quite different in your 60s than it was in your 40s. With retirement either on the horizon or already a reality, you'll want to put your money in stocks of solid businesses that provide steady income.

Three stocks that definitely meet those criteria are AbbVie (ABBV 0.42%), Brookfield Infrastructure Partners (BIP 1.86%), and IBM (IBM -0.05%). But what makes these stocks stand out above others for investors in their 60s? 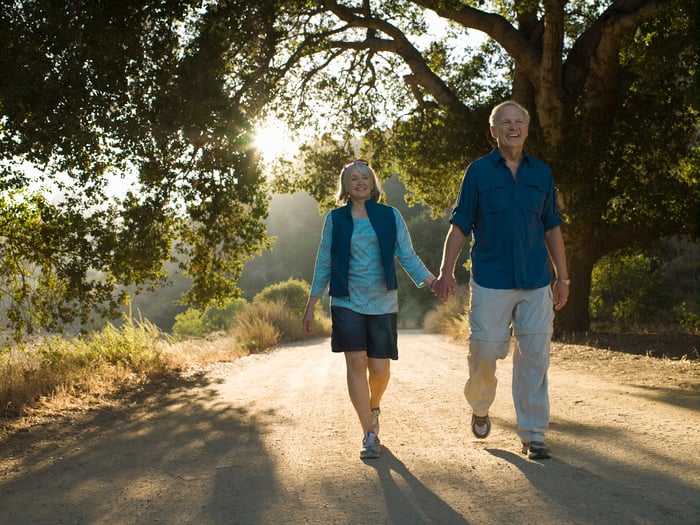 AbbVie provides the income that investors who are either retired or will be retired in the near future crave. The drugmaker's dividend yield is close to 3%. AbbVie has also increased its dividend for 46 consecutive years (counting the period where the company was part of Abbott Labs and its just-announced dividend hike for 2018).

Pharma stocks sometimes aren't the steadiest of investments, though, due to cycles where key drugs lose patent exclusivity. AbbVie faces competitive challenges for its top-selling autoimmune disease drug Humira. However, thanks to a recent deal with Amgen, the company appears to be in good position to protect Humira from biosimilar competition in the U.S. through January 2023. That's huge, since two-thirds of AbbVie's revenue from the drug comes from the U.S. market.

In the meantime, AbbVie lays claim to one of the fastest-growing cancer drugs around with Imbruvica. The company won Food and Drug Administration approval in August for pan-genotypic hepatitis C virus (HCV) drug Mavyret, just days after securing European approval for the drug. AbbVie also awaits regulatory approval for elagolix in treating endometriosis.

In addition to these drugs, AbbVie's pipeline ranks in the top three in the biopharmaceutical industry. Two of brightest stars in its pipeline are cancer drug Rova-T and autoimmune disease drug upadacitinib, both of which hold the potential to become megablockbusters. With strong current products and a deep pipeline, AbbVie should provide investors solid growth as well as a solid dividend.

Brookfield Infrastructure Partners' business model is about as steady as they come. Its assets include communications towers, oil and gas pipelines, ports, power lines, railways, and toll roads. In total, Brookfield owns 35 businesses, all of which are infrastructure-related and rake in fees from customers month after month.

With these stable sources of cash flow, Brookfield is able to pay out nice dividends. The company's yield currently stands north of 4%. Brookfield expects to increase its payout by 5% to 9% annually over the long term.

Is this type of growth really attainable? I think so. Brookfield makes nearly half of its total funds from operations (FFO) from its utilities segment. Most of its contracts have inflation increases built in, which the company thinks will cover roughly half of its projected growth.

Additional growth will likely stem from further acquisitions. Brookfield's financial position is strong enough to allow the company to be on the lookout for smart strategic deals. And, of course, it has that steady cash flow from existing assets that it can count on. All of this combines to make Brookfield Infrastructure Partners a great pick for investors in their 60s.

Some might have written off IBM as a relic from the past. The same thing happened years ago, only for IBM to adapt to technology changes and prove naysayers wrong. It looks like history just might repeat itself for the tech giant.

Although the company went through a painfully long stretch of quarters with year-over-year revenue declines, that streak should soon be over. IBM expects revenue to grow in the fourth quarter, boosted by the introduction of its new z14 mainframe computer.

IBM is already a leader in cloud computing. This cloud services business should continue to grow significantly. It's also part of what IBM refers to as its "strategic imperatives" businesses, along with analytics, mobile, security, and social. Because of its huge investments in research and development, IBM ranks among the leaders in several key technologies for the future, especially artificial intelligence and blockchain.

As a result of its lackluster financial performance over the past few years, IBM shares trade at only 11 times expected earnings. That's a bargain, in my view, especially considering that the company also pays out a dividend that currently yields nearly 3.8%. IBM won't be a go-go growth stock, but it's not a dinosaur that will go extinct. Instead, the company should continue adapting to new waves of technology, while rewarding shareholders each quarter with steady dividend -- just what investors in their 60s like.