Please ensure Javascript is enabled for purposes of website accessibility
Log In Help Join The Motley Fool
Free Article Join Over 1 Million Premium Members And Get More In-Depth Stock Guidance and Research
By Scott Levine - Oct 30, 2017 at 8:20AM

Beating earnings estimates by $0.02 isn't the only reason to consider the third quarter a success.

On the surface, Newmont Mining (NEM -3.74%), the largest gold miner by market cap, gave investors cause for celebration by beating analysts' earnings estimates. Evidently, though, the market wasn't impressed; shares dropped 2.6% the day after the company reported. Was the market's reaction warranted? Let's dig in deeper to find the salient details of the company's quarterly performance.

Investing in gold and collecting the green

Consistent with the company's gold price-linked dividend policy -- providing an annualized dividend of $0.30 per share when the average quarterly price of gold is between $1,250 and $1,299 per ounce -- Newmont declared a $0.075 dividend per share, representing a 50% year-over-year increase. 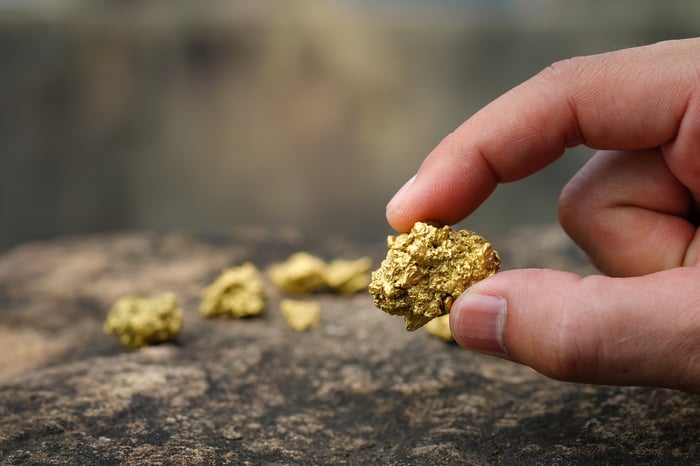 Shareholders need not worry that the dividend increase will jeopardize the company's financial health. In addition to generating $688 million in operational cash flow, the company ended the quarter with $2.97 billion in cash and cash equivalents. And Newmont's circumspect approach to debt should reassure investors even more: It ended the quarter with a net debt-to-adjusted EBITDA ratio of 0.4. 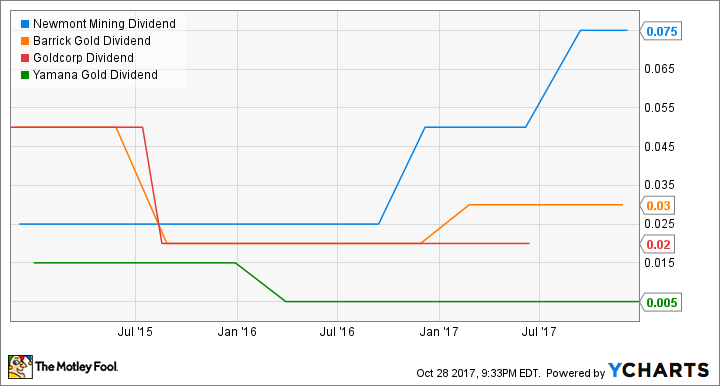 Distinguishing itself from those gold-mining peers that offer the most compelling dividend opportunities for gold miners, including Barrick Gold (GOLD -3.81%), Goldcorp (GG), and Yamana Gold (AUY -3.93%), Newmont has continuously raised its dividend while the others have ebbed and flowed.

Progress Down Under... and up above

Reassuring investors that the company's long-term growth strategy is intact, Newmont reported progress on numerous projects in its pipeline. In Australia, for example, the Tanami Expansion project, which is expected to maintain Tanami's annual gold production at 425,000 to 475,000 ounces for the first five years of production, was completed on time and budget. Exploring the possibility of further growth at the Australian mine, management reported that it's advancing Tanami Expansion 2 into feasibility studies.

Besides projects in Australia, the company made headway in developing projects north of the equator. In Nevada, at the Twin Creeks mine, the Twin Underground expansion project was completed ahead of schedule, mining first ore in August. Management expects commercial gold production to begin in mid-2018.

In addition, Newmont reported progress in South America. During the third quarter, management approved the Quecher Main project at the Yanacocha mine, where the life of mine is now extended to 2027. Gold production is expected to commence in early 2019, with commercial production beginning in Q4 2019.

Much ado about AISC

Apparently, the market was unimpressed with Newmont's achievements during the quarter. The culprit, in all likelihood, was the company's 2% year-over-year increase in all-in sustaining costs (AISC) per gold ounce -- from $925 in Q3 2016 to $943 in the recently completed quarter. Adding fuel to the bears' fire is that through the first nine months of fiscal 2017, Newmont reported AISC of $909 per gold ounce, compared with $879 per gold ounce for the same period last year. Though undesirable, the rise in AISC was certainly not egregious enough to eclipse the company's many successes.

Despite the escalation in costs, Newmont remains well on track to meet its fiscal 2017 AISC guidance per gold ounce of $900 to $950 -- a downward revision from its initial target of AISC between $940 and $1,000 per gold ounce. Furthermore, the narrowing margin seemed to have no effect on the company's cash flow, for Newmont generated $494 million in free cash flow during the third quarter -- a 107% year-over-year increase.

Turning in another successful quarter, Newmont continues to prove why it's one of the more compelling opportunities for gold-minded investors. In addition to rewarding shareholders today, with its gold-price-linked dividend, the company is ensuring future prosperity by developing the numerous projects in its pipeline. Looking ahead, investors should continue to monitor the execution of these projects and confirm that AISC remain in line with management's estimates.