TiVo, Cedar Fair, and Rent-A-Center command yields higher than 3% and are expected to grow earnings by more than 20% next year.

Healthy dividends and growth are the investing world's version of good looks and a great personality, but there are a few stocks out there that fit the bill. Companies offering chunky payouts are typically not fast growers, but there are a few that are in the process of growing their bottom lines at a hearty clip while also rewarding shareholders with steady trickles of income.

I've run a screen looking for stocks that expect to grow their earnings per share by at least 20% next year with yields north of 3%. It generated just a few dozen results, and to be fair, most of them are eyeing strong double-digit percentage earnings growth next year because they took a step back in 2017. One can argue that it's easy to take a big step up off of depressed results a year earlier, but it's still an encouraging sign that things are starting to come together. Let's take a look at three of the stocks -- TiVo (TIVO), Cedar Fair (FUN 0.11%), and Rent-A-Center (RCII -2.83%) -- with decent payouts where analysts see a return to strong earnings growth in 2018. 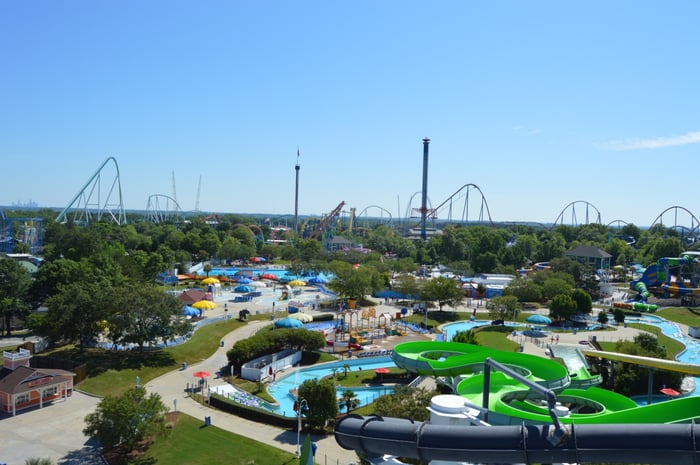 We no longer live in the era of linear television. Outside of live sports or perhaps some highly anticipated show finales we consume the video content we want on our terms. TiVo was ahead of that curve as the pioneer of the DVR (digital video recorder), and while we live in a world full of streaming services and set-top devices that may seem to make TiVo less necessary it's not as if the patent-rich originator is fading away like a mid-season cancellation on primetime TV.

If you're a rollercoaster lover and have never been to Cedar Fair's flagship Cedar Point amusement park in Ohio, you'll have to wait to make that happen. The coaster haven closed for the season over the weekend. The next season won't get under way until May of next year, but you can be a year-round investor in an operator of largely seasonal regional amusement parks.

Cedar Fair's 5.5% dividend is certainly compelling, and the company that also operates Knott's Berry Farm in California, Dorney Park in Pennsylvania, and several other regional thrill-generating attractions has an impressive collection of properties. Wall Street pros are modeling a 23% increase in earnings per share come 2018. There will be a change at the helm next year, but it's new CEO is a longtime executive at the company so the transition should be smooth.

Let's close this out with the riskiest of the three names. Rent-A-Center reports shortly after Monday's market close, so that in of itself may rock or skyrocket the stock. Unlike TiVo and Cedar Fair where revenue is growing this year and expected to grow next year, Rent-A-Center's top line is going the wrong way.

The company behind the namesake rent-to-own stores and its Acceptance Now sibling is seeing both concepts moving in different directions. September saw comps move lower at Rent-A-Center with delinquencies moving favorably, but it was the other way around on both fronts at Acceptance Now. Overall sales may be heading lower, but Rent-A-Center is experiencing an uptick in average monthly rates for all agreements and it's also seeing improvement in its inventory position at its domestic locations.

Analysts see profitability bouncing back in 2018 after a rough 2017, but the stock's 3.4% yield will help ease some of the volatility. Armed with the return of its former CEO this year and a potentially promising strategic plan that unveiled in April, Rent-A-Center's rewards may be a good match for its risks.