Please ensure Javascript is enabled for purposes of website accessibility
Free Article Join Over 1 Million Premium Members And Get More In-Depth Stock Guidance and Research
By Lou Whiteman - Oct 30, 2017 at 8:17AM

The F-35 will be a massive program for the defense contractor -- so big that it's the only thing moving the needle at Lockheed these days.

Lockheed Martin ( LMT 0.99% ) delivered an unpleasant third-quarter surprise, missing on both sales and profit estimates. Much of the issue appears to be timing, and after dropping 2.36% on Tuesday following the announcement, the shares were green a day later. But if nothing else, the results are a reminder of the risks associated with a company increasingly reliant on one single, massive program, no matter how promising that program is. 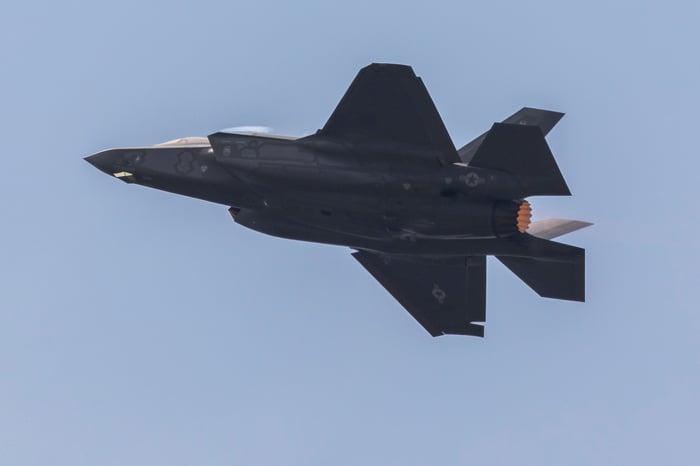 Lockheed generated income of $939 million, or $3.24 per share, on sales of $12.2 billion, falling short of consensus expectations of $3.26 per share in earnings on $12.81 billion in revenue. The company did increase its full-year 2017 sales forecast to $51.2 billion, from $50 billion, and said it ended the quarter with a record $104 billion backlog of future business.

The company blamed the quarterly shortfall on timing issues relating to its F-35 Lightning II fighter aircraft program. The F-35 is a fixed-price contract that books revenue as costs are incurred. Lockheed said some of its suppliers were delayed in billing costs that the company expected to see come in during the third quarter, pushing that expected revenue into the last three months of the year. On a call with investors, CFO Bruce L. Tanner said that shortfall "will be more than made up for" during the fourth quarter.

The F-35 is a massive program for Lockheed Martin, designed to replace fighters for the U.S. Air Force, Navy, and Marine Corps as well as serve nearly a dozen allied countries. The plane is expected to remain in service for most of the rest of the century, and between new orders, replacement parts, service, and upgrades, it is expected to generate more than $1 trillion in revenue for Lockheed Martin during its lifetime. Analysts estimate that earnings per share at Lockheed could grow by upwards of 50% by 2020 as F-35 order delivery ramps up.

Should the F-35 prove to be as successful as analysts and the company expect, it figures to dominate the Lockheed Martin portfolio in the years to come. The F-35 accounted for about 23% of 2016 revenue at Lockheed, a figure that is expected to grow. Increasingly, a bet on Lockheed Martin is a bet on the F-35.

Lockheed Martin has attempted to diversify, most notably in 2015 when it bought helicopter-maker Sikorsky from United Technologies for $9 billion. The company also has a large presence in missile systems and space, as well as additional aircraft. But despite those efforts, Lockheed is not predicting a lot of growth outside of airplane manufacturing through 2018.

The company expects its aeronautics division to grow sales in the high-single-digit range in 2018, driven largely by the F-35 and also potentially by continued interest in older planes. Elsewhere in the portfolio, growth could be hard to come by; Tanner predicted the missiles division would generate "slight growth" in 2018 compared to 2017, with rotary and mission systems business flat, and space systems down mid-single digits.

Stuck in a holding pattern

Lockheed shares are in an odd spot right now. Even after the post-earning pullback, the stock still trades at a historically rich 1.84 times sales and 25.1 times trailing earnings. Investors seemingly are willing to look past a short-term lull in favor of focusing on expected jumps in Pentagon spending in the years to come and Lockheed's ability to benefit from those gains.

That's a logical conclusion, and there is no reason to panic-sell shares following the miss. But given how far this stock has already climbed -- shares have nearly doubled in value in the last three years -- and the corresponding drop in dividend yield from 4.75% in early 2013 to a current 2.31%, the outlook offers no good reason to jump in now. Even after the quarterly miss, the company's shares are no bargain.