Please ensure Javascript is enabled for purposes of website accessibility
Log In Help Join The Motley Fool
Free Article Join Over 1 Million Premium Members And Get More In-Depth Stock Guidance and Research
By Brian Feroldi - Oct 30, 2017 at 9:33AM

Not all diabetes stocks are created equally.

Diabetes is a chronic condition that occurs when the body loses its ability to properly metabolize sugar. Without treatment, people with diabetes end up with too much sugar flowing through their bloodstream, which can lead to a wide range of health problems.

More than 30 million Americans already have diabetes, and another 84 million are at risk of developing the disease. Given these massive numbers, perhaps it isn't shocking to learn that diabetes costs the U.S. healthcare system more than $245 billion annually.

A market opportunity that large has attracted the attention of plenty of publicly traded companies:

But which of these diabetes stocks is the best bet for investors heading into 2018? Here are my three favorites. 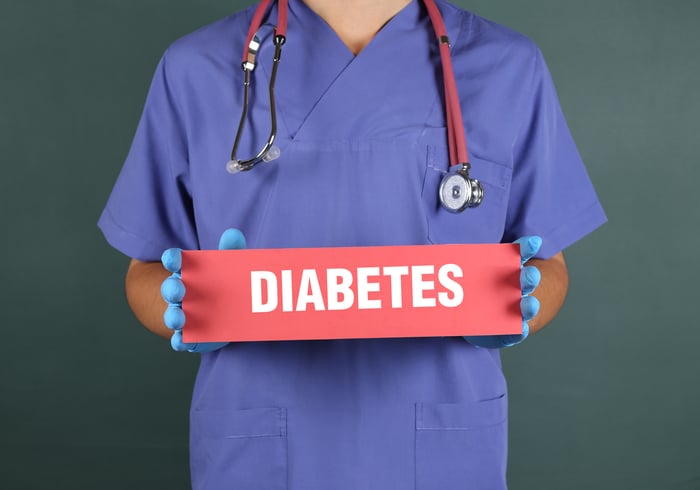 A big competitor throws in the towel

Roughly 3 million Americans require artificial insulin to keep their blood sugar levels in a healthy range. While the majority of them rely on pens or needles for insulin delivery, another option is to use an insulin pump.

For decades, insulin pump therapy required users to wear a pager-like device and tubing all day, every day, but a decade ago Insulet introduced the first fully programmable patch pump to market. Called the OmniPod, this waterproof device sits directly on the skin and automatically inserts a small cannula into the body. Insulin dosage instructions are transmitted to the device by using a wireless handheld controller.

Understandably, the tube-free nature of this product become highly appealing to patients who were resistant to the idea of using a pump. As a result, Insulet has been stealing market share away from industry leader Medtronic for years. Revenue has grown at a brisk pace since the company's IPO, and Insulet's stock has crushed the market.

Is it too late to get in? This Fool doesn't think so. One reason for my bullishness is that Johnson & Johnson recently decided to exit the insulin-pump market altogether. Although J&J is steering the 90,000 stranded patients towards Medtronic, many patients will probably view the OmniPod as an attractive alternative to their tubed pump. This should make it easier for Insulet to hit CEO Patrick Sullivan's target of $1 billion in revenue by 2021, about triple what it pulled in last year. If so, then this stock stands a good chance of continuing to outperform from here.

Dexcom is a diabetes company that I've long admired. The company is a leading manufacturer of continuous glucose monitoring (CGM) system that enables people with diabetes to see their blood glucose levels in nearly real time. Since high or low blood glucose readings can require immediate medical attention, being able to constantly track changes in glucose levels can allow a patient to take action before things get out of hand.

Given the huge consumer appeal of adoption of a CGM system, Dexcom's growth rate over the past decade has been nothing short of extraordinary. 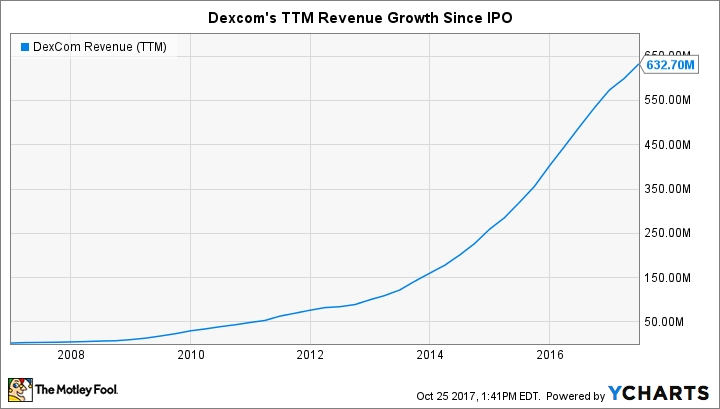 Wall Street caught on to this growth story years ago and bid up shares to an extreme valuation. That fact largely kept me on the sidelines. However, Dexcom's stock took a nose-dive in late 2017, after the FDA approved Abbott Laboratories' FreeStyle Libre Flash Glucose Monitoring System. The Libre has a few advantages that give it strong consumer appeal. That caused traders to worry that Dexcom's glory days have finally come to an end.

While I'm mindful of Libre's benefits, I don't think this is a winner-take-all market. Only a small fraction of patients who use insulin are on a CGM today, so there should be ample room for Abbott, Dexcom, and other CGM systems to succeed. That's especially true now that Medicare is starting to cover CGM systems for the first time. With Dexcom's stock finally trading at a reasonable valuation, I think this stock stands a great chance of bouncing back in 2018.

Novo Nordisk has long been the top dog in insulin therapy. That fact has taken long-term investors on a wildly profitable ride. However, Novo's stock was thrashed in late 2016, after management cut its long-term profit growth targets in half. The company stated that U.S. insurers were demanding lower prices on its legacy insulin products. That pressure forced Novo to give in if it wanted to keep its market share.

However, Novo's stock came roaring back to life in 2017 after the company posted upbeat earnings for several quarters in a row. The results were largely driven by strong growth in the company's next-generation drugs, such as Victoza, Tresiba, Xultophy, and Ryzodeg. When combined with more disciplined expense control and label expansion claims, Novo's profit growth hasn't had any trouble exceeding the lowered hurdle rate.

Looking ahead, Novo's next-generation drugs should continue to power overall revenue higher, even in the face of continued pricing pressure on its legacy business. When combined with new drug launches and the general rise in diabetes diagnosis, this Fool thinks Novo's rebound is easily sustainable. Adding in a dividend yield of 2.4% is just icing on the cake.