Looking for a few great stocks to buy this month? Here are five top opportunities for you to consider.

Summer is officially in the rearview mirror. That means the air is cooling down, the leaves are starting to change, and Halloween is right around the corner. How do we Fools celebrate the changing of the seasons? By finding great stocks to buy, of course! 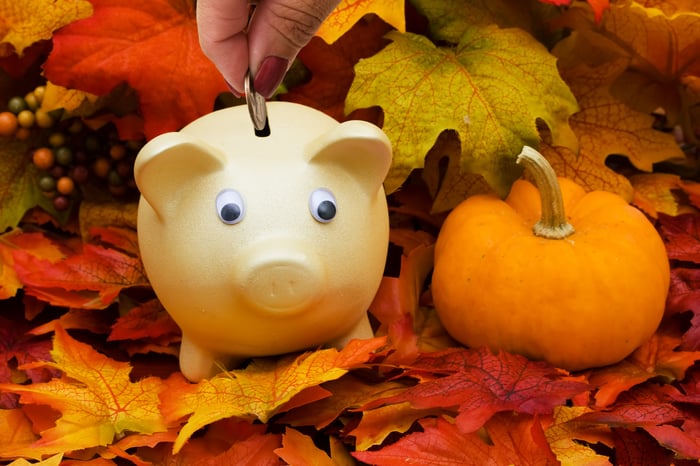 Cory Renauer (Rigel Pharmaceuticals): My stock pick this month has been under pressure thanks to a couple of issues, but I don't think either will stop this biotech from advancing its first drug from clinical trials to pharmacy shelves early next year.

Tavalisse, formerly fostamatinib, is an experimental therapy with a troubled past. Back in 2013, Rigel nearly imploded when the drug failed to show a clinical benefit for patients with rheumatoid arthritis. Success in the first of two pivotal trials for a rare disease called immune thrombocytopenic purpura (ITP) lifted the stock last year, only to come crashing down again after a single patient in the placebo group of the second trial rendered the study a statistical failure.

Rigel's lead candidate missed the mark in arthritis, but ITP is a different disease caused by the unwarranted destruction of the platelets that allow blood to clot properly. As for the second pivotal trial that failed due to a technicality, combined results from both pivotal trials showed a clear clinical benefit, with 29 of 101 ITP patients given the drug achieving higher platelet levels versus just one of 49 given a placebo.

Although the FDA generally doesn't accept combined trial results, a recent announcement that the Agency won't convene an independent advisory committee to discuss the mixed data suggest Rigel's candidate has a much better chance of earning an approval than the stock price suggests right now.

If approved, fostamatinib could generate around $350 million in sales each year at its peak, but Rigel's market cap is just $419 million at recent prices. Biotech stocks tend to trade at mid single-digit multiples of annual sales, which means an approval decision in the months ahead could send the stock rocketing higher.

Tim Green (Hanesbrands): With the market at all-time highs as we enter October, finding solid value stocks is hard. There are plenty of cheap-looking stocks, but those will burn you more often than not. Good companies trading for less than they're truly worth are in short supply.

Thankfully, there are still some good options for investors unwilling to pay sky-high prices. Hanesbrands, an apparel manufacturer known best for its innerwear, has seen its stock beaten down since peaking in 2015. Concerns about the health of brick-and-mortar retailers, where Hanesbrands generates the vast majority of its sales, have been weighing on the stock.

Hanesbrands' results in recent quarters have been mixed, with declines in innerwear sales offset by growth in activewear and international sales. The company expects organic sales to be up as much as 2% this year, which isn't as sluggish as it sounds given the current retail environment. Analysts expect adjusted earnings per share of $1.99 in 2017, putting the stock just shy of 12.5 times that number. For comparison, the S&P 500 trades for about 25 times trailing-12-month earnings.

Hanesbrands is not an exciting company, and its dependence on the megaretailers does introduce some concentration risk. But the price looks right for this overlooked apparel company.

One of the world's greatest companies at a reasonable price

Chuck Saletta (Walt Disney): Walt Disney is well known for Mickey Mouse, a string of worldwide amusement parks, and top-tier television and movie properties like ESPN, ABC, Pixar, Marvel Studios, and Star Wars. Few companies have anywhere near the reputation that Walt Disney does of successfully and consistently separating people from their money while those people thoroughly enjoy the experience.

While Hurricane Irma temporarily shut down Disney World, and there are lingering questions about the long term growth prospects of ESPN, the overall company looks solid. Despite those well-known challenges, Walt Disney as a whole is expected to be able to increase earnings by around 7.5% annualized over the next five years. Bargain prices on quality companies rarely last, which makes Walt Disney look like a potentially compelling investment this October.

Even if its shares don't quickly rebound, Walt Disney sports a 1.6% dividend yield -- which is better than the yield on 3-year Treasury bonds at the moment. Even better, unlike those bonds, Walt Disney has been able to increase its dividends for the past several years. With a payout ratio of only around 28%, Walt Disney likely has room to continue increasing that dividend.

A beatdown has created a bargain

Jason Hall (Tile Shop Holdings): Since reaching its 2017 peak in June, shares of Tile Shop are down 61% at this writing, with the vast majority of that huge drop happening over the past week. The downhill roll started on September 27 when Piper Jaffray downgraded the stock over near-term inventory and competitive concerns, sending shares down 17% on the day, and culminated with the company's preliminary third-quarter earnings release on October 2, which indicated that Jaffray's analysts were right.

However, I'm of the strong opinion that this huge beatdown is overdone (though the stock could keep falling in the short term) and, more importantly, that Tile Shop's current problems will prove to be short term in nature.

The company said its third-quarter results are likely to show 7% sales growth overall, and 1% comps (sales at stores open more than one year) growth, similar to the second quarter's results, and that gross margins will take a big hit since the company had to more extensively discount in an increasingly competitive environment.

Here's the catch: The company says this is as much a mix problem as a pricing one, and that it is bringing in more entry-level products to meet customer demand. This should stabilize margins and drive sales higher, resulting in strong profit growth in future quarters. It could take another quarter for the results to pay off, but I think investors who buy shares after the recent drubbing will be glad they did in a few years' time.

This high-growth gem is finally trading at a reasonable price

Brian Feroldi (Dexcom): I've been an admirer of the diabetes darling Dexcom for years. Dexcom is a leading provider of continuous glucose monitoring system that allows people with diabetes to track their blood sugar levels in real time. Given the company's razor-and-blades business model and huge addressable market opportunity, Dexcom's top-line growth has been nothing short of amazing. In turn, the stock has been a home run for early investors. 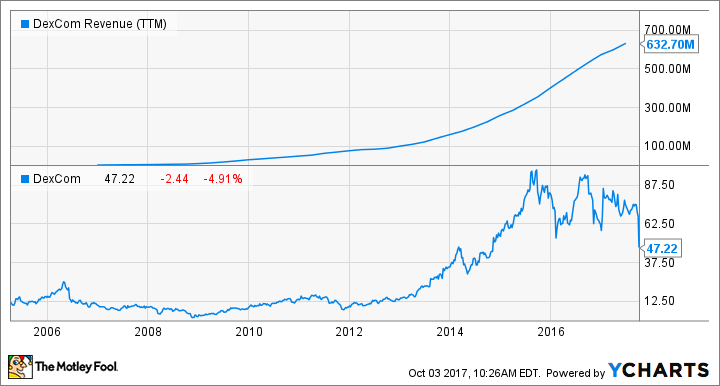 Despite my admiration for the company, I've never been comfortable with the stock's sky-high valuation. However, Dexcom's stock was clobbered last week after the FDA approved Abbott Laboratories's (ABT 0.20%) FreeStyle Libre Flash Glucose Monitoring System. Since Libre users do not have to prick their finger for calibration, Wall Street freaked out over the belief that Dexcom's growth days were over.

While the Libre looks like a very cool device, I'm not nearly as bearish as Wall Street for three main reasons.

First, Abbott's Libre system requires users to wave a piece of hardware over their sensor to get a reading. By contrast, Dexcom's sensors communicate directly with an iPhone, Apple watch, or Android phone. That eliminates an extra piece of hardware from the picture. Dexcom's system also allows data to be shared over the web, which is a highly attractive feature for parents and caregivers.

Second, Dexcom's amazing revenue growth up until now has come without any coverage from Medicare. The company finally won Medicare reimbursement just a few months ago, so it just recently gained access to an enormous market opportunity.

Finally, there are 3 million intensively managed insulin users in the U.S. alone. By contrast, only a few hundred thousand patients are actively using continuous glucose monitoring systems. That means there is plenty of room for multiple winners.

These factors make me believe Dexcom will still be able to put up big growth numbers in the years ahead. With shares currently trading at a more reasonable valuation -- about 6 times sales, which is near a 10-year low -- I think it that right now is a great time to buy into this growth story.