Shares of Pitney Bowes (NYSE:PBI) were bowing to the pressure of a disappointing earnings release this morning. (Yes, again.) After the postal services company reported adjusted earnings of $0.33 per share (Wall Street had anticipated $0.42) despite expectation-beating revenue in the fiscal third quarter, its shares were trading down 17.8% as of 11:50 a.m. EDT. 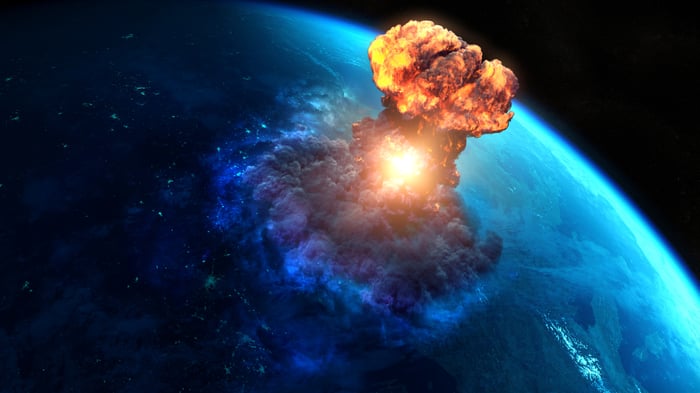 The news gets worse. When calculated according to GAAP accounting standards, Pitney Bowes earned only $0.31 per share last quarter, down nearly 12% year over year. Sales for the quarter came in at 842.8 million, up a fraction of a percent and ahead of analyst estimates. Regardless, profit margins were exceptionally weak, falling 230 basis points to just 8.9% operating profit margin.

Additionally, while raising its revenue guidance for the year, Pitney Bowes warned that its pro forma profits and free cash flow estimates are going to have to come down.

As of today, Pitney Bowes projects that fiscal 2017 sales will be up 3% to 5% over 2016 levels, implying full-year sales of perhaps $3.5 billion. Pro forma profits, however, will be about 19% less than previously projected, and will range between $1.38 and $1.46 per share. Free cash flow for the year will range between $350 million and $380 million, or about $50 million less than previously anticipated.

Perhaps attempting to alleviate investor panic over the results, Pitney Bowes management told investors that it is now reviewing any "strategic alternatives" available to potentially "enhance shareholder value," which is usually code for "selling the company."

Investors aren't grasping at that straw, however, and Pitney Bowes shares are still tumbling.