The company's management team, which has been tinkering with growth initiatives to push comps higher, provided tangible evidence during the company's October 26th earnings conference call that revenue might rebound in the coming quarters. Below, let's review a few key takeaways from discussion of these initiatives, as well as one bit of financial housekeeping current shareholders should be aware of.

Phase I of our plan focuses on reclaiming our superiority in the morning, which is our dominant daypart, with 60% of sales taking place before 11:00 a.m. We're encouraged by our morning sales performance, which has comped positively and sequentially increased on a comp basis each quarter in 2017. -- David Hoffmann, President of Dunkin' Donuts U.S. and Canada

While quick-service restaurants are always devising ways to juice traffic during daily slack periods, for a select few, like Dunkin' Brands, McDonald's Corporation (NYSE:MCD), and global coffee chain Starbucks Corporation (NASDAQ:SBUX), the morning daypart is all-important; a period in which the lion's share of revenue and profits are won.

In recent years, Dunkin' perhaps expended too much time and energy in trying to bump up afternoon and evening traffic. Reasserting the importance of breakfast plays to the company's strengths and should positively affect the effort to raise comps to a faster growth rate (i.e., mid to high single digits) over the next few years.

Incidentally, the plan David Hoffman refers to above is management's "blueprint for growth," which focuses on menu innovation, order convenience through the company's digital "Perks" platform, menu simplification and restaurant redesign, and the increasing of consumer packaged goods sales.

The 2 for $2 Egg & Cheese Wake-Up Wrap offer drove record breakfast sandwich sales in Q3, as we sold over 1,000 breakfast sandwiches per restaurant, per week during the quarter, another milestone for us. In fact, the average ticket for the offer was greater than $7 versus our average ticket of about $5, demonstrating the power of our value strategy of having a food offer to drive beverage attachment. -- David Hoffmann, President of Dunkin' Donuts U.S. and Canada

Within the drive to improve breakfast traffic, Dunkin' has recently experimented with the type of value offerings McDonald's has successfully implemented during the last two years. While it's early to draw definitive conclusions, one thing investors should notice is the higher than normal average ticket attached to the $2 value promotion. Dunkin's best margins reside in its drink offerings; that's why you'll so often hear management repeat the mantra that the company aims to be "beverage-led." The average $7 ticket tied to the wraps value deal indicates that specialty drinks are likely being added to those orders and that the campaign is adding, not subtracting, from the company's margin. 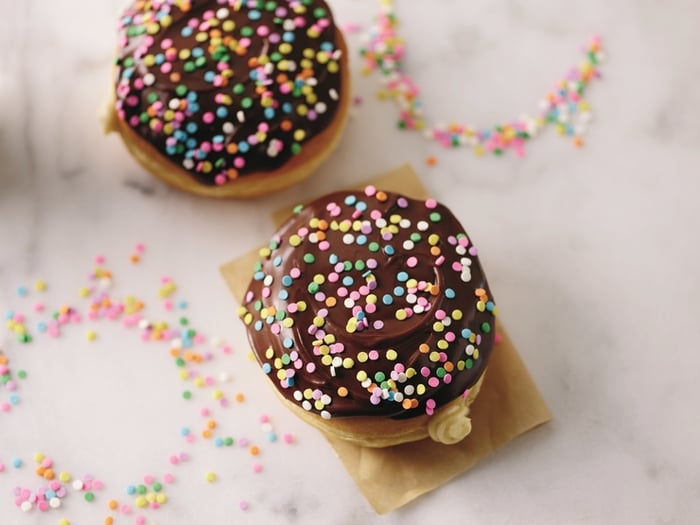 I was recently asked by an investor if digital is becoming so ubiquitous that it will no longer be a competitive advantage. While everyone has access to new technologies, if the companies like Dunkin' that use it to forge an even closer relationship with their guests, the way we're doing it with our Perks loyalty program, then we'll have the competitive advantage. -- CEO Nigel Travis

During last week's earnings call, executives relayed some impressive statistics on the Perks platform. Perks has grown its membership by 40% through the first three quarters of 2017 versus the same period last year, for a total base of 7.5 million members. Purchases tied to Perks totaled a significant 11% of U.S. and Canada Dunkin' Donuts sales in the third quarter.

CEO Nigel Travis isn't afraid to tell investors that he's a little obsessed over one-to-one marketing opportunities, which the digital affinity platform makes possible. And I believe the ability to incentivize individual customer behavior through the Perks app is one of Dunkin' Brands' understated strengths. At 11% of sales, the platform has already reached critical mass, and it should play a central role in bumping up those U.S. comps over the next several quarters.

Packaged goods sales are ramping up

And according to IRI data, retail sales of our ready-to-drink bottled Iced Coffee exceeded $100 million within the first 9 months of launching, which is an impressive feat considering that there are very few products that achieved $50 million in retail sales in their first year. And then the trailing 12 months, our total portfolio of consumer packaged goods has generated more than $800 million in retail sales. -- David Hoffmann, President of Dunkin' Donuts U.S. and Canada

Dunkin' Brands was a little late to the consumer packaged goods (CPG) game. But over the last two years, the company has increased its branded K-cup revenue, boosted packaged coffee sales within restaurants, and placed ready-to-drink iced coffee on store shelves through its distribution deal with Coca-Cola.

A portion of Dunkin's CPG revenue is split with franchisees, so it's difficult to see the true impact of this channel on the company's bottom line. But to give you some idea of the growth, Dunkin's "Other Revenue" income statement line item, where a significant bit of CPG sales are recorded, has nearly doubled since 2014, and it represented 6.5% of total company revenue in the third quarter.

Given our successful debt refinancing, look for more share repurchases

This week, we closed on the financing of $1.4 billion of new securitization debt ... The transaction was heavily oversubscribed and provided us with the lowest 7- and 10-year rates ever achieved for a restaurant securitization. The proceeds were used to repay approximately $731 million of securitization debt from our 2015 deal. -- Kate Jaspon, CFO

Dunkin' Brand's October debt refinancing resulted in $669 million in proceeds (before fees) beyond the $731 million needed to retire the senior secured notes CFO Jaspon refers to above. Management has already announced that it's carving out $100 million of excess net proceeds for capital investment and growth initiatives in the Dunkin' U.S. business over the next couple of years.

Since the refinancing occurred after quarter end, we won't see the exact transaction costs and excess proceeds available until next quarter's balance sheet is released. However, last week, the company's board authorized a new, two-year share repurchase program that caps out at $650 million.

Tellingly, during the call, Jaspon also remarked that the company's "overall philosophy of returning capital to shareholders has not changed." Shareholders can expect a significant share repurchase in the near future -- potentially in the fourth quarter. In a similar refinancing in 2015, Dunkin' plowed excess debt proceeds into its own common stock and repurchased $625 million of "DNKN" shares. If you're a fan of stock buybacks, you'll love what appears to be a major repurchase in the offing.