In the most recent example, the stock jumped 20% last week after B-Dubs announced progress at protecting itself from soaring wing prices. CEO Sally Smith, in what could be her last quarterly conference call before retiring, said she was optimistic about the company's plans to get sales and profit trends back into positive territory. Here are a few key quotes from the chat Smith and her team had with Wall Street analysts. 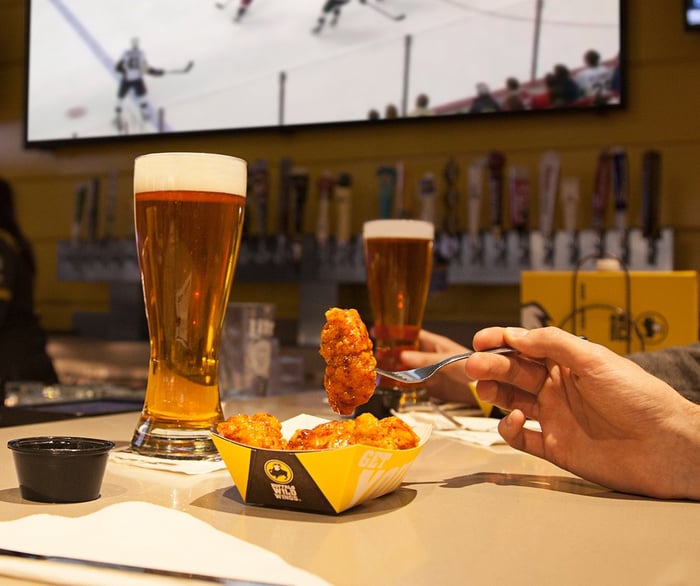 Backing out of an expensive promotion

We made significant progress on improving our cost to good sold ... in an inflationary commodity environment for traditional chicken wings.
-- Chief Financial Officer Alex Ware

Back in late June, executives predicted that a switch to boneless wings in their popular half-price wing promotion would give them protection from spikes in traditional wing costs. They were right. The change helped push costs down to 30.8% of sales this quarter from 32.4% in the prior quarter.

Importantly, the shift didn't hurt sales growth by much as comparable-store sales worsened to a 2.3% dip from 1.2% in the prior quarter. Yes, restaurant traffic fell following the move. But most of that decline came from small, low-margin takeout checks, executives said. B-Dubs' restaurant-level profitability jumped to 16.6% of sales from 13.8%.

As we seek to gain momentum on improving our same store sales trends, it's important to [remember] that it's all about the fundamentals in the restaurant industry.
-- Smith

Comps have declined in six of the past seven quarters. Management's plan to turn things around involves going back to the basics. The main initiative focuses on improving the guest experience through delivering higher-quality service.

B-Dubs is putting store managers and other employees through a major training program that executives hope will reduce turnover and contribute to a friendlier atmosphere that meets guests' demands for speed, convenience, quality, and cleanliness. They'll be judging the success of this program by following customer-satisfaction levels and will give investors regular updates on those results over the coming quarters.

Executives see an improving cost picture developing due to cost cuts and a switch away from that expensive promotion. Overall food expenses are projected to dip again in the fourth quarter even though chicken wing costs are rising a bit faster than they had projected. As a result, their guidance now predicts earnings of $5 per share, compared to the $4.75 per share they forecast in late July.

B-Dubs' updated outlook still calls for sales to fall by about 1.5% for the full year. That would qualify as a modest win given the hit that its restaurants are taking from the shift in its wing promotion. It would also mark a small improvement over last year's 2.4% decrease. Executives then should shift their focus toward doing what they can to make sure that 2018 doesn't turn into the chain's third straight year of declining sales.