Few industry watchers expected much out of GED-0301, yet its failure in a phase 3 study, plus anemic sales growth for one of its most important drugs, caused Celgene Corp. (NASDAQ:CELG) shares to lose 30.8% of their value in October, according to S&P Global Market Intelligence.

On October 19, Celgene pulled the plug on two Crohn's disease studies evaluating GED-0301 after independent monitors determined GED-0301 wouldn't be able to outperform the control arm of its study. 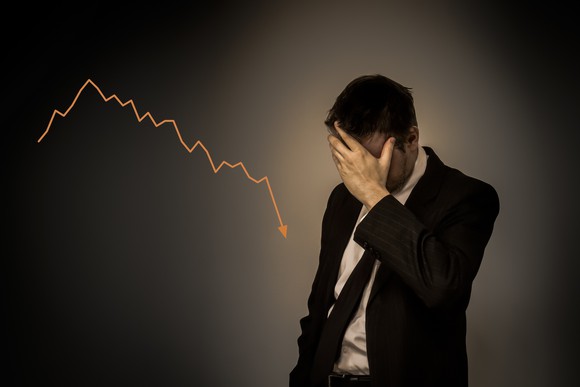 The disappointment caused a sharp drop-off in Celgene's shares because Celgene had paid more than $700 million upfront for the drug, and it will now be forced to take up to $500 million in writedowns this quarter alone.

On October 26, Celgene reported additional bad news when it released its third-quarter financials. Weaker-than-anticipated growth for its psoriasis drug Otezla resulted in management reducing the high end of its sales guidance for the year.

The bad news overshadowed a few bright spots for the company.

Management expects to file ozanimod for Food and Drug Administration (FDA) approval by year's end, and if approved, it has a shot at blockbuster status because of best-in-class safety. Celgene also reported encouraging phase 2 results for ozanimod in Crohn's disease in October, and plans to begin a phase 3 trial in the indication soon.

Catalysts are also approaching that could reignite investor interest. Expectations are low for data from GED-0301 in ulcerative colitis this quarter, but two of its collaboration partners will present updated results for blood cancer drugs in December. An abstract for Juno Therapeutics (NASDAQ:JUNO) and Celgene's JCAR017 suggests best-in-class efficacy and safety in diffuse large B-cell lymphoma. Additionally, bluebird bio plans to update investors on its experimental CAR-T for use in multiple myeloma.

Undeniably, question marks remain. The psoriasis market is more competitive than ever, and that could continue crimping demand for Otezla. There's also been pushback against Celgene for price increases on its best-selling drug, Revlimid.

Nevertheless, Celgene has a long-term track record of success, a flurry of research and development activity that could still pan out, and top-notch financials that give it financial wiggle room. Overall, I think Celgene's a stock to buy on sale for the long haul.