It has been less than a month since aerospace giant Boeing (NYSE:BA) announced plans to purchase tiny, cutting-edge aerospace company Aurora Flight Sciences for an undisclosed sum. Today, we still don't know how much Boeing plans to pay for Aurora -- but we already have our first indication of how Boeing might profit from the purchase.

On Oct. 24, the National Aeronautics and Space Administration (NASA) announced it had awarded Aurora Flight Sciences a contract "to perform a comprehensive evaluation of the Single-aisle Turboelectric Aircraft with Aft Boundary Layer propulsion (STARC-ABL) aircraft concept." If successful, this new airplane design could one day result in the creation of a commercial airliner boasting as much as a 50% increase in fuel efficiency.

And Boeing will own it. 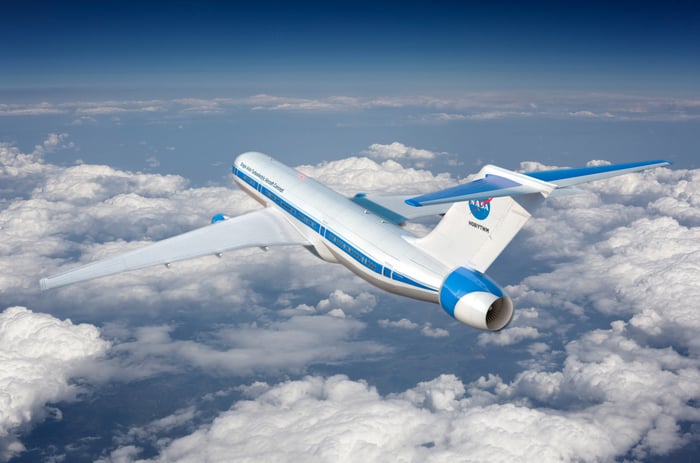 What is STARC-ABL, and how will it deliver such a dramatic increase in fuel efficiency? In line with industry's fascination with all things "hybrid" these days, STARC-ABL begins with conventional, under-the-wing gas turbine engines. It then boosts these engines' performance by adding a "ducted, Boundary Layer Ingesting (BLI) tailcone propulsor driven by a turboelectric propulsion system." (That's the funny-looking fan attached to the rump of the artist's concept above.)

STARC-ABL also falls right in line with a similar project that Aurora has been working on, the "D8" commercial airliner prototype. Sized similarly to a Boeing 737 narrowbody airliner, D8 aims to yield a commercial airliner seating between 150 and 180 passengers. Like STARC-ABL, D8 would be built from composite materials and feature boundary layer ingestion and "high levels of autonomy." (Electric drives and autonomy are Aurora's two fortes in the aerospace space.) Aurora has been developing D8 with the use of internal funding, plus financial support from the Federal Aviation Administration and NASA.

From composite materials to geared turbofans to "winglets," many of the most recent innovations in airplane design have aimed to boost airplanes' fuel efficiency -- and it's no surprise. Depending on the price of oil, on any given day fuel costs can be either an airline's biggest single expense or its second biggest.

Whenever Boeing is able to claim a new, significant increase in fuel efficiency, it gains an invaluable tool for marketing its aircraft to airlines -- and a great way to distinguish its aircraft from similar models sold by competing airplane makers (i.e., Airbus (OTC:EADSY)). If Aurora succeeds in developing a prototype aircraft offering a 50% increase in fuel efficiency over competing planes from Airbus, this could secure Boeing's supremacy over its archrival for decades to come.

Worst case, just the threat of making such a breakthrough in fuel efficiency could force Boeing's rival to invest billions of dollars in developing its own version of tail-mounted hybrid electric drives. And with Airbus currently limping along on negative operating profit margins, these are investments Boeing's rival can ill afford to make.

For this reason if no other, Boeing's decision to buy Aurora Flight Sciences looks like a savvy business move to me. Heads, Boeing spends a little money to make a big advance in airplane fuel efficiency; tails, it gives its archrival one more headache to worry about.