The bank industry is struggling through the same travails as the retail industry. Just like e-commerce is causing retailers to shutter stores, the growth of digital banking is reducing the need for bank branches.

Bank of America (NYSE:BAC) offers a case in point. Since the beginning of 2009, the nation's second-biggest bank has closed 1,634 branches -- one out of every four that it started with. In the latest quarter alone (the three months ended Sept. 30), it closed 31 locations.

The ability of Bank of America to close branches at this pace without alienating customers has been made possible by the proliferation of online and digital banking. Bank of America has 23.6 million active mobile customers, with 21% of its deposit transactions now happening via its mobile banking app. That equates to the work of approximately 1,100 branches, as the bank's chief financial officer noted on the latest earnings call.

But while Bank of America and other large banks are aggressively consolidating their branch networks, the industry at large is still only at the very beginning of this trend. 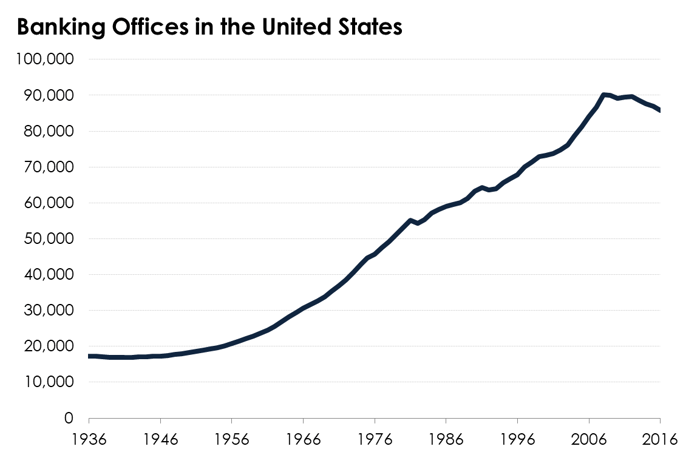 As you can see in the chart above, the total number of banking offices in the United States (banks plus their branches) topped out at just over 90,000 in 2008, the same year as the financial crisis. Since then, the total number has dropped by only 5%.

This doesn't mean that the bank branch is safe. The point instead is that we're still at the very beginning of the downward trend.