That's how much you'd have if you'd invested $10,000 in Alnylam stock just one year ago.

That's how much a $10,000 investment in Acadia Pharmaceuticals five years ago would be worth today.

With potential returns like that, it's no wonder the biotechnology sector holds unparalleled allure. 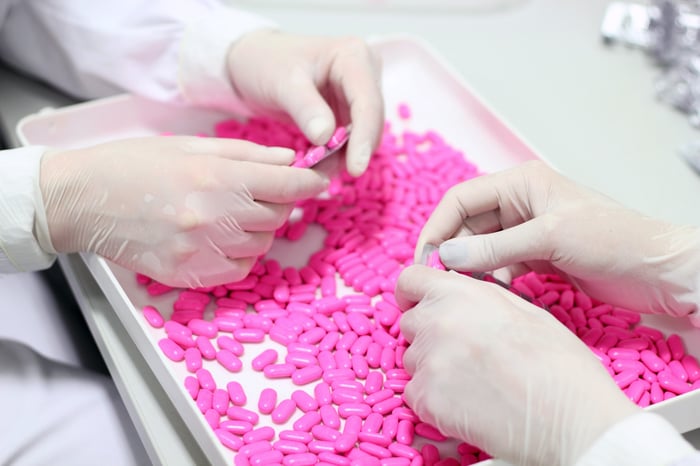 Biotech is a sector riddled with heartbreaking failures only to be outdone in drama by unexpected success sending stocks soaring in a single day. This unpredictable nature scares many investors off -- but with a few basic strategies for investing in biotech and an understanding of the trade-off between risk and reward, you can better understand when to be fearful and when to be greedy.

Dip your toes in with an ETF

The easiest and least risky way to get exposure to drugmakers large and small is through an ETF. Exchange-traded funds are baskets of stocks that you can buy under a single ticker symbol. My favorite biotech ETF is the iShares Nasdaq Biotechnology ETF (NASDAQ:IBB), which has 159 different biotech stocks. With the IBB, you can get exposure in your portfolio to the tailwinds benefiting the entire biotech industry (an aging population, for example) without the risk inherent in picking out single stocks.

The SPDR S&P Biotechnology ETF (NYSEMKT:XBI) has a lower expense ratio than the IBB (0.35% vs 0.47%), but all 102 companies in the XBI have equal weighting. I prefer the IBB's method of weighting its holdings by market cap because it weights your exposure toward the large, established players rather than the clinical-stage small caps. After all, the point of choosing an ETF is to minimize risk.

Wade in slowly with big biotech

While an ETF is a great way to avoid much of the potential loss that can come with choosing the wrong individual stocks, you also lose out on some of the eye-popping gains that can come with investing in specific companies. If you're looking to research and invest in individual biotech stocks in hopes of higher returns, you might want to start with the least risky type of company: commercial-stage big biotech.

Large-cap drugmakers like Celgene (NASDAQ:CELG) are mature companies with a long track record of profitability. Their management has proven competent, the marketing teams have established connections, and both researchers and manufacturers have experience under their belts. The stocks of these large companies do not hinge on a single clinical trial because their cash flow comes from many different drugs. Celgene, for example, has eight approved drugs on the market. Revlimid, in particular, reliably brings in billions of dollars per year, and Pomalyst, Imnovid, Otezla, and Abraxane are also on track to clear the coveted billion-dollar blockbuster hurdle for 2017 sales.

Celgene isn't resting on its laurels, though -- the company also has a packed pipeline of drugs it's investigating for indications from multiple sclerosis to blood cancer. My favorite part of Celgene's strategy is the partnerships it's forged with other drugmakers. Celgene doesn't just focus on its internally developed pipeline; the company also loves to invest in smaller companies and early stage drugs while they're still in early innings. Not all of these investments will work out, but the deals are structured in a way that the funding comes via milestone payments. This means that Celgene has little to lose; Celgene only pays up if the drug succeeds in trials, at which point Celgene will usually become eligible for a royalty on sales -- it's a win-win.

None of this is to say that Celgene (or any investment, for that matter) is entirely without risk. Celgene's stock has lost a third of its value in the past month due to a single pipeline setback combined with weak quarterly earnings. However, I believe that an investor with a long-term mindset should see this as a great buying opportunity for a successful company with strong cash flow, a solid balance sheet, and plenty of upside in the years to come.

Take the plunge with small caps

With greater risk comes greater potential reward. Tiny biotechs with small product portfolios (or possibly even no commercial-stage drugs at all!) are the most exciting way to invest in the industry for those with a high tolerance for risk. Stocks whose value proposition rests with a single investigational compound are prone to utter implosion if the drug in question fails its trials. And failure is more likely than not -- greater than 90% of drugs entering trials never make it to approval.

If, however, you're willing to take on the additional risk, it can be smart to make a handful of small investments in early-stage companies because these stocks usually have so much more room to run than their more established brethren. If you choose wisely, you may wind up with the next Acadia Pharmaceuticals on your hands.

One small cap that looks particularly attractive to me right now is Celldex (NASDAQ:CLDX), which has a market cap of just $325 million (compared to Celgene's $80 billion). Celldex has given investors a bumpy ride over the years -- its market cap is down 90% from the days of peak optimism surrounding its drug Rintega. This brain cancer drug flopped in clinical trials, and many left the stock for dust, forgetting the rest of Celldex's pipeline.

However, I still see promise in pipeline drugs like Glemba, which aims to provide a cure for a very narrow but underserved population of breast cancer patients. Glemba has shown promise in mid-stage trials, and investors and patients alike are now waiting to see if the drug can impress once again in a late-stage study.

Success here would turn Celldex's fortunes around, as glemba's peak annual sales are estimated to be around $400 million. Since biotechs generally trade at mid-single-digit multiples of their sales figures, an approval for glemba alone would be enough to send Celldex soaring.

Make sure you don't forget...

...to diversify. Whichever strategy you choose, be mindful that you're not over-weighting your portfolio toward any one type of stock -- whether that be small cap, biotech, or even healthcare at large. A well-diversified portfolio is the key to long-term gains that don't put your entire nest egg at risk from a single company, type of stock, or sector falling out of favor.

If you keep diversification in mind, choose the level of risk that's right for you, and buy and hold for the long haul, you're well on your way to investing in biotech the Foolish way.