Please ensure Javascript is enabled for purposes of website accessibility
Log In Help Join The Motley Fool
Free Article Join Over 1 Million Premium Members And Get More In-Depth Stock Guidance and Research
By Rich Smith - Nov 8, 2017 at 7:37AM

Yemeni rebels pose a clear and present danger to Saudi Arabia -- and an opportunity for U.S. defense contractors.

On Saturday, November 4, Houthi rebels in Yemen launched a long-range Burkan 2-H missile ballistic missile targeting Saudi Arabia's King Khalid International Airport more than 600 miles away. Saudi Arabian forces confirmed the launch, and reported that a U.S.-built Patriot missile battery shot down the missile before it could reach its target.

For now, perhaps. But a rebel spokesman said that it considers that "the capital cities of" countries conducting military operations in Yemen "fair military target[s]," and promised they "will be struck by our missiles." Moreover, the BBC reports that the Houthis are believed to possess "a stockpile of Scud ballistic missiles and home-grown variants" such as the Burkan. In short, if Saudi Arabia hopes to protect its civilian population, it needs a robust missile defense.

Fortunately, Lockheed Martin (LMT) and Raytheon (RTN) can sell them one. 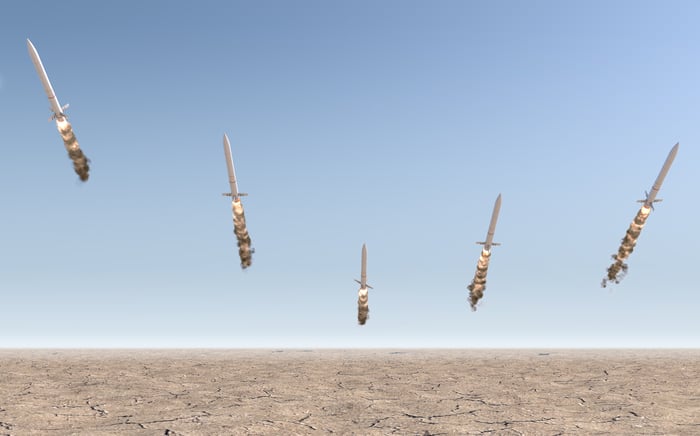 Saudi Arabia faces a threat -- and turns to Lockheed and Raytheon for a solution. Image source: Getty Images.

The Patriot missile battery that shot down Saturday's Scud-variant was built, of course, by Lockheed Martin (which builds the interceptors) and Raytheon (which builds the Patriot's radar and missile launcher). That combination worked well for Saudi Arabia on Saturday, but as the Defense Security Cooperation Agency (DSCA) confirmed last month, Saudi Arabia is gearing up to buy a much more powerful missile defense system -- and is ready to pay a very high price to acquire it.

Designed as an anti-aircraft defense system, Patriot rose to prominence when used as a stopgap measure to protect American troops, stationed in Saudi Arabia, from Scud missile attacks in the buildup to Desert Storm -- the first time the missile had been used for this purpose. In contrast, Lockheed Martin's new Terminal High Altitude Area Defense (THAAD) system was purpose-built to defend against ballistic missiles such as the one launched at King Khalid over the weekend.

As DSCA explained in a notification to Congress on October 6, the Saudis have requested permission to purchase 44 THAAD launchers and 360 THAAD Interceptor Missiles from Lockheed, with seven Raytheon-built AN/TPY-2 THAAD radars to guide them to their targets. Including other related and necessary equipment, the total value of Saudi Arabia's purchase is estimated at $15 billion.

DSCA noted that the primary threat THAAD is intended to defend against is "Iranian." Indeed, Saudi Arabia apparently first became interested in buying Lockheed's THAAD system back in 2010, not long after Congressional leaders began discussing a plan to begin bilateral talks with Iran, which would ultimately loosen controls over Iran's missile program.

But "other regional threats" were also cited as justifying the sale, and in particular, "the growing ballistic missile threat in the region" from weapons such as the Houthis' Burkan. Buying THAAD, said DSCA, "will substantially increase Saudi Arabia's capability to defend itself against" such threats -- from Iran, and from the Houthi rebels that Iran supports in Yemen.

The recent attack on Saudi Arabia's second largest airport adds urgency to the Saudi's request to purchase THAAD. At the same time, it's unlikely that Congress will withhold permission for the sale to proceed. In the entire history of the DSCA, Congress has never refused to approve an arms sale after receiving notification from DSCA. Ever.

As such, I'd say the likelihood of this sale going through looks pretty high, which is good news for Lockheed Martin. As the biggest beneficiary of the sale, Lockheed Martin stands to reap the bulk of the $15 billion in proceeds from this sale. What's more, these revenues will be funneled through Lockheed's Missiles and Fire Control division, the company's most profitable division, with an operating profit margin of 14.7% according to data from S&P Global Market Intelligence.

Raytheon's share of the $15 billion sales price will probably be smaller, but that's OK. Raytheon's Integrated Defense Systems division is the one that builds THAAD's AN/TPY-2, and Raytheon IDS earns a 17.3% profit margin on its revenues -- again, the most profitable division in the company.

Long story short, both Lockheed Martin and Raytheon stand to earn tidy profits from this sale when it likely goes through.